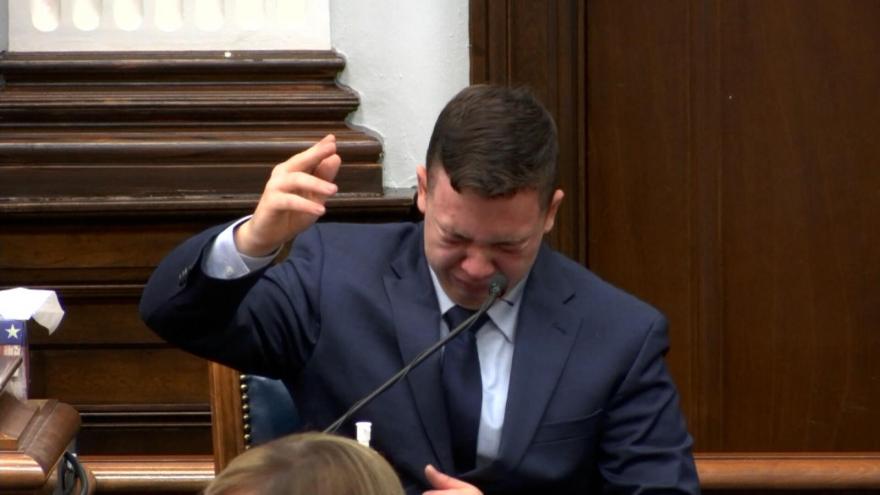 Kyle Rittenhouse's defense plans to call several more witnesses, including a doctor and a Kenosha Police officer, on November 11.

(CNN) -- The defense in the Kyle Rittenhouse homicide trial rested Thursday, a day after the 18-year-old took the stand and offered dramatic testimony interrupted by tears and several heated exchanges between the judge and prosecutor.

Defense lawyers called 10 witnesses during less than three days of testimony. The closely watched case has divided observers who view the young man as a do-gooder out protecting businesses from protesters and those who saw an armed vigilante out looking for trouble.

Rittenhouse's testimony was crucial to both the prosecution's and the defense's arguments about his actions on the night of August 25, 2020, when Rittenhouse shot at four people, killing two of them and wounding one. The prosecution has sought to show Rittenhouse's actions were reckless and criminal, while the defense has said he acted in self-defense.

Thursday's testimony lacked the emotion of the day before. Jurors heard from use-of-force expert John Black, who testified that less than three seconds passed between the time a protester fired a shot and Kyle Rittenhouse opened fire with his rifle in Kenosha, Wisconsin, last year.

And Drew Hernandez, who shot video of the protests, testified that Rittenhouse tried to deescalate tensions at one point the night of the shooting. He told the jury that Joseph Rosenbaum -- the first person to be shot -- was acting "physically aggressive" even before his encounter with Rittenhouse.

Hernandez, who now does commentary for a conservative media website, also testified that he witnessed Rosenbaum at first "charging" and then lunging at Rittenhouse when he fired.

Jurors seemed less engaged Thursday than when Rittenhouse took the stand to claim self defense one day earlier, according to a pool report.

Rittenhouse testified most of the day Wednesday and said that he acted in self-defense when he used an AR-15-style rifle to fatally shoot a man who had threatened him, threw a plastic bag at him and chased him.

"I didn't do anything wrong. I defended myself," he testified.

He testified he subsequently shot at three other people because one tried to kick him, one hit him with a skateboard and one pointed a gun at him.

But in cross-examination, Rittenhouse said that he knew the man who threw the bag, Rosenbaum, was unarmed at the time of the shooting. He admitted he did not know what Rosenbaum was thinking when he chased him -- but also stated confidently what he thought would have happened.

Rittenhouse broke down in tears at one point in his testimony, leading to a short break.

The prosecution's cross-examination also led to heated exchanges among the attorneys and judge in the case. Twice, Judge Bruce Schroeder asked the jury to leave the room and then sharply admonished prosecutor Thomas Binger for his line of questioning. The first incident related to questions about Rittenhouse's post-arrest silence, and the second was about an incident two weeks before the shootings that the judge said would not be permitted into evidence.

"Don't get brazen with me," Schroeder warned. "You know very well that an attorney can't go into these types of areas when the judge has already ruled without asking outside the presence of the jury to do so, so don't give me that."

The defense asked for a mistrial with prejudice due to the prosecution's questioning, and the judge said he would take it under advisement.

The prosecution rested its case Tuesday after calling 22 witnesses over six days. Their case was highlighted by testimony from an armed paramedic who was shot by Rittenhouse and a journalist who said the gunfire put him in danger.

The charges stem from the chaotic unrest in the wake of the Kenosha police shooting of Jacob Blake, a 29-year-old Black man. The events of that night, almost all captured on video, are hardly in dispute. The question before the jury is whether Rittenhouse's actions were reasonable.

Rittenhouse lays out the night of the shootings

Rittenhouse testified that he lived in Antioch, Illinois, with his mother and that his father lived in Kenosha. He said he went into Kenosha on August 25, 2020, with a rifle and small medic kit and joined up with a group of armed people in order to protect a car dealership and to provide first aid.

A man he identified as Rosenbaum, 36, twice threatened to kill Rittenhouse during the night, he testified. Later, Rittenhouse became separated from the other armed people, and Rosenbaum ran at him and threw a plastic bag at him. Rittenhouse testified he believed at the time the thrown object was a chain.

During the chase, another man nearby, Joshua Ziminski, fired a gunshot in the air, police detectives testified earlier in the trial. Ziminski has separately pleaded not guilty to three charges related to that night.

Seconds after that gunshot, Rittenhouse turned and saw Rosenbaum coming at him with his arms out front. He then shot Rosenbaum four times, killing him.

In cross-examination, he said he pointed the gun at Rosenbaum during the chase even though he knew that was a dangerous thing to do.

"He was chasing me, I was alone, he threatened to kill me earlier that night. I didn't want to have to shoot him," Rittenhouse testified. "I pointed it at him because he kept running at me and I didn't want him to chase me."

Rittenhouse then tried to run down the street to where police were situated to turn himself in, he testified, but a "mob was chasing me." While running, he became lightheaded and fell to the ground, he said.

An unknown person jumped at him trying to kick him, and Rittenhouse fired at the person twice. Anthony Huber, 26, then came at him, struck him with a skateboard, and grabbed his gun, he testified. Rittenhouse shot him once in the chest, killing him.

Much of the cross-examination centered on why Rittenhouse brought an AR-15-style rifle into an already volatile situation in Kenosha. Rittenhouse explained he did so to protect himself, even as he said he didn't necessarily think he would be in danger.

"I brought the gun for my protection, but I didn't think I would have to use the gun and end up defending myself," he testified. He also said he did not think carrying a rifle would "cause a negative reaction" among the crowd.