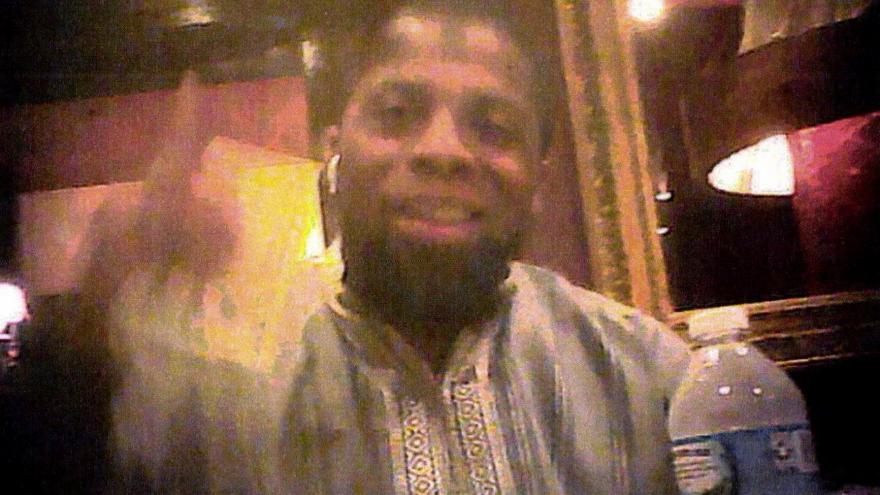 Jason Brown is the purported leader of the \"AHK Street Gang,\" a gang in the Chicago area that traffics various narcotics throughout the city region, including heroin and cocaine, according to the Department of Justice. Source: Federal court record via WBBM
By Omar Jimenez, CNN

(CNN) -- He is the purported leader of the "AHK Street Gang," a gang in the Chicago area that traffics various narcotics throughout the city region, including heroin and cocaine, according to the Department of Justice.

But Thursday, Jason Brown stepped into a federal courtroom not on drug charges, but for allegedly attempting to provide material support to ISIS.

Specifically, the Department of Justice alleges that on three separate occasions this year, "Brown provided $500 to a confidential source with the intent that the $500 be wired to an individual Brown believed was an ISIS soldier engaged in active combat in Syria." That individual was confidentially working with law enforcement, the DOJ says.

The larger question now is: how might have an alleged Chicago area gang leader gotten wrapped up with ISIS?

While Brown was serving time for a previous arrest in 2016, the criminal complaint alleges, he was "radicalized in prison." An expert says Western prisons have become a key recruiting ground for ISIS over the past decade.

"ISIS has manipulated its ideology to appeal to people with criminal backgrounds," said Bennett Clifford, a research fellow at the Program on Extremism at the George Washington University. "This is one of the notable areas where the Islamic State has been able to recruit."

One of the aspects Clifford says ISIS has tried to hone in on is the idea that previous wrongdoings don't matter. Oftentimes they're even viewed as a positive. Clifford specifically pointed to one propaganda poster cited in a report from the International Centre for the Study of Radicalisation and Political Violence in London. The poster reads, "Sometimes people with the worst pasts create the best futures."

Once Brown, also known as "Abdul Ja'Me," was out of prison, helming the AHK gang, the Department of Justice alleges, he is believed to have used "his position as the leader of the AHK street gang to actively recruit and radicalize AHK members and others to support ISIS."

The criminal complaint in Osadzinski's case alleges he designed a process to make ISIS propaganda more conveniently accessed and disseminated by users on a social media platform.

If both Brown and Osadzinski are found guilty, the material support charge is punishable by up to 20 years in prison.

Clifford has called for the implementation of "effective, data-driven" terrorism prevention programs in the US federal correctional system, he says that inmates can be especially vulnerable to radicalization.

"Who they interact with inside makes a huge difference," said Clifford.

A judge ruled Thursday that Brown would remain in US Marshal custody pending any further court proceedings. Osadzinski has a court appearance Friday. CNN has reached out to his lawyer for comment.