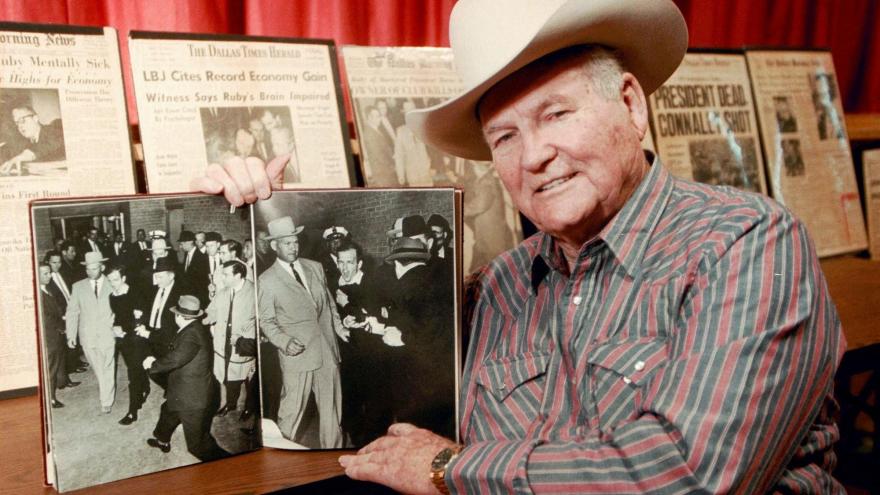 Jim Leavelle, seen here in 1998, holds the photograph showing him handcuffed to Lee Harvey Oswald when Oswald was shot by Jack Ruby.

(CNN) -- James Leavelle, the Dallas detective who was handcuffed to Lee Harvey Oswald when Oswald was fatally shot, has died, his family told CNN.

Leavelle shot to fame after he was photographed next to Oswald, the man who assassinated President John F. Kennedy, in November 1963. He was escorting the gunman through the basement of the Dallas police headquarters when Jack Ruby shot Oswald in an iconic moment that was shown on live television and captured in a now-famous photo.

"He was an incredibly special man to the city of Dallas and we are so lucky to have known him as a father, grandfather and great-grandfather," Griendling said.

Oswald, an ex-Marine, assassinated Kennedy on November 22, 1963, and shot Dallas police officer J.D. Tippit 45 minutes later. He was arrested in the back of a movie theater where he fled after the shootings.

In 2013, Leavelle told CNN he wished Oswald had not been shot.

"I was hoping to save my prisoner and I didn't. That goes through my mind more than anything else," he said.

Ruby was convicted for the murder of Oswald. The conviction was overturned on appeal, and he died of cancer in 1967 while awaiting a new trial.

More than two decades earlier, Leavelle was stationed on the USS Whitney when Japanese forces attacked Pearl Harbor on December 7, 1941. He escaped without injury.

Two dead satellites might collide above the US today

McDonald's is fighting the breakfast war with chicken sandwiches