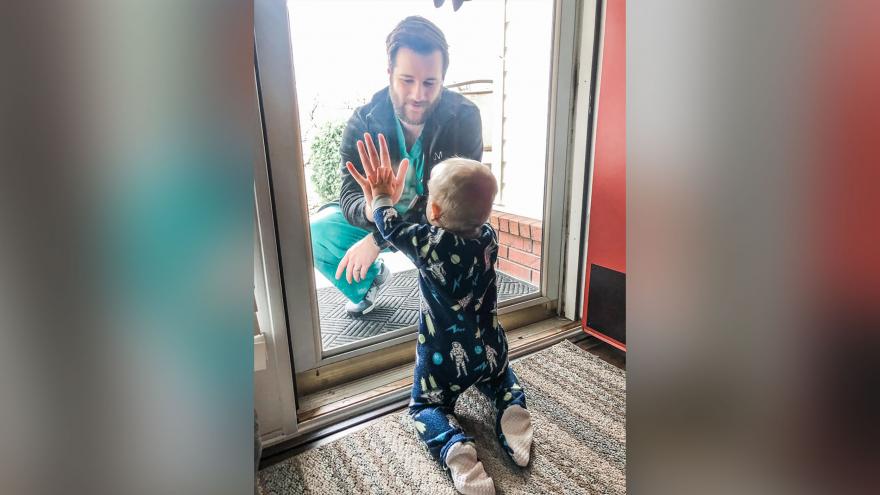 A resident physician, who touched the lives of thousands when a photo of him and his son separated by glass went viral, has lost his family home to a tornado. Credit: Alyssa Burks/Facebook
By Alaa Elassar, CNN

(CNN) -- A resident physician, who touched the lives of thousands when a photo of him and his son separated by glass went viral, has lost his family home to a tornado.

Dr. Jared Burks was on a break from working at the hospital -- where he is on the frontlines of fighting the coronavirus pandemic -- when a tornado struck and destroyed his family's home in Jonesboro, Arkansas on Saturday.

"We are all safe," his wife, Alyssa Burks, wrote on Facebook. "Our house is gone. Jared was inside, but he survived by the grace of God. Zeke and I were at my mom's house. Please pray for us as we begin to pick up the pieces."

At least 22 people were injured when the tornado ripped through the city.

Alyssa Burks posted a photo of Jared with their one-year-old son, Zeke, on Facebook just days before the tornado destroyed their home. In the now-viral image, Jared Burks and Zeke knelt on opposite sides of a glass door, touching palms.

Jared Burks has been living apart from his wife and son for more than two weeks to protect them while he treats patients who have contracted the coronavirus.

"As soon as he saw his dad he just raced to the door," Alyssa Burks told CNN affiliate KATV. "He got up on the glass because I think he wanted him to hold him, so it was sad, it was cute, but it was really heartbreaking because it's hard."

Evan Clower, Alyssa Burks' best friend, created a GoFundMe on Saturday to help the family rebuild after the tornado. By Sunday evening, more than $50,000 had been raised, with people sharing hundreds of kind messages to the family.

"I donated because this wonderful family sacrificed for the sake of us all during this time, despite the loss of their home," one donor wrote. "Build bigger and better! My prayers are with you every day!"

There are more confirmed cases of the coronavirus in the United States than any other country. Health care workers across the country are working around the clock to stop it from spreading, but are quickly running out of medical supplies.

Health officials say the best way to protect medical workers and help them counter the pandemic is to practice social distancing.