The FBI is investigating the Texas hostage standoff as a 'terrorism-related' incident, the agency says 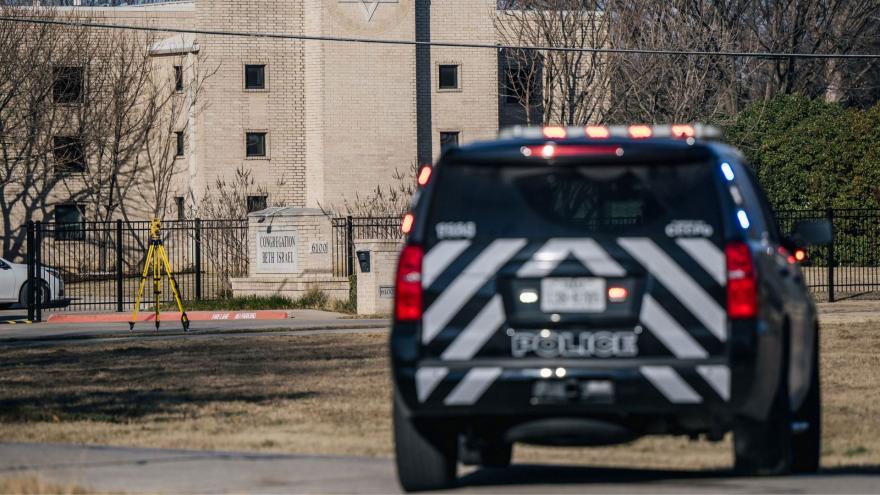 (CNN) -- As the FBI investigates the Colleyville, Texas, hostage standoff as terror-related, the rabbi who was officiating services at the synagogue recalled Monday tossing a chair at the armed intruder before he and his congregants escaped.

Recounting Saturday's "terrifying" encounter to CBS, Rabbi Charlie Cytron-Walker said his experience as a "calm presence" in hospital rooms and other difficult moments helped him remain collected during the hostage situation.

The deceased hostage taker -- who authorities have identified as 44-year-old Malik Faisal Akram -- first knocked on a glass door, and Cytron-Walker thought he needed shelter, he said. He let him in, made him tea and didn't find anything suspicious, the rabbi told CBS.

It was during the Sabbath service's prayer, when the rabbi had his back turned as he and the other worshipers faced Jerusalem, that he heard a click, he said.

"It turned out that it was his gun," Cytron-Walker told the network.

He's taken security courses focusing on this type of situation, which taught him he needed to get himself and his flock to safety. There was a moment during the hostage negotiations in which Akram was not getting what he wanted, and "it didn't look good. It didn't sound good. We were terrified," the rabbi said. That's when he decided to take a chance on escaping.

"When I saw an opportunity where he wasn't in a good position, I made sure the two gentlemen who were still with me that they were ready to go. The exit wasn't too far away," he told CBS. "I told them to go. I threw a chair at the gunman and I headed for the door, and all three of us were able to get out without even a shot being fired."

An FBI team killed Akram after the hostages were released around 9 p.m. (10 p.m. ET).

Video from CNN affiliate WFAA shows a police vehicle outside the synagogue when two people burst through a door, followed by another person. A fourth figure, who WFAA identified as Akram, then steps out of the doorway with his arm extended as if he's holding a gun.

As a dog barks and officers in tactical gear run around the church, four gunshots erupt followed by a loud explosion, the video shows. About 15 seconds later, several more gunshots are heard.

Attacks on Jewish people are on the rise, the Anti-Defamation League warns. While the majority of the anti-Semitic incidents involve harassment and vandalism, there have also been assaults, and on at least six occasions since 2016, attacks have turned deadly.

'This is a terrorism-related matter'

Expressing its relief the hostages were not physically hurt and touting its focus on extremist threats to the Jewish community, the FBI noted Akram "spoke repeatedly about a convicted terrorist who is serving an 86-year prison sentence in the United States," its statement said.

"This is a terrorism-related matter, in which the Jewish community was targeted, and is being investigated by the Joint Terrorism Task Force," the statement said, declining to provide more details due to the continuing investigation.

FBI Director Chris Wray is holding a call with the Jewish community Monday afternoon. Later Monday, Cytron-Walker will lead a healing service at a Methodist church in nearby Southlake.

The convicted terrorist the FBI mentions is believed to be Aafia Siddiqui, who is serving a lengthy federal prison sentence in Fort Worth after being found guilty of attempted murder and other charges in an assault on US officers in Afghanistan. She was not involved in the Colleyville attack, her attorney said Saturday.

Akram, a British national, was armed when he entered Congregation Beth Israel on Saturday morning as the house of worship livestreamed its Sabbath service on Facebook and Zoom, Colleyville Police Chief Michael Miller said. The livestream captured a portion of the 11-hour standoff before ending.

Hostage taker arrived in the US weeks ago

Akram arrived legally, a separate federal law enforcement source said, and was vetted before his arrival, meaning his information would've been cross-checked with classified and unclassified information available at the time. He was on no US government watch list, the source said.

British intelligence told its US counterparts a preliminary review of its databases showed no worrying information on Akram, the source said, but UK authorities continue to investigate.

Between January 6 and 13, Akram spent three nights at Union Gospel Mission Dallas, a homeless shelter, according to shelter CEO Bruce Butler. "We were a way station for him," he said. "He had a plan. He was very quiet. He was in and out."

Akram left the mission for the last time Thursday, according to their records. Butler did "not recall seeing him, but he was not there long enough to build any relationships. We had a lot of new faces coming in because of the cold weather," he said.

Based on discussions with Akram as well as audio from the livestream, officials believe Akram was motivated by a desire to see the release of Siddiqui, who is serving an 86-year sentence in Fort Worth's Federal Medical Center, Carswell after being found guilty of seven charges, including attempted murder and armed assault, in a 2008 attack on US officers in Afghanistan.

Siddiqui "has absolutely no involvement with" the taking of hostages in Texas, her attorney said.

Akram's brother says the family is "absolutely devastated" by his actions and they "apologize wholeheartedly to all the victims," he wrote in a statement on Facebook, adding the family was in contact with police during the incident. Akram suffered from mental health issues, the statement said without elaborating.

"In the last hour of our hostage crisis, the gunman became increasingly belligerent and threatening," Cytron-Walker said. "Without the instruction we received, we would not have been prepared to act and flee when the situation presented itself."

Founded in 2004, the nonprofit network says it's the "official homeland security and safety initiative of the organized Jewish community in North America." It works to develop "strategic frameworks that enhance safety and security of the Jewish people" and has an online training portal and "e-tool chest" with security checklists and other resources to supplement its training courses, which include information from the US Department of Homeland Security and other agencies.

A member of the congregation watched the livestream for more than an hour, listening to Akram yelling in different languages, she said. The suspect vacillated between being apologetic and "screaming hysterically," talking repeatedly about how he hated Jewish people, she said.

"At any moment, I thought there was going to be a gunshot," the member said, adding Akram claimed to have a bomb.

As the standoff came to a close, a nearby CNN team heard a bang followed by a short blast of rapid gunfire coming from the synagogue's direction.

Investigators recovered a firearm they believe belonged to Akram, the Bureau of Alcohol, Tobacco, Firearms and Explosives said.

A community comes together

During and after the ordeal, the local Jewish community and those of other faiths issued expressions of support for the synagogue. Congregant Anna Salton Eisen was moved by how neighbors -- and state and national leaders, including Gov. Greg Abbott and President Joe Biden -- conveyed their sympathies, she said.

UK Prime Minister Boris Johnson also denounced the attack, saying he stood with Jewish communities around the world "against those who seek to spread hate and fear," a spokesman said.

"The response from our neighbors, communities, from law enforcement, from churches, from mosques, was so overwhelming and intense and immediate that I really feel like if we have to face a crisis, that people will have our back," Eisen said.

Asked how the congregation will respond, she said, "For all of us, the first thing is regaining some sense of safety." She was already feeling safer, she said, because of the resolve shown by those around them.

"We are welcome and a part of this community," she said. "Even though anti-Semitism may be increasing and may be present, so is the remedy, so is the unity and the strength and the resolve to overcome these issues."

Cytron-Walker works to bring together members of the Christian, Jewish and Islamic faiths in the metro area, leaders from the Islamic Center of Southlake said.

The rabbi brought sweets to their Eid festival and attends festivities during the Islamic holy month of Ramadan, former center president Shahzad Mahmud said. Cytron-Walker and his wife have been friends of the Islamic center since "Day One," Mahmud said.

"We want to make sure that the Jewish community knows that we stand with them as they always stand with us when we feel like we are in trouble by criminals," Mahmud said.

In a Sunday Facebook post, Cytron-Walker said, "I am thankful and filled with appreciation for all of the vigils and prayers and love and support, all of the law enforcement and first responders who cared for us, all of the security training that helped save us.