The Florida official who set up a vaccine site for affluent ZIP codes and created a VIP list is under investigation, sheriff's office says 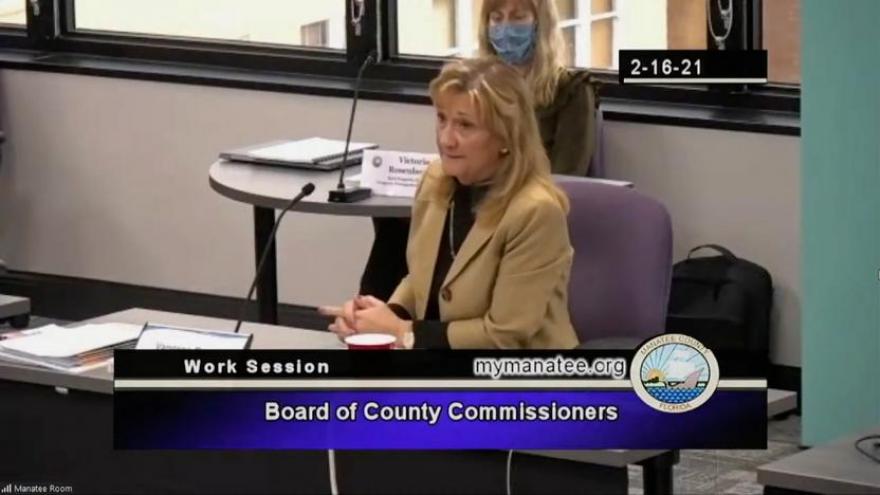 Vanessa Baugh is under investigation for organizing a vaccine drive limited to two ZIP codes.

(CNN) -- A Florida sheriff's office is investigating whether a Manatee County official broke the law when she organized a Covid-19 vaccine drive limited to two of the county's most affluent ZIP codes.

The Manatee County Sheriff's Office said it has launched the investigation after a citizen watchdog filed a complaint regarding County Commissioner Vanessa Baugh, who last week admitted she chose the ZIP codes herself and also selected some people for the vaccination list, so she and others could access the Covid-19 vaccine.

In a complaint to the sheriff's office, Michael Barfield, a paralegal consultant and resident of neighboring Sarasota County, said Baugh, who chairs the commission, may have violated three statutory provisions, including misuse of her public position.

"When Baugh inserted individuals and herself on a Covid-19 vaccine distribution list she acted contrary to the adopted Vaccine Standby Pool and used her official position to secure a special privilege, benefit, or exemption for herself and others," which could constitute misuse of her government position, Barfield, who also is president of the executive committee of the Florida ACLU board, wrote in the complaint.

CNN reached out Wednesday to Baugh's office regarding the investigation and has not heard back.

Baugh, chair of the Board of County Commissioners and a staunch supporter of Gov. Ron DeSantis, said the "pop-up" vaccine drive was initiated by the Republican governor after he spoke with Rex Jensen, a real estate developer and CEO of the parent company of Lakewood Ranch, the community where the vaccine drive was organized.

The commissioner said in a meeting last week that it was "(her) idea" to choose the two ZIP codes in the county whose residents were permitted to get vaccinated at the vaccine drive, though she didn't explain her rationale.

The governor has been criticized for the "pop-up" vaccination sites he has organized around the state. At a news conference Tuesday, he referred to the criticism as an "attack" on him for "vaccinating seniors."

"When we visit these communities where we were able to do it, they're so, so thankful," DeSantis said.

Baugh apologized last week for organizing the drive but then said she'd "do exactly what (she) did this time" if presented with the same opportunity.

The so-called VIP list was mentioned in emails from Baugh obtained by CNN and the Bradenton Herald was the first to report. The few members who were on the list were qualified to receive the vaccine, but by joining the list, Baugh guaranteed they'd skip the line, CNN reported last week.

Manatee County had previously been lauded by DeSantis for its effectiveness at vaccinating people and standing up one of the first drive-thru vaccination programs in the US. Last week, the governor threatened to withhold additional doses from the county after Baugh was criticized. He has not criticized Baugh or her methodology in organizing his vaccine drive.

Residents of Manatee County fumed at Baugh for her actions and some called for her resignation in emails to the official, obtained by CNN through a public records request.

"My blood has been boiling over this elitist vaccine event," wrote one resident, in an email dated February 18. "We all appreciate the extra vaccines but to single out 2 zip codes to receive it smacks of politics, favoritism, elitism, and racism. That is the issue."

Baugh responded to at least one of the residents who emailed her.

In one email dated February 17, a county resident wrote, "So, since I live in the wrong zip code I need to wait on a vaccine. SHAME ON YOU."

"I'm not ashamed!" Baugh wrote back. "Quite the contrary, the Manatee registry was reduced by 3000 people and Manatee is busy calling to fill 5200 spaces for the vaccine... This is a win for Manatee thanks to Gov DeSantis..."

One resident, who said they lived in one of the two zip codes Baugh selected for the drive, thanked Baugh in an email and said she "did her job."

Amid calls for her resignation, Baugh provided a statement on Monday to CNN Sarasotaaffiliate WWSB.

"I have apologized to my constituents and my colleagues for a lapse in judgment," she wrote, according to WWSB. "These petty partisan political calls are nothing more than the divisive politics our Nation needs to steer away from. I will continue working to bring more vaccines to Manatee County and lead us through this pandemic."

The county commission, by a 4-3 vote on Tuesday, rejected a motion asking Baugh to resign as chairman.