The gates were locked, a boy dying in a woman's arms inside. This is what police have learned about the mass shooting in Orange, California 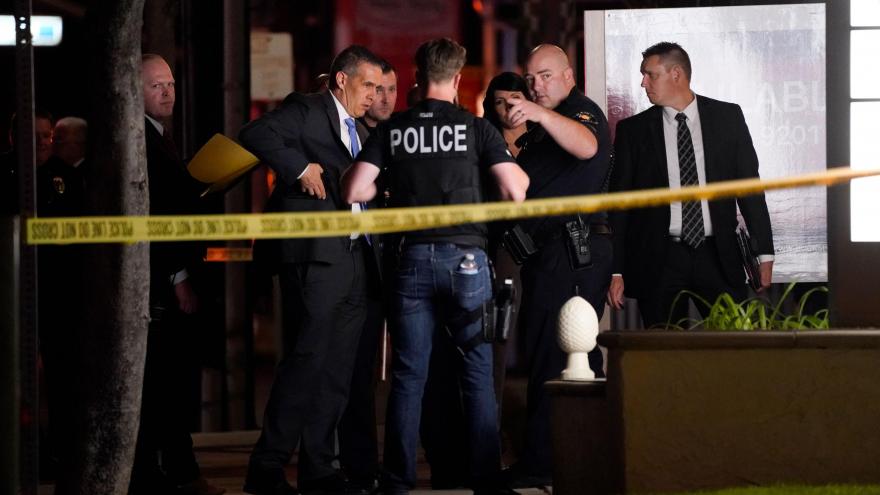 Investigators gather outside an office building where a shooting occurred in Orange, Calif. on March 31. - Jae C. Hong/AP

(CNN) -- When police were finally able to enter the courtyard of the business complex in Orange, California -- where four people were fatally shot Wednesday -- they found a woman holding a wounded 9-year-old boy.

"It appears that a little boy died in his mother's arms as she was trying to save him during this horrific massacre," Orange County District Attorney Todd Spitzer said at a news conference Thursday, though he later added the exact nature of their relationship was still under investigation.

The killings marked at least the 20th mass shooting since the attacks at Atlanta-area spas two weeks ago. Although investigations are still underway, police have begun to uncover what happened behind the locked gates of the courtyard, where the doors into the suites are, as well as what led up to the horrific violence.

"The preliminary motive is believed to be related to a business and personal relationship which existed between the suspect and all of the victims," Orange Police Department spokesperson Lt. Jennifer Amat said in a news conference Thursday.

"This was not a random act of violence," she said.

Five calls to 911 came in around 5:34 p.m., Amat said, and officers were at the complex about 30 miles south of Los Angeles about two minutes later.

When they arrived, they heard shots being fired inside, but they were not able to enter immediately. From the inside, gates to the building's courtyard were locked "using a bicycle-type cable lock," Amat said.

It is unclear if they were meant to keep the victims inside or officers out, police officials said.

What police found when they entered

After engaging with the suspect and firing shots, police used bolt cutters to enter the courtyard and found the suspect, who was injured, and took him into custody. Police had earlier said it was unclear whether his injury was self-inflicted.

In the courtyard, police also found the boy and the adult woman who survived. She was taken to a local hospital, where she is in critical but stable condition, Amat said.

Besides the boy, those killed were two women and a man, Amat said.

The suites where some victims were found belonged to a business identified as Unified Homes, Amat said, a real estate business specializing in mobile homes.

Investigators recovered a semi-automatic handgun and a backpack containing pepper spray, handcuffs and ammunition, which authorities believe belonged to the suspect.

"Our condolences go out to all of the victims and their loved ones," the department said in a Facebook post.

Police identified the suspect as Aminadab Gaxiola Gonzalez, 44, of Fullerton, California. He is at a local hospital in critical but stable condition, Amat said.

But the hearing was delayed until Monday. Public defender Ken Morrison told CNN that Gonzalez is not in a condition to be able to make an intelligent decision on his case and is not conscious at the time.

Gonzalez will also face felony enhancements for firearms and a premeditation charge, according to a news release from the Orange County District Attorney's Office.

"Prosecutors are also alleging the special circumstance of multiple murders," according to the district attorney's office.

Gonzalez, who is believed to have been living in a motel room in Anaheim, arrived at the complex in a rental car and parked it in a lot nearby, Amat said.

Authorities remained on scene Thursday to complete the investigation.

Spitzer said investigators were there for two reasons: to investigate the mass shooting, as well as the officer-involved shooting aspect of the case, to ensure both objectivity and transparency.

Spitzer emphasized that the suspect is eligible for the death penalty under California law because there were multiple victims.

Prosecutors are also looking into whether the fact that the gates were locked constitutes "lying in wait," Spitzer said, a special circumstance that would also make the suspect eligible for the death penalty.

During his tenure, Spitzer said he had reviewed nearly 20 murder cases for whether to pursue the death penalty, but he has never filed one death case.

"Asking a jury to pass down a verdict of death is the most serious consequence we ask, and it's the only consequence where a jury makes the decision as opposed to a judge," he said.

California has a moratorium in effect for its death penalty, under an executive order signed by Gov. Gavin Newsom in March 2019.