The government already knows how to end school lunch shaming 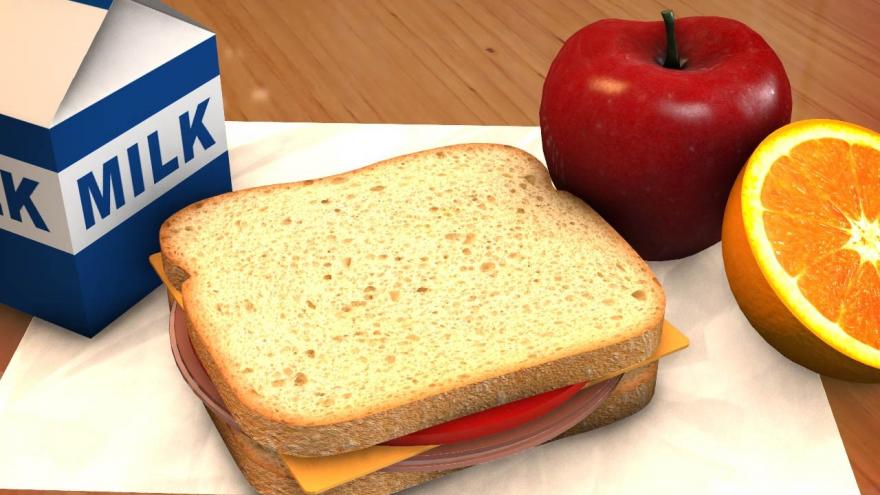 Analysis by Zachary B. Wolf, CNN

(CNN) -- School lunch shaming was back in the news last week when a Rhode Island school district prepared to serve a separate cold meal -- sun butter and jelly sandwiches -- to students with lunch debt.

That a local diner owner had offered to help pay down some of the debt but had been rebuffed helped give that particular story some national attention. After that led to outrage, the school district backed down.

Despite some state laws banning the practice of singling out students with unpaid lunch debt and proposals for a federal law that would end it nationwide, it is alive and well in some areas, although the public shaming of school districts that engage in it may provide its own sort of remedy.

In Rhode Island, the district planned to serve separate lunches. In other cases, kids have been forced to wear stamps or wristbands that identify them as having debt. In Minnesota, students with lunch debt at one high school were going to be kept from their graduation ceremony.

The mother of Philando Castile, the 32-year-old cafeteria worker fatally shot during a police traffic stop in 2016, used his foundation to pay the lunch debts of students who had been told they could not take part in graduation ceremonies.

"The kids shouldn't have a debt hanging over their heads, and the parents shouldn't either. I just believe that the schools should furnish free meals for our children," Valerie Castile told NPR.

"Most people are living paycheck to paycheck, and before you get that paycheck in your hand, it's already been taxed. ... I think they should let these children eat a free meal because that may be the only meal they have for the day."

It's the federal government, in the form of US Department of Agriculture regulations, that requires school districts -- already strapped for cash -- to seek payment for unpaid balances, although it does not mandate how. It was after new guidelines were issued before the 2017-18 school year requiring districts to address the issue that a fresh raft of school lunch shaming stories bubbled up, according to Diane Pratt-Heavner of the School Nutrition Association, which represents school lunch providers and advocates for free school lunches for all children.

Most districts avoid the practice of publicly identifying students with lunch debt, however, and instead use online payment programs, find ways to contact parents about their debts other than through their children or accept charitable contributions, according to the School Nutrition Association.

"The people working in cafeterias and the school district administrators know how important these meals are to students and they want to make sure students are fed," said Pratt-Heavner. "It's just a horrible situation that these funding issues are getting in the way of being able to make sure that kids have the nourishment they need to focus in class."

The USDA mandates that school districts must identify and get qualifying families to apply for free or reduced-price lunches. Families that earn 130% of the poverty level ($32,640 annually for a family of four) or less can get free lunches. Families making between 130% and 185% can be charged no more than 40 cents per lunch.

The US government spends more than $22 billion annually on its childhood nutrition program and the bulk of that goes to school lunches and other meals, according to the USDA. The Trump administration has proposed cuts to the program that would equal $1.7 billion over 10 years.

The issue has not come up much on the 2020 campaign trail, but you could easily imagine Castile's words coming out of the mouth of Cory Booker or Elizabeth Warren, both of whom have proposed new social welfare programs. Booker has a "baby bond" proposal to give every child a nest egg and fund it during their childhood. Warren wants to provide every parent with child care.

What those proposals share is that every person -- regardless of income -- would get the benefit. And that's also the idea behind perhaps the most effective way to end lunch debt shaming, which would be to just give every student lunch. But that would require a serious investment. Just the half measure of expanding free lunch to those students who currently get reduced-price lunches would cost $6 billion over 10 years, according to a 2015 assessment by the Congressional Budget Office.

In fact, the federal government does pay for universal school lunches in some jurisdictions -- including the nation's largest school district, in New York City, and other cities like Dallas -- if most of the student body qualifies for assistance.

The Community Eligibility Provision was launched after passage of the Healthy, Hunger-Free Kids Act, which passed with bipartisan support and was signed into law by President Barack Obama in 2010. More than 4,500 districts nationwide take part.

According to USDA, however, that's just a fraction of the districts eligible. About 45% of the schools participating in the national school lunch program would be eligible to participate in the Community Eligibility Provision program, but only half of those do, according to a USDA spokesman.

"We do not know how many students attending CEP schools choose to eat school lunch, but we do know the number of children enrolled in schools participating in CEP," said the USDA in an emailed statement. "The enrollment number includes students who choose to eat a school lunch as well as those who do not (for example, students who choose to bring a lunch from home). As of October 2018, 11.3 million children are enrolled in the 24,000 schools participating in CEP."

But some districts have left the program after having to kick in district funds in addition tofederal money and others, citing how complicated qualifying can be, have avoided it. In what winds up beinga good list of the pros and cons at the local level, the Evansville Courier & Press recently reported on why the school district there has not taken part in the Community Eligibility Provision program: In short, there was concern by local administrators that the program could jeopardize other federal funding.

The Trump administration has also suggested some changes to make it more difficult for districts to qualify. New York qualified only after a concerted effort to better track the eligibility of its students.

The Healthy, Hunger-Free Kids Act, championed by Michelle Obama, may be more famous today for the school lunch wars of the following years, when some students complained about having to eat healthier food that comported with the new federal guidelines. And that element is still debated. The Trump administration, in the form of Agriculture Secretary Sonny Perdue, recently rolled back some deadlines, including for lowering sodium in school lunches. Perdue said he was trying to "make school meals great again," but he was pilloried for it by "The Daily Show."