The helicopter carrying Kobe Bryant and 8 others lacked several recommended features. And it was just 20 to 30 feet from clearing a hilltop 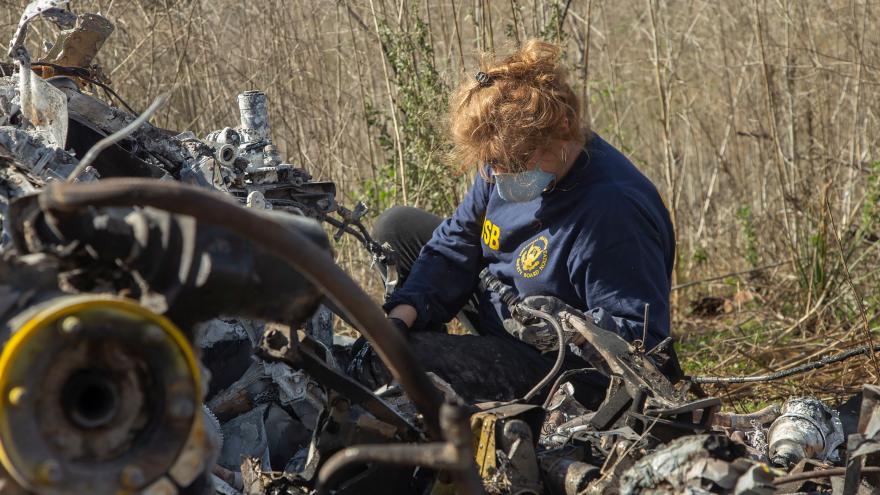 (CNN) -- If the helicopter had been 30 feet higher, millions of people might not be in mourning.

The aircraft carrying basketball legend Kobe Bryant and eight others crashed into a hillside and missed the top of the hill by 20 to 30 feet, the National Transportation Safety Board said.

"The descent rate for the helicopter was over 2,000 feet a minute," Homendy said. "This is a pretty steep descent at high speed."

Investigators are trying to determine what caused the crash and whether the pilot should have been granted special permission to fly in the foggy conditions Sunday morning.

Visual flight rules require pilots to stay clear of clouds and in good visibility while using both visual and instrument navigation.

Investigators are also looking into whether a safety system -- recommended by federal authorities years ago -- could have prevented the tragedy.

The Sikorsky S-76B helicopter, built in 1991, did not have a terrain awareness and warning system (TAWS), Homendy said.

TAWS is a safety feature that alerts pilots when they might hit terrain.

After a 2004 helicopter crash in Texas that killed 10 people, the NTSB recommended all new and existing helicopters with six or more passenger seats be equipped with TAWS, Homendy said.

But the NTSB doesn't have the authority to set new rules based on recommendations. That's up to the Federal Aviation Administration, which didn't implement the recommendation, Homendy said.

An FAA spokesman did not provide a direct response Wednesday to CNN's request for explanation on why the agency did not make TAWS mandatory for all helicopters.

The FAA has estimated that TAWS would cost "$35,000 per helicopter for equipment and installation, plus $7,000 for revenue loss for equipment downtime," according to a government document from 2014.

The FAA must consider cost-benefit analyses before making new rules, said Peter Goelz, a former managing director of the NTSB.

But Goelz said he and other aviation experts believe "when it comes to safety, the cost-benefit analysis should never be the final call."

He said some helicopter pilots may consider TAWS to be a nuisance, especially in good conditions when the terrain is visible but the alerts keep going off.

"If you have a device in a helicopter, which is often flying at low altitudes, often (TAWS) will go off and you will get alerts and that will cause the pilot to ignore it," Goelz said.

But he said that concern is "overstated."

"You can calibrate these things very carefully," he said. "The workload argument doesn't hold up when you weigh it against the safety benefits."

Island Express declined to comment on why the aircraft did not have TAWS.

"Because this is an ongoing investigation, Island Express defers comment on this matter to the NTSB," according to a company statement.

TAWS isn't the only recommended feature that wasn't on the helicopter. The aircraft also lacked a cockpit voice recorder and a flight data recorder, Homendy said.

"Having a CVR and an FDR would have helped us significantly in this investigation," the NTSB member said.

When contacted by CNN, Island Express declined to say why the helicopter didn't have the recorders, citing the ongoing investigation.

Goelz said one reason used in the past for why some helicopters lack flight data recorders was that the devices were "too big and too heavy."

But "they have now miniaturized them -- they are 5 pounds at the most," Goelz said.

"The idea that these kinds of devices aren't mandatory is really unacceptable."

What was found at the scene

While investigators won't find a cockpit voice recorder or flight data recorder, they did find debris stretching over 500 feet, the NTSB said.

The agency recovered an iPad, a cell phone and documents such as the helicopter's maintenance records, registration and airworthiness certificate.

Timeline: Here's what happened in the minutes before crash

Homendy said the NTSB will release its preliminary report on the crash in about 10 days -- but it won't answer everyone's questions.

She said a final report will be out in about 12 to 18 months.

While Bryant was the most famous passenger in the helicopter, families want the public to remember the lives of all nine people on board.

Christina Mauser was an assistant girls basketball coach, former teacher and mother of three. Her youngest daughter is turning 4 next week.

Mauser had been recruited by Bryant himself to help coach a team in his basketball academy, her husband Matt Mauser said. She was one of several parents killed in the crash.

Pilot Ara Zobayan was also killed in the crash. Neighbors and fellow pilots remember him as a lovable, affable man.

The three youngest victims were all headed to a youth basketball game.

Alyssa Altobelli was flying with her parents, John and Keri.

And Payton Chester was flying with her mother, Sarah Chester.

Todd Schmidt, a former principal at the elementary school Payton once attended, said the Chesters were just as important as Bryant.

"While the world mourns the loss of a dynamic athlete and humanitarian, I mourn the loss of two people just as important," Schmidt wrote on Facebook.

He said "their impact was just as meaningful, their loss will be just as keenly felt, and our hearts are just as broken."