The hottest show in Las Vegas right now is the snow 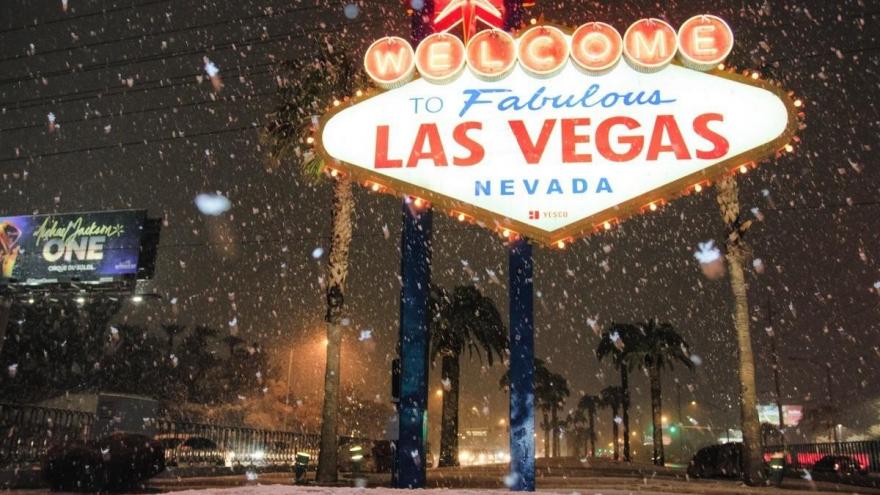 A winter storm working its way through the Southwest dusted Las Vegas with half an inch of snow Wednesday, a record for this date, according to the National Weather Service.

(CNN) -- Oh, the things you can do in Sin City. You can gamble, hit up an all-you-can eat buffet or catch a show.

But, this month at least, the best show just might be outside.

A winter storm working its way through the Southwest dusted Las Vegas with half an inch of snow Wednesday, a record for this date, according to the National Weather Service.

Snow amounts were even higher -- from 1 to 3 inches -- in areas around Las Vegas, CNN affiliate KLAS reported.

So all the tourists lined up Wednesday in front of the famous "Welcome to Fabulous Las Vegas Nevada" sign had a nice snowy backdrop for their photos. And all of those gamblers scurrying between the casinos on the Strip looked like they were walking around in neon-lighted snow globe.

But this wasn't even the first snowfall of this month. Las Vegas also had trace amounts of snow fall on February 10 and on Sunday and Monday of this week.

Multiple snow days in February aren't common in Las Vegas. Since 1937, February has seen more than three snowfall days only twice -- the last time in 1949.

The last time Las Vegas had any measurable snow was just over a decade ago, when 3.6 inches fell on December 17, 2008. So this month's output must make Vegas residents feel like someone turned on a snow machine.

Snow isn't unheard of in Las Vegas, but hefty accumulations of it are fairly rare. The biggest snowfall there, according to National Weather Service records, occurred in January 1949, when 16.7 inches of snow came down that month. The snowiest February happened in 1939, when 4.1 inches fell.

The current snow show isn't over yet. The weather service predicts Las Vegas will get an additional accumulation of up to half an inch of snow on Thursday.

If this weather show keeps up, those crafty business people in Vegas just might start charging admission.