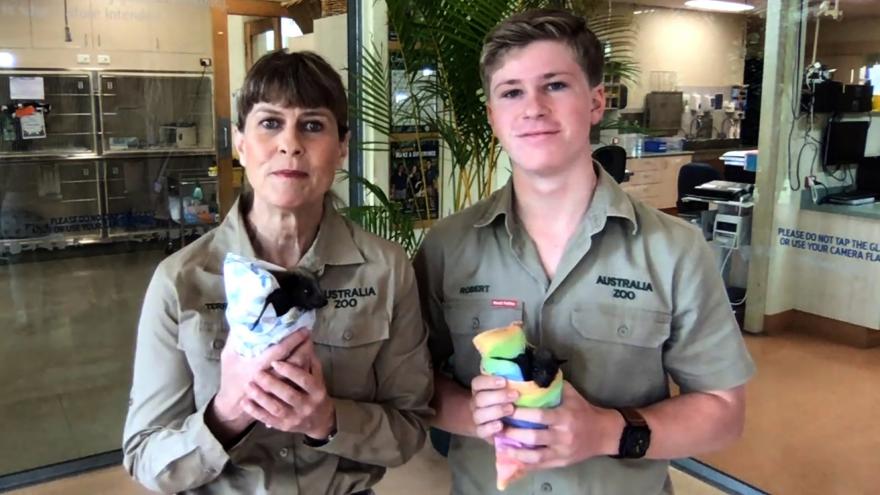 (CNN) -- The Irwin family is continuing the Crocodile Hunter's legacy of rescuing and saving wildlife in danger.

Terri and Robert Irwin, Steve Irwin's widow and son, spoke with "Anderson Cooper Full Circle" on Monday about the impact Australia's devastating wildfires are having on the nation's vulnerable animals.

"It's so devastating and heartbreaking for us to see that all across the country, vital habitats and so many animals from koalas to kangaroos to fruit bats have been displaced," Robert Irwin said.

"Now as they try to escape the flames, we're seeing not only burn injuries, but also animals coming onto roads, being hit by cars, attacked by dogs, so it really is a tough situation and it's going to be something that's going to take years to recover from."

While the Australia Zoo, which is owned and operated by the Irwin family, and their conservation properties are not threatened by fires, the zoo's Wildlife Hospital is seeing a sharp rise in numbers of injured animals.

The hospital has taken in around 90,000 animals over the years, Robert said, but the number has been "rising quite quickly in the last few days," Robert said.

Rescuing the animals injured in the blaze

The animals, injured and confused by the devastating fires, are "desperate" to escape the flames, Terri Irwin said.

"The problem with koalas is they instinctively go to the tops of trees," Terri said. "Eucalyptus trees have a very high oil content in the leaves, and when a hot fire hits a eucalyptus tree, they literally explode."

Almost a third of koalas in Australia's New South Wales state may have been killed in bushfires, which have been burning out of control. In Kangaroo Island in South Australia, 25,000 koalas were killed in just one fire event, according to Terri.

But the beloved fluffy marsupials are not the only animals severely threatened by the quickly moving fires.

Like koalas, the gray-headed flying fox is another vulnerable species. The animals, which are native to Australia, escaped from earlier fires and droughts in Queensland to to New South Wales, where they are now once again threatened by fire.

While the zoo's hospital specializes in koalas, it rescues and treats all kinds of animals including various bird species and bats.

"It's definitely working overtime for our vets and nurses to try and treat everyone that comes in here," Robert said.

And unless the fires are put out soon, Terri said the "hundreds of animals that we are seeing come in are going to rapidly turn into thousands."

Protecting animals are a crucial part of saving the environment from further climate change.

Animals such as fruit bats, which are the world's farthest-flying pollinators, are integral members of the ecosystem, according to Terri. "Without them, we've got a lot of problems," she said.

While wildlife hospitals running on tight budgets are struggling to handle the influx of injured animals, the effects of Australia's fires will impact these animals long after their recovery.

Once animals are treated, they cannot be released unless there is a safe and viable habitat for them to return to.

"Vast tracks of land, some are saying up to 15 million acres, have been destroyed so far. And with months ahead of fires, it's very sobering,' Terri told Cooper.

In the state of Queensland, where the Irwin family's wildlife hospital is located, there are 500,000 acres of habitat which have not been damaged by the fires, she said.

So far, the weeklong state of emergency continues in New South Wales, as residents seek refuge from deadly bushfires.

Three fires combined Saturday to form a single blaze bigger than the New York borough of Manhattan, as Australian firefighters battled what has been predicted to be the most catastrophic day yet in an already devastating bushfire season.

At least 24 people have died in Australia's fires and in New South Wales alone, more than 1,300 houses have been destroyed.

"It is a battle for our ecosystem right now, and I think last year, 2019, was a year where we really saw a lot of things tip, whether it's glaciers melting, the fires in the Amazon, now it's hitting Australia," Terri said. "Forevermore, we're now in a position where we're going to have to be more active to protect our environment."