The judge in Kyle Rittenhouse's trial is considering lesser charges. Here's what that means 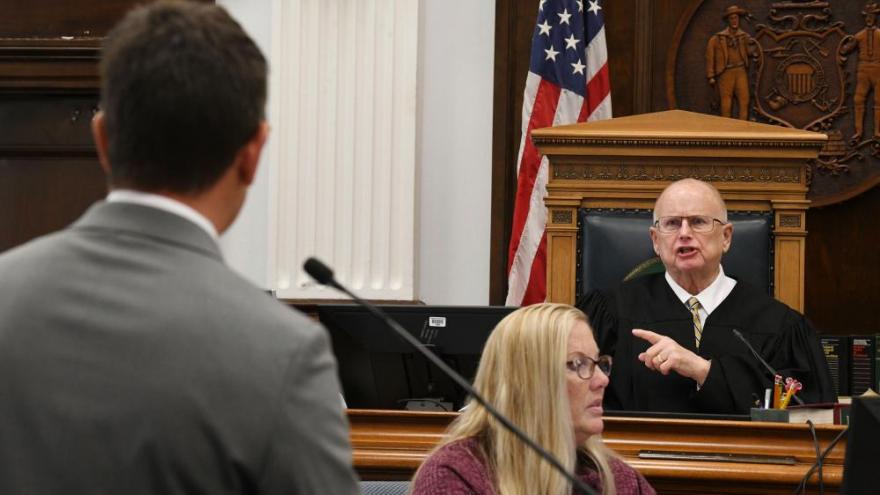 The judge in the homicide trial of Kyle Rittenhouse met with attorneys Friday morning for a conference on jury instructions, telling Rittenhouse that presenting lesser offenses to the jury lowers the possibility of a second trial but increases the risk of a conviction.

(CNN) -- The judge in the homicide trial of Kyle Rittenhouse met with attorneys Friday morning for a conference on jury instructions, telling Rittenhouse that presenting lesser offenses to the jury lowers the possibility of a second trial but increases the risk of a conviction.

The judge explained to Rittenhouse what that meant.

"Any of the ones we talked about, which are less serious crimes carrying lesser potential sentences, if I allow those, then the jury, if they are unable to agree that you're guilty of the charged offense, will have the opportunity to consider whether you're guilty of the less serious offense and could return that as a verdict as an alternative to instead returning a verdict of not guilty," Schroeder said.

Throughout Friday's conference, Schroeder indicated his position on including instructions for several of the lesser charges and told the attorneys he will give them his decision Saturday.

Testimony in the trial of Rittenhouse -- who on August 25, 2020, shot and killed two men and wounded another during violent protests in Kenosha, Wisconsin -- concluded Thursday.

If Rittenhouse is convicted of the most serious charge against him, he faces a mandatory sentence of life in prison.

Closing arguments will be given for up to five hours on Monday and the jury of eight men and 10 women will be narrowed to 12 by a drawing of names, according to the judge.

The case is being watched across a divided nation, with some seeing Rittenhouse as an armed vigilante who should to go to prison and others saying he acted in self-defense while he was there to help provide first aid and protect people's property.

"I didn't do anything wrong. I defended myself," Rittenhouse said during testimony Wednesday.

Rittenhouse attorney says he is in therapy for PTSD

The judge explained that if the prosecution isn't able to establish Rittenhouse's guilt on the charged offense beyond a reasonable doubt, then the jury must acquit him.

"The charges against you which are stated in the amended information counts one through six, the district attorney has to prove each of them beyond a reasonable doubt in order to obtain a conviction on that particular account, and there's something called lesser included offenses, and I'm sure your lawyers have discussed it with you, but I want to make sure that you understand it," Schroeder said.

Rittenhouse answered the judge's questions making sure he understood that he could overrule his attorneys on the lesser charges, but he paused when Schroeder asked him whether he has ever been treated for an emotional or mental disorder.

The judge rephrased his question.

"Well, let me ask you this," the judge said. "The more important question is, is there any reason for me to be concerned that you have some kind of disability, mental or emotional, that would prevent you from being fully aware of what your options are and making a rational decision. Any reason I should be concerned about that?"

"No, your honor," Rittenhouse replied.

Defense attorney Mark Richards jumped in shortly after and said, "his pause is -- was -- I believe, because he is in therapy, I don't think he has a mental illness or anything."

Richards continued, "As a result of this incident, he has PTSD."

The judge said he was satisfied with the answer and accepted Rittenhouse's decision to accept the lesser charges in the jury instructions.

About 500 Wisconsin National Guard soldiers are on standby and prepared to deploy to Kenosha for the verdict in order to support local law enforcement and first responders, Wisconsin Gov. Tony Evers said Friday.

The judge indicated that he would allow the jury to consider lesser charges in the shooting death of Huber. Rittenhouse is charged with first-degree intentional homicide, use of a dangerous weapon, for Huber's death.

Defense attorneys objected to the jury potentially being given instructions for second-degree reckless homicide. The judge said that he "embraced" the defense's argument.

Prosecutors also requested that the jury be given instruction on provocation, after arguing that Rittenhouse provoked Rosenbaum by raising his gun and pointing it at somebody, which led to Rosenbaum running after him.

After hearing lengthy arguments from both sides, Schroeder said he will submit the case to the jury with the provocation instruction.

The judge denied the request and the jury will only be allowed to consider the original charge.

Rittenhouse is charged with first-degree recklessly endangering safety, use of a dangerous weapon, for endangering the safety of Richard McGinnis.

The state asked that the jury also be given instruction in second-degree recklessly endangering safety.

Schroeder said that he wanted more time to consider the request, but indicated he was in favor of giving the additional instruction for the lesser charge.

Rittenhouse is charged with attempted first-degree intentional homicide, use of a dangerous weapon, for the attempted cause of death of Grosskreutz.

Rittenhouse is charged with attempted first-degree recklessly endangering safety, use of a dangerous weapon, for endangering the safety of an unknown man, often referred to as "jump kick man" in court.

Prosecutors asked that the jury also be given instructions to consider charges for second-degree recklessly endangering safety but the judge denied the request.