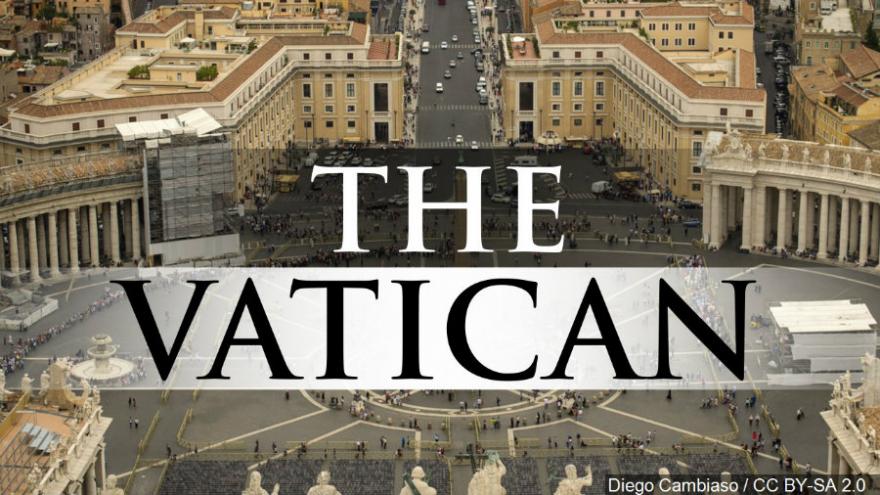 VATICAN CITY (AP) — The Latest on the Vatican's conference on dealing with sex abuse by priests (all times local):

A Colombian cardinal has warned fellow Roman Catholic bishops at a Vatican summit they could be imprisoned for covering up crimes if they don't properly deal with clergy sex abuse cases.

Salazar, the archbishop of Bogota, also blasted the confidentiality agreements often attached to Catholic Church financial settlements with victims as an attempt to "buy their silence."

Salazar proposed an obligatory code of conduct that outlines clear norms and penalties when bishops fall short in their handling of sexual abuse, an astonishing proposal from a cardinal of a country where the scandal hasn't erupted in full.

U.S. bishops proposed a similar code of conduct after their credibility was undermined by the scandal last year.

A Polish survivor of clergy sex abuse says a meeting with Pope Francis and the kiss the pontiff planted on his hand shows Francis' good will in addressing the problem of priests molesting children.

Have No Fear foundation founder Marek Lisinski told Poland's TVN24 channel he could see "true sadness and concern" and even tears in the pope's eyes during Francis' meeting with Polish activists on Wednesday.

Lisinski says abuse survivors in Poland are still waiting for redress from the Roman Catholic Church.

But he says the Vatican meeting and Francis' unexpected kissing of his hand was a "great, great thing in my life in which I place great hope."

Pope Francis has issued 21 proposals to stem the clergy sex abuse around the world, calling for specific protocols to handle accusations against bishops and for lay experts to be involved in abuse investigations.

Francis distributed the list on Thursday as he opened his high-stakes abuse prevention summit at the Vatican. The four-day event brings together some 190 bishops and religious superiors for tutorials on preventing abuse and protecting children.

The aim is to show pedophile priests a global problem and therefore require a global response.

Another idea suggests a basic handbook showing bishops how to investigate cases.

An Italian victim of clergy sexual abuse says his country should renegotiate a 90-year-old treaty with the Vatican that he says lets offending priests off the hook.

Francesco Zanardi, who heads an Italian survivors' group, told reporters in Parliament on Thursday that unlike in countries such as France, bishops in Italy are not obliged to report cases of abuse to authorities because of a "legislative gap."

Zanardi said part of the problem stems from the privileges granted to the Catholic Church in Italy in the 1929 Lateran Pact. He called for a revision of the treaty, which was signed by fascist dictator Benito Mussolini.

Earlier this month the U.N. Committee on the Rights of the Child criticized Italy for its failure to properly police the Catholic Church and called for an independent inquiry into what it said was the abnormally low number of investigations into child sex abuse committed by Catholic priests in Italy.

Catholic Church leaders attending a landmark Vatican summit on preventing clergy sex abuse have heard videotaped testimony from victims of the trauma of their abuse and the cruel indifference shown to them by bishops and religious superiors.

One woman from Africa told the summit that the priest who began raping her at age 15 forced her to have three abortions, and beat her when she refused him sex.

A survivor from Chile told the bishops and religious superiors they had inflicted even more pain on victims by discrediting them and protecting the priests who abused.

The Vatican's leading sex crimes investigator has told bishops they must protect their flocks at all cost from sexually abusive priests, telling them they must investigate sex abuse crimes and prevent pedophiles from entering the priesthood.

Archbishop Charles Scicluna repeatedly cited Pope Benedict XVI in giving a point-by-point tutorial on preventing abuse at a summit of church leaders Thursday. Pope Francis called them to the Vatican to respond to the global sex abuse and cover-up crisis that has undermined credibility in the church.

Scicluna told the bishops that the people of God "should come to know us as friends of their safety and that of their children." He vowed: "We will protect them at all costs. We will lay down our lives for the flocks entrusted to us."

A leading Filipino cardinal has told his brother bishops at the start of a historic sex abuse summit at the Vatican that each of them must take personal responsibility to heal the wounds caused by the scandal in their communities.

Manila Cardinal Luis Tagle choked up several times as he delivered the keynote speech Thursday to the unprecedented gathering of bishops and religious superiors summoned to the Vatican for a four-day tutorial.

He told them the wounds the clergy abuse scandal had caused among the faithful recalled the wounds of Christ on the cross. He demanded church leaders no longer run in fear or turn a blind eye to the harm caused by abuses and their cover-ups.

He said: "Faith that would like to close its eyes to peoples' suffering is just an illusion."

Pope Francis has warned bishops and religious superiors summoned to a landmark sex abuse prevention summit that the Catholic faithful around the world are demanding more than just condemnation of the crimes but concrete action to put an end to the scandal.

Francis opened the summit Thursday by praying for help turning "this evil into a chance for understanding and purification."

He told the gathering of 190 leaders of bishops' conferences and religious orders that they bore the responsibility to "listen to the cry of the young who want justice."

Francis called the summit after botching a well-known sex abuse cover-up case in Chile last year. Realizing he had erred, he has vowed to chart a new course and is bringing the rest of the church leadership along with him.

Pope Francis has opened a high-level summit of church leaders on preventing clergy sex abuse, hoping to impress on bishops from around the world that the problem is global and requires a global response.

The four-day meeting at the Vatican began early Thursday with prayers and was to feature speeches, tutorials and workshops on protecting children, preventing abuse and stopping cover-ups.

More than 30 years after the scandal first erupted in Ireland and Australia and 20 years after it hit the U.S., bishops and other Catholic superiors in many parts of Europe, Latin America, Africa and Asia either deny that clergy sex abuse exists or downplay the problem.

Francis has made the same mistakes. He finally did an about-face after botching a well-known sex abuse cover-up case in Chile last year.

Activists in Poland have pulled down a statue of a disgraced late priest after increasing allegations that he sexually abused minors.

They acted under cover of night early Thursday to protest the failure of the Polish Catholic Church to deal with the problem of sex abuse by priests.

Video footage shows three men attaching a rope around the statue of the late Monsignor Henryk Jankowski in the northern city of Gdansk and then pulling it down. Jankowski was a prominent priest in the Solidarity pro-democracy movement in the 1980s who died in 2010.

The private broadcaster TVN24 reported the three were arrested.

Their action comes as Pope Francis gathers church leaders from around the world at the Vatican to grapple with the sex abuse crisis in the church.