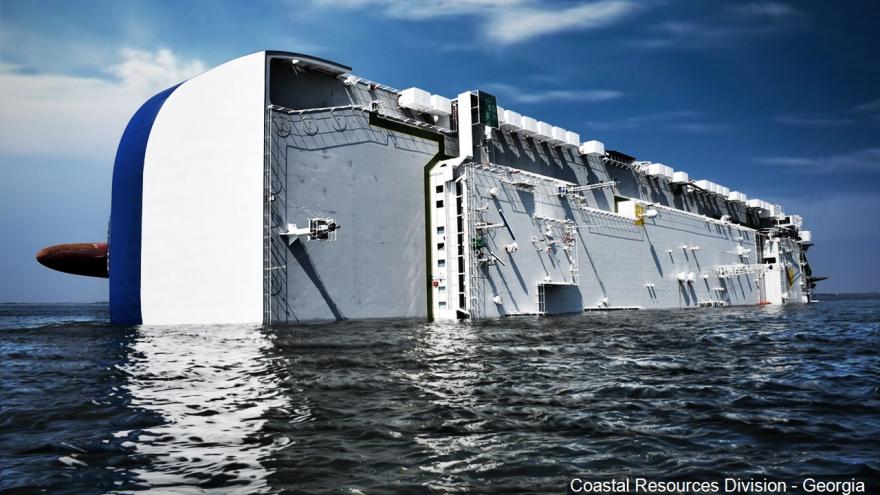 JEKYLL ISLAND, Ga. (AP) — The Latest on The Latest on an overturned cargo ship off the coast of Georgia (all times local): 4:30 p.m.

A Coast Guard officer says it could take "weeks, if not months" to remove a cargo ship that overturned while heading to sea from a port on the Georgia coast.

Coast Guard Cmdr. Norm Witt told news reporters Tuesday that marine salvage experts are working on a plan to remove the 656-foot (200 meter) long Golden Ray from St. Simons Sound near the Port of Brunswick. Asked how that would be done, he said: "We don't have all the answers right now."

Meanwhile, Witt says the Coast Guard is trying to reopen the port to limited commercial traffic by Thursday — though he called that timeline "aggressive."

He also said some oil sheen has been spotted but "right now it's limited in scope."

The Golden Ray capsized in the sound early Sunday while carrying more than 4,000 vehicles. The cause isn't known. All 24 people aboard the cargo ship were rescued.

The head of a company whose salvage workers rescued four crew members from a capsized ship off the Georgia coast says the men survived "hellish conditions" perched on pipes and plumbing above deep water in pitch darkness and oven-like temperatures.

Tim Ferris of the salvage firm Defiant Marine told The Associated Press on Tuesday the South Korean sailors "were being cooked" in the engine room of the overturned cargo ship Golden Ray with temperatures reaching 150 degrees (65.5 Celsius). He said rescuers had to stuff their own pockets with bags of ice to withstand the heat.

Ferris says the most daunting rescue was a crewman trapped in a control room with the door underwater. He was behind blast-proof glass designed to withstand an explosion. Rescuers had to use a diamond-tipped cutter to create an opening.

Ferris called it "a rescue of a lifetime."

One of the rescue coordinators who helped save four crew members from an overturned ship off the Georgia coast says the men are "doing well" after being trapped aboard the ship for more than a day.

Salvage expert Sylvia Tervoort was part of a private team that assisted the Coast Guard in the rescues Monday of the South Korean crew members still aboard the Golden Ray. She told ABC's "Good Morning America" on Tuesday: "They were really exhausted when they came out."

Tervoort said the men waited roughly 30 hours for rescue in tough conditions — in the dark, breathing air filled with fumes in the ship's engine room, in sweltering temperatures of nearly 150 degrees (65.5 Celsius).

The Golden Ray rolled onto its side early Sunday after leaving the Port of Brunswick loaded with more than 4,000 vehicles. Coast Guard Petty Officer 1st Class Luke Clayton says removing the ship will likely take weeks. The port remains closed.

Now that four crewmembers trapped inside a cargo ship capsized off Georgia's coast have been pulled to safety, the U.S. Coast Guard says it's focused on safely removing the massive vessel while protecting the environment.

Coast Guard rescuers pulled the four South Korean crew members from the Golden Ray on Monday after drilling through the hull's steel plates. All four were described as alert and in relatively good condition.

The rescues followed nearly 36 hours of work after the Golden Ray rolled onto its side early Sunday while leaving the Port of Brunswick with more than 4,000 vehicles.

Altamaha Riverkeeper, a group that works to protect water in the area from pollution, posted on Facebook that it will keep monitoring the salvage operations.