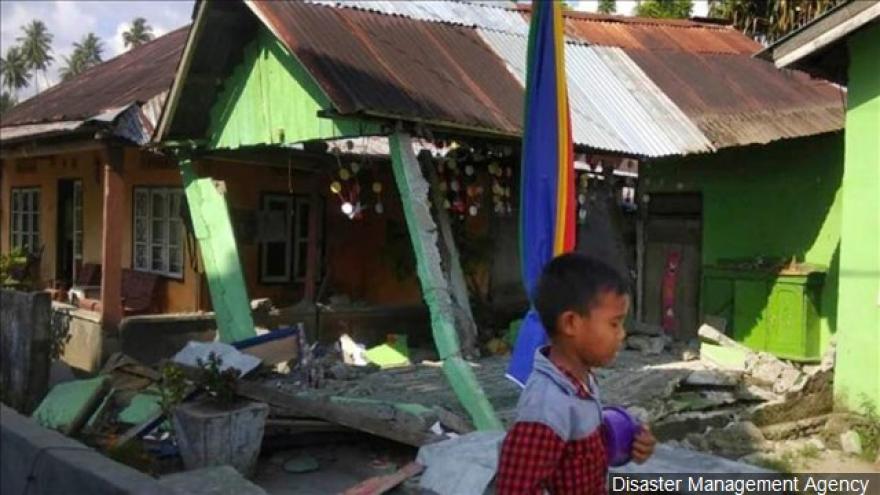 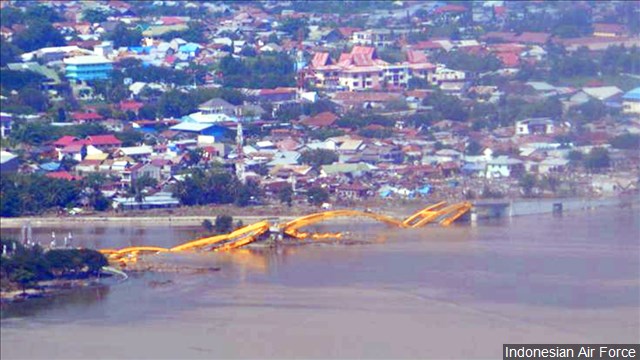 PALU, Indonesia (AP) — The Latest on a powerful earthquake and tsunami that hit part of central Indonesia (all times local):

Indonesia's disaster agency says the death toll from the massive earthquake and tsunami that hit the island of Sulawesi has increased slightly to 844, and nearly 50,000 people have been displaced by the disaster.

Most of the dead were from the city of Palu, but much is still unknown about other coastal towns that have yet to be properly assessed due to impassable roads, downed power lines and phone outages. Spokesman Sutopo Purwo Nugroho said the death toll increased Monday by 12 from a day earlier.

The 7.5 magnitude quake hit at dusk Friday, creating a tsunami that swept waves ashore reaching as high as 6 meters (20 feet) in some places. Many buildings collapsed and rescuers were still working to free desperate survivors. A mass burial was being held.

Thousands of desperate people, mostly women and children, have swarmed the airport in the Indonesian city of Palu in a failed bid to push their way onto an Indonesian Air Force plane days after a powerful earthquake and tsunami devastated the city.

Video footage aired by Indonesia's TVOne showed women and children, some pregnant and others carrying babies in their arms, weeping and screaming as they pleaded with military personnel to let them board a Hercules aircraft on the tarmac Monday morning.

One woman told the network, "We have not eaten for three days. We just want to be safe."

The airport has been closed to commercial traffic since the disaster struck Friday night.

Indonesian President Joko "Jokowi" Widodo said the government was doing all it could to get in as much food and fuel as into Palu as it could.

A mass burial of people who died in last Friday's earthquake and tsunami in central Indonesia has begun.

Around midday Monday, teams of workers, their mouths covered by masks, carried 18 body bags and laid them in a trench. Mechanical earth-movers waited to push soil on top of the bodies.

More burials are expected to follow. The grave in Palu, a hard-hit city in Central Sulawesi province, was prepared for more than 300 bodies initially.

The toll of 832 is expected to rise as areas inaccessible since the disaster are reached. The quake and tsunami collapsed buildings and caused other severe damage in Palu and nearby communities.

Indonesia's president has authorized for the country to accept international help for the earthquake and tsunami disaster on the central island of Sulawesi.

It wasn't immediately clear what type of help was being authorized.

The toll of 800 dead in Friday's disaster is expected to grow as areas inaccessible since the disaster are reached. The quake and tsunami damaged airports, hospitals and other crucial infrastructure.

A mass burial was being prepared for more than 300 bodies in an Indonesian city hit hard by a powerful earthquake and tsunami.

The toll of more than 800 dead from Friday's disaster is mostly from Palu and is expected to grow as areas cut off by damage are reached.

National disaster agency chief Willem Rampangilei said the grave can be enlarged if needed and burials must be done soon for health and religious reasons. A majority of Indonesians are Muslim, and burials customarily take place within one day.

There was a desperate need for heavy equipment to reach possible survivors in collapsed buildings, including an eight-story hotel in Palu where voices were heard in the rubble. A survivor was found Sunday evening in the ruins of the Roa-Roa Hotel.