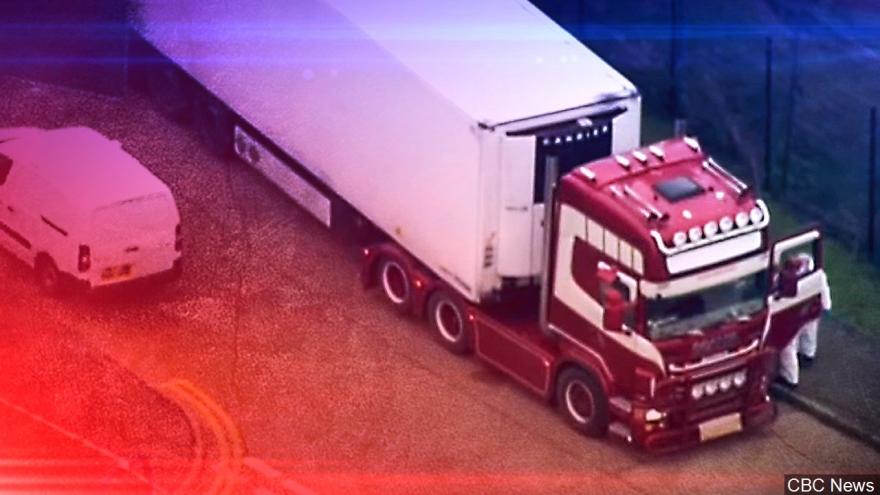 LONDON (AP) — The Latest on the deaths of 39 people in a truck in England (all times local):

UK police have charged a truck driver with 39 counts of manslaughter and conspiracy to traffic people in connection with 39 deaths in the back of the truck he was driving in southeastern England.

Police say Maurice Robinson, 25, of Craigavon, Northern Ireland is due to appear at Chelmsford Magistrates Court on Monday. He was the first of those arrested to be charged in what is seen as one of the U.K.'s biggest cases of people smuggling.

Four others have been arrested in the case. U.K. police are struggling to identify the victims, who are believed to have come from Asia, and autopsies are being performed. The Vietnamese Embassy in London has set up a hotline for families to call about missing family members.

Police in Ireland say they've arrested a man in his early 20s who was being sought by authorities in connection with the deaths of 39 people found in a truck in southeastern England.

Irish police say Saturday the man from Northern Ireland was being sought by Essex Police as part of the investigation into the tractor-trailer deaths, one of Britain's deadliest people-smuggling cases ever. He was arrested at Dublin's port.

The arrest brings to five the number of people arrested in the case, including the 25-year-old driver of the truck, who is also from Northern Ireland.

The Vietnamese Embassy in London has started a hotline to help families seeking information on loved ones following the deaths of 39 people believed to be victims of human smuggling who were found in the back of a truck in southeastern England.

U.K. police say they've been in contact with Vietnamese authorities, even though they are not yet certain of the identities of those found dead Wednesday in the refrigerated truck. The Vietnamese government has also announced its own investigation into the deaths.

Those seeking assistance in relation to the case can also contact Vietnam's general citizen protection hotline at +84981 8484 84.

UK police in Essex say all of the 39 victims found dead in a truck container in southeastern England are now out of the truck and in a mortuary awaiting autopsies.

But Detective Chief Inspector Martin Pasmore says the victims have not been identified and very few documents were found with the bodies. He met Saturday with the Vietnamese ambassador amid reports on social media that many of the victims were from that southeast Asian country.

Pasmore again appealed to those who might have information on the victims to help with inquiries.

Four people have been arrested so far in the case, one of Britain's deadliest smuggling disasters.

Vietnamese families are mourning lost children and desperately seeking information about the 39 people who died in the back of a sealed truck in southeastern England this week, even as British officials struggle to identify victims whose identities were obscured by the people smugglers who led them to their deaths.

Police in Britain are questioning four people in connection with the tragedy as they grappled with one of the deadliest cases of trafficking ever reported in the country. In an effort to treat the victims with respect and preserve evidence, authorities are slowly transferring the bodies from the truck to a hospital mortuary where the process of identification will take place.

But the task is likely to be difficult. People smugglers normally take the passports of their passengers to obscure their identities, stripping them of their names and giving them new documents when they arrive at their destinations.

Police initially believed the victims were Chinese but later acknowledged that the details were still evolving. Attention shifted to Vietnam after the family of a 26-year-old Vietnamese woman released text messages suggesting she had suffocated in the truck.