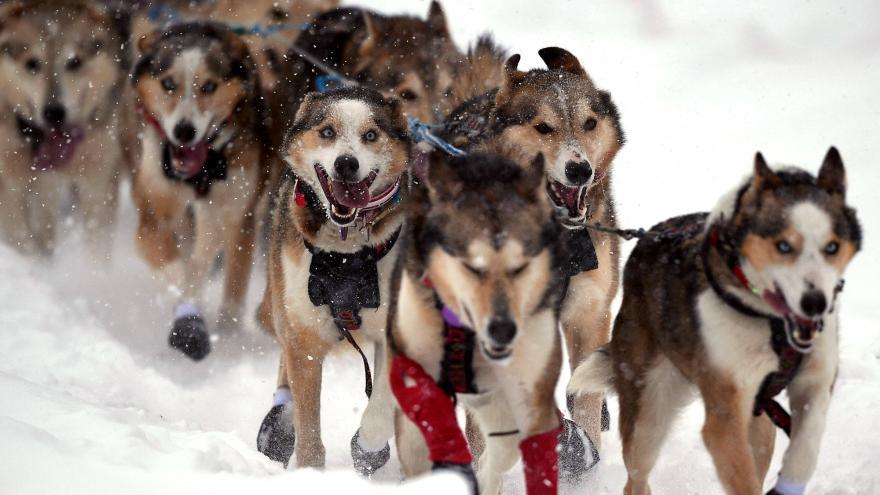 (CNN) -- The Iditarod, Alaska's legendary long-distance sled dog race, is set to begin Sunday despite the threat of coronavirus.

The route, usually almost 1,000 miles, has been modified to avoid most communities and will be roughly 100 miles shorter than usual.

A reduced number of 47 mushers include 13 women and 12 rookies. They will line up in Willow, about 75 miles outside of Anchorage, before hitting a new out-and-back trail. The race usually ends in Nome.

"It's not like we are very social people," Ulsom, one of this year's favorites, told Reuters. "We spend most of our time out with the dogs."

'Next year, we're going to have the biggest bash'

Rod Urbach, the Iditarod's chief executive, says all participants, including the staff and volunteers, will take Covid-19 tests and operate within an Iditarod bubble.

Dubbed the "Last Great Race" by organizers, the Iditarod usually draws crowds at the ceremonial start line in Anchorage. But fans are encouraged to watch the live stream from home instead.

The ceremonial Mushers' Banquet has been scrapped, but organizers hope to make up for lost time at the 50th-anniversary race in 2022.

"Next year, we're going to have the biggest bash in Anchorage imaginable," Urbach told Reuters.

Veteran musher Thomas Waerner won last year and was stranded in Alaska for months after the race. Canceled flights and travel restrictions in the early days of the pandemic prevented him from returning home.

He eventually flew on an historic aircraft destined for a Norwegian museum, with his dogs for company.

"Winning the race and then going back on the plane [...] I think this was one of the cool things that happen in life," Waerner told CNN Sport.