The little-known history of the Black 'Concrete Cowboy' 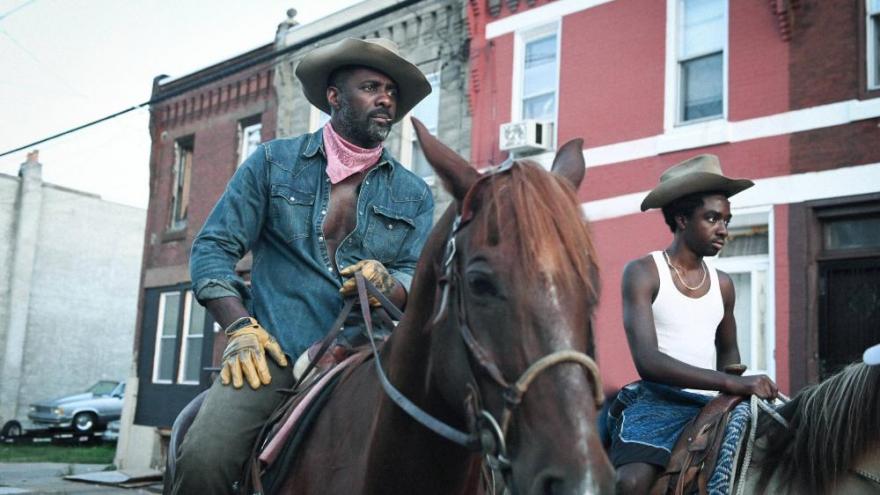 (CNN) -- In Philadelphia, a Black cowboy in a white undershirt and a gold chain wrangles a wayward horse. Teens pile hay and clean up manure near brick row houses. Men and women ride cantering horses down a city street as cars pass by.

These are scenes from "Concrete Cowboy," a new Netflix movie starring Idris Elba and Caleb McLaughlin. But they're also the reality in parts of north Philly, where the movie was filmed and a subculture of urban Black cowboys has existed for more than a century.

"It's a real community that exists right now and has been part of Philadelphia ... and other urban cities around America for over 100 years," Elba said on the "Today" show earlier this month. "These communities had these beautiful animals as part of their lifeblood. And when the motorcars came, the Black folk kept the horses as part of the fabric of their communities."

The movie follows the story of a troubled teen sent by his mother to spend a summer with his estranged father, played by Elba, and his fellow horsemen in Philadelphia. The community embraces the youth and gives him positive role models and a sense of purpose. It's based on a novel, "Ghetto Cowboy" by Gregory Neri, and inspired by the Fletcher Street riders -- a real-life group that stables and rides horses in the neighborhood.

There's a long but little-known history of Black cowboys in the American West. It's a tradition that lives on today in many inner cities across the US, where teens build character -- and stay out of trouble -- by learning horsemanship.

Fletcher Street is populated by stables and Black equestrians who've cared for horses and provided lessons to neighborhood children for a century.

One real-life rider, Jamil Prattis, plays Cole's mentor in the movie and is a fixture on Fletcher Street. He started riding nearly a decade ago after he followed a group of cowboys on horseback to the stables.

One of the more prominent clubs is the Fletcher Street Urban Riding Club. It was founded by Ellis Ferrell, 82, who began riding horses on the streets of Philadelphia as a boy in the late 1940s. He moved to Fletcher Street in 2004 to provide free, after-school equestrian activities for local youth.

Of the roughly 30 horses housed in several stables along Fletcher Street, his club owns nine.

Once they've done their homework, neighborhood kids head to the stables, where Ferrell finds chores for them to do, leaving them little time to loiter in the streets. He believes the work helps them build character and self-esteem.

"At the stables, the children clean the stalls, brush the horses and bathe them, and then they get a chance to ride them," he said. "We have a little spotlight area across the street (where) they can go and ride. Sometimes they help pick up the hay and unload."

He runs the club with his son, Darrin Ellis Ferrell Jr., 55. Together they make sure their young volunteers have done their schoolwork, have proper riding gear and warm coats to wear in the winter. Some weekends, they hold cookouts and serve hot dogs.

One of the club's young riders, Hakeem Greer-Gilliam, spends his weekends taking care of his favorite horses, Tiptoe and Babbles.

"I clean them and ride them around the block," said Hakeem, who is 11. "It gets me out of the house and away from video games. It teaches me responsibilities and how to take care of horses."

In real life and in the movie, the Fletcher Street riders huddle around an outdoor fire on cold nights and swap stories.

Elllis Ferrell said those scenes are his favorite part of the movie because they're a true reflection of what happens on Fletcher Street. "We sit around and have a good time," he said.

The former truck driver is also an Army veteran. He said he runs the stables with the help of donations from well wishers.

It's been all worth it, he said. Some of the children he's worked with have gone on to become teachers or jockeys.

Black cowboys were a staple of the American West

Historians estimate that 25% of cowboys on the American frontier of the late 19th century were Black. Many were former slaves who had learned horsemanship skills on ranches across Texas and other parts of the West.

But you wouldn't know it from reading most textbooks or watching early Hollywood Westerns, where sheriffs, outlaws and other gunslinging cowboys were almost all White. In the past half century studios began populating Westerns with Black actors, including Sidney Poitier in "Buck and the Preacher," Danny Glover in "Silverado," Morgan Freeman in "Unforgiven" and Denzel Washington in the remake of "The Magnificent Seven."

In cities like Philadelphia, urban cowboys (and cowgirls) recall a bygone era in which horse-drawn wagons delivered vegetables, coal and other goods.

"This existed in all American cities. They are part of an ancient culture of horsemen," said Eleise Clark-Gunnells, a researcher at the Black American West Museum & Heritage Center in Denver.

"The horse culture in America is alive," she added. "Before Covid, trail rides and rodeos still happened almost every weekend across America."

Clark-Gunnells, a horsewoman herself, said there are numerous organizations and trail-riding groups across the country that help preserve the culture of Black equestrians.

"They are a living testament to a rich history," she said. "When children of color see us ride -- heck, when people see us ride, some are surprised, others are filled with pride."

But in many cities, gentrification is pushing out stables and threatening the cowboy way of life, she said -- an issue explored in the movie.

"Riding land now is filled with condos," Clark-Gunnells said. "There is a struggle to hold on to open land for horses."

This group in Los Angeles is reclaiming Black equestrian culture

In the historically Black Los Angeles suburb of Compton, a group of horsemen is working to ensure the history of urban Black cowboys is not erased.

They're called the Compton Cowboys, and they started with nine friends who've known one another since childhood. The group's main goal is to preserve the Black cowboy subculture by training the next generation of riders.

"We decided to move the culture forward by paying homage to the Black cowboy culture that has been lost over the years," said Randy Hook, a musician and one of the group's founders. "Our goal is to reclaim a lot of that history, tradition and culture."

The founders all grew up in Compton, and believe that horses saved them from a violent life on the streets. They operate a ranch with 12 horses, and teach the young riders the value of taking care of a living thing.

They also incorporate equestrian events in after-school programs and field trips, and teach kids how to ride and care for horses. To do that, they sell merchandise and rely on donations for items such as bridles and reins.

"We want them to have a sense of value for the environment and things that live and breathe," Hook said. "Horses are magical, they just make you feel good."

One unexpected benefit of Black men riding horses in Compton has been little racial profiling by police officers, Hook said. When riding their horses they rarely get stopped, he said -- unlike when they're driving their cars.

The Compton Cowboys, Fletcher Street cowboys and other Black urban riders also take part in peace marches, voting drives and other community events. They're hoping that "Concrete Cowboy" will shine a light on their efforts to preserve their culture and encourage more youth to ride.

And when young kids see Black riders navigating the streets on horseback, it'll may make them believe they can do it, too.