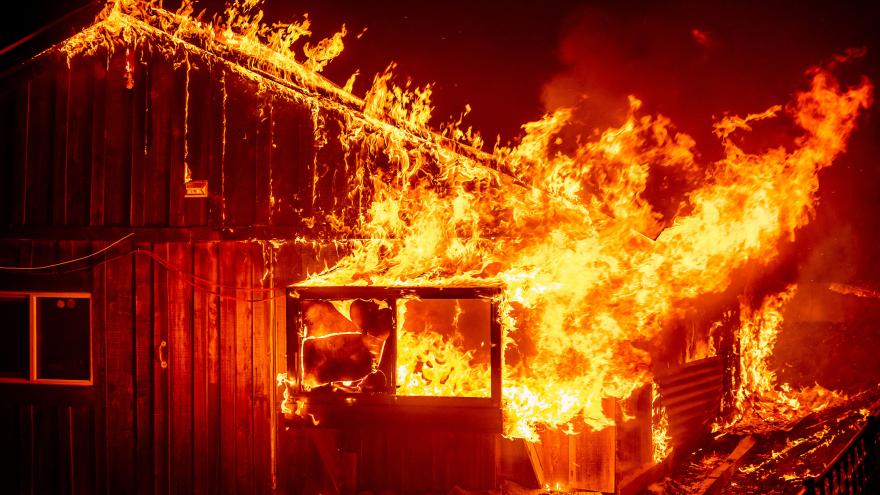 (CNN) -- Firefighters across the US West Coast are battling unforgiving infernos that have already killed seven people, charred hundreds of homes and neighborhoods and painted the sky an eerie orange.

Wildfires leaving behind nothing but ash have devastated communities across California, Washington state and Oregon.

In northwest Oregon, two people were killed as a result of the wildfires in Marion County.

"We also fear that this is not going to be the only folks we'll find deceased up there," Marion County Sheriff Joe Kast said Tuesday.

Parts of the county are still under a state of emergency as a fire that started last month continues to grow, now having ravaged more than 130,000 acres. The state's governor said the human lives and properties lost by the wildfires could be the most in Oregon's history, adding several towns across the state are destroyed.

In Jackson County, Sheriff Nathan Sickler said one body had been recovered near where the Almeda Fire started. The sheriff said there could be more deaths, as many county residents refused to evacuate.

In Washington state's Cold Springs Fire, a child died from the flames, state Commissioner of Public Lands Hilary Franz said. Two of the child's relatives are both in intensive care in a Seattle hospital suffering from burns, according to a hospital spokeswoman.

And in California, which has seen more than 2.5 million acres destroyed by fires, police are working to recover the remains of three people who died in the racing North Complex Fire.

Live updates on the wildfires

Hundreds could be out of their homes for weeks

California fire officials say that while firefighters get closer to containing some of the blazes, several new fires ignited Wednesday and are being fanned by strong winds. More than 14,000 firefighters are battling nearly 30 fires in the state, Cal Fire said.

The Creek Fire, that has destroyed about 360 structures in Central California, has now grown to more than 166,000 acres and remains 0% contained, fire officials said.

Authorities say they'll now be using new technology aboard their aircrafts to help them look for people who may still be out in the mountains and safely escort them out, Fresno County Sheriff's Deputy Lieutenant Brandon Pursell announced Wednesday. There have already been hundreds of rescues from the flames. About 385 people and 27 animals were airlifted by helicopter in the past several days after getting trapped by the fire in the Sierra National Forest, Col. David Hall told CNN.

At least 30,000 people have been evacuated due to the fire. But the repopulation process is likely to be a long one, Pursell said.

"It's going to be probably a couple weeks, just be patient with us," Pursell said.

Fire officials issued evacuation orders and warnings across several parts of the state including in Southern California, where the El Dorado Fire continues to burn parts of San Bernardino County and is 18% contained. In San Diego County, the Valley Fire -- which has burned more than 17,000 acres -- also prompted several evacuation orders and warnings.

On Wednesday, all 18 national forests in the state were ordered closed due to the "explosive growth" of wildfires, a notice from forest service officials said. Those temporary closures encompass more than 20 million acres of land.

"The number of large fires and extreme fire behavior we are seeing across the State is historic," said Regional Forester Randy Moore. "I ask all Californians and visitors to take these closures and evacuations seriously for their own safety."

Nancy Hamilton says driving through the Berry Creek area in Northern California, where the North Complex Fire has scorched more than 250,000 acres, was downright terrifying.

The Butte County resident said she decided to drive to the area Wednesday to get a closer look at the destruction.

"It was a beast, the thing is a beast," she added.

Hamilton says she's currently housing several families who were forced to evacuate their homes, including her best friend's 80-year-old grandmother whose home was swallowed by the flames.

"They're pretty devastated," Hamilton said. "She just lost everything."

"I was able to take photos for her so at least she knows that it was gone," she said. "A lot of people don't know their houses are gone and they're wondering."

Fires in Oregon have turned neighborhoods in the state to rubble.

"I don't know where my family is going to go," Denise Moyle told CNN affiliate KATU.

Moyle's home was destroyed by the Santiam Fire --- originally named the Beachie Creek Fire -- and her family was able to escape after a sudden phone call from a concerned neighbor. When they returned Wednesday morning, they sifted through the charred remains of their home and were only able to recover several small items.

"We left not thinking we weren't going to have a home, so we left without much," Moyle told the news station

Fire officials initially thought the fire would likely grow to less than 500 acres, but a "historic" windstorm Monday fanned the flames and the blaze grew to more than 131,000 acres in a night. The fire has now burned more than 158,000 acres and is 0% contained.

Gov. Kate Brown said in a Wednesday news conference more than 300,000 acres have burned across the state and for the parts that aren't yet on fire, "the worst fire conditions in three decades persist."

Near Estacada, more than 100 people are battling the Riverside Fire, which has now grown to about 112,00 acres. Clackamas County officials have called for widespread evacuations across the area and issued a countywide air quality advisory.

In Washington state, the Sumner Grade Fire burned several homes and prompted hundreds of evacuations, CNN affiliate KOMO reported. On Wednesday, it was about 20% contained, the news station reported.

"In Western Washington, the old rule of thumb used to be if it was 20% you got out of the way because you were expecting erratic fire behavior," East Pierce Fire Chief Bud Backer said, according to the station. "But with homes in the way, we didn't have that luxury."

Backer says he was there when the fire exploded Monday, the affiliate said.

"When it hit, it was like a blow torch,"

In a Twitter post, Gov. Jay Inslee said the fire chief said he hadn't seen a fire explode like this one "in his 33 years of service.