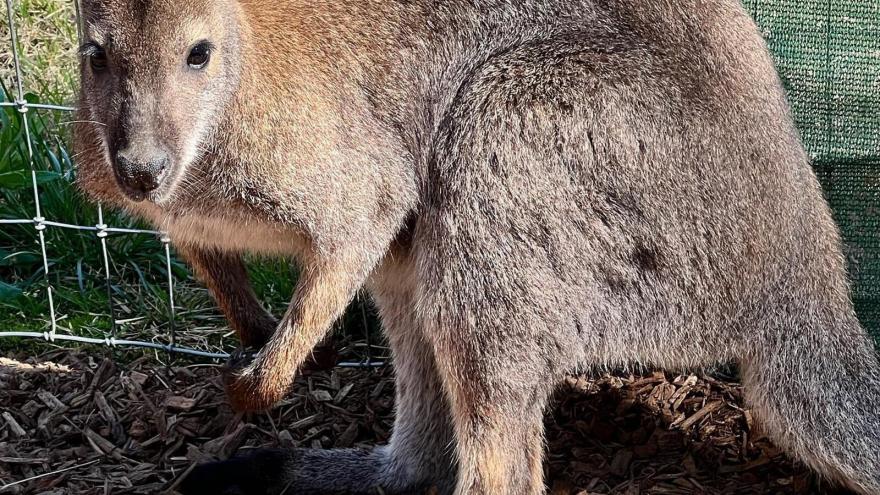 The Memphis Zoo posted this photo of a wallaby to help in the search for Honeybunch, following flash flooding.

(CNN) -- After a harrowing 36 hours or so for staff at the Memphis Zoo, Honeybunch, a wallaby that went missing in a severe storm, is back with his fellow marsupials.

Two-year-old Honeybunch was one of 23 marsupials -- including 19 kangaroos -- that were being evacuated from their enclosure Wednesday evening amid torrential rain, thunder, lightening, and a tornado warning, Memphis Zoo Executive Vice President Matt Thompson said.

The area was under a flash-flood watch, and with an "unprecedented amount" of rain coming down, zoo staff stayed late Wednesday to monitor water levels at a creek that runs around its marsupial exhibit, Thompson said.

They were evacuating the animals when water began rising suddenly in the enclosure, and by the end of the evacuation, staff members were wading through rushing water to grab the marsupials by hand.

"We pulled the animals out in the nick of time," Thompson said. Normally the animals would have been herded, but there was no time for that, he said.

A line of severe thunderstorms rolled through Memphis Wednesday afternoon, and a flash flood warning was issued in the area just after 4:30 p.m. CT and continued until 9:15 p.m., according to CNN meteorologist Monica Garrett.

The area received 2.28 inches of rain Wednesday, with 1.69 inches of it falling in just one hour, Garrett said.

But back at the animal hospital, where the kangaroos and wallabies were taken, a headcount revealed that Honeybunch was missing.

"The caretakers, the zookeepers and our educators who take care of the wallabies were heartbroken," Thompson said. "They all form bonds with these animals," which he described as a charismatic species with distinct personalities.

Zoo staff immediately started searching for the missing wallaby, and Memphis police joined in the effort, the zoo said on Facebook in a press release asking for help finding the missing marsupial.

No one called in to say they had seen him, but many people offered help.

"We had people looking through the park and calling us to let us know they were looking, so it was pretty heartwarming, honestly," Thompson said. "It was great to see the support."

Finally on Friday morning, an alert curator spotted what looked like a wallaby footprint and followed the tracks to a service area in the park.

"Sure enough, she finds the wallaby, and he seems fine," Thompson said.

Just to be on the safe side, vets are examining Honeybunch at the animal hospital, according to Thompson.

"It was an incredible ending and a great start to our day," he said.