The Minneapolis police officer had 18 previous complaints against him, police department says 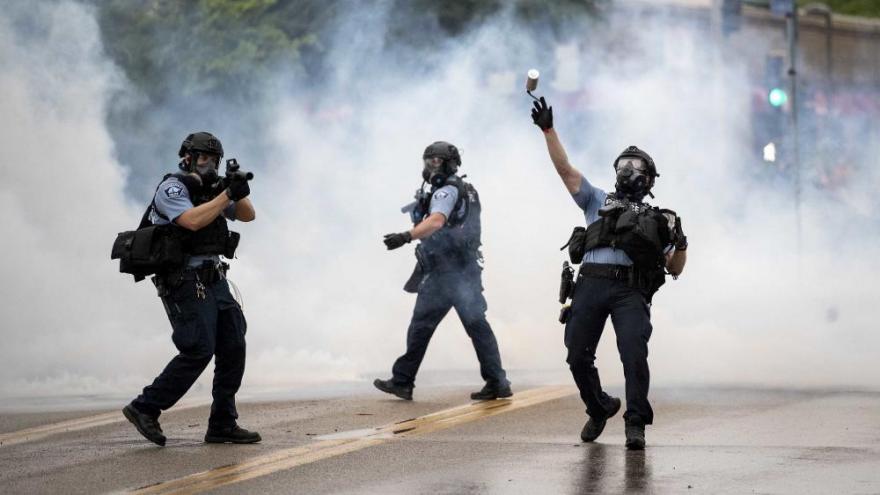 A police officer throws a tear gas canister towards protesters at the Minneapolis 3rd Police Precinct, following a rally for George Floyd on Tuesday, May 26, 2020, in Minneapolis. Four Minneapolis officers involved in the arrest of Floyd, a black man who died in police custody, were fired Tuesday, hours after a bystander's video showed an officer kneeling on the handcuffed man's neck, even after he pleaded that he could not breathe and stopped moving.

(CNN) -- The former Minneapolis police officer seen in a video with his knee on George Floyd's neck had 18 prior complaints filed against him with the Minneapolis Police Department's Internal Affairs, according to the police department.

It's unclear what the internal affairs complaints against the officer, Derek Chauvin, were for. MPD did not provide additional details.

Chauvin was arrested Friday and charged with third-degree murder and manslaughter, according to the Hennepin County Attorney's Office. Chauvin was fired earlier this week, along with three other MPD officers who were present when Chauvin knelt on Floyd's neck. Police have said they were responding to an alleged forgery at a corner store.

Floyd, a 46-year-old black man who was unarmed and handcuffed, pleaded that he could not breathe. He was soon after declared dead at a nearby hospital, according to authorities.

Floyd's death and video of the incident have sparked widespread anger, destructive protests and calls for the officers involved to face criminal charges.

Only two of the 18 complaints against Chauvin were "closed with discipline," according to a MPD internal affairs public summary. In both cases, the "discipline issued" column indicated that a letter of reprimand had been issued in response.

Chauvin was not the only officer on the scene that day with a history of complaints against him.

Former officer Tou Thao had six complaints filed with internal affairs, one of which was still open, according to the public summary released Thursday. The other five complaints had been closed without discipline.

The two other officers involved had no complaints filed against them, per MPD internal affairs.

CNN has reached out to attorneys representing the officers for comment.

One officer was the subject of a lawsuit

Thao was also part of a 2017 excessive force lawsuit that was settled by the city of Minneapolis, according to a settlement obtained by CNN and an attorney for the plaintiff in the case.

The lawsuit was brought by Lamar Ferguson, who claimed in the suit that Thao and another officer subjected him to "cruel and unusual" punishment when they arrested him in October 2014.

According to the lawsuit, the officers used "unreasonable force," including "punches, kicks and knees to the face and body while Ferguson was defenseless and handcuffed." As a result, Ferguson suffered broken teeth, bruising and trauma, the lawsuit says.

Both the city and the officers denied liability in the settlement, according to a 2017 statement from the city of Minneapolis.

According to the lawsuit, Ferguson was walking home from his grandmother's house with his pregnant girlfriend on October 7, 2014, when they were approached by a Minneapolis police car with Thao and another office inside.

The lawsuit claims the officers handcuffed Ferguson despite having no probable cause to believe he had committed a crime.

The officers took Ferguson's wallet and ID and the second officer ran the ID through the National Crime Information Center, a federal database, but no warrant showed up in the system, the lawsuit said.

Despite this, the second officer "falsely stated that there was a warrant out for Plaintiff's arrest," the lawsuit states. The officer questioned Ferguson about a previous incident involving people who the officer believed were Ferguson's family members, but Ferguson "said he had no information to tell the officers."

A physical altercation broke out, according to the lawsuit, then Thao threw Ferguson to the ground and began hitting him. Thao allegedly lifted Ferguson's head up by grabbing the back of Ferguson's hoodie as the other officer allegedly kicked him in the mouth.

Ferguson was taken to a hospital, but allegedly the officers "expressed impatience with medical staff caring" for Ferguson. When he was discharged, the officers allegedly threw his discharge papers -- including prescription painkillers -- in the garbage as they left the hospital, the lawsuit states.