The most ridiculous historical arguments denying women the right to vote 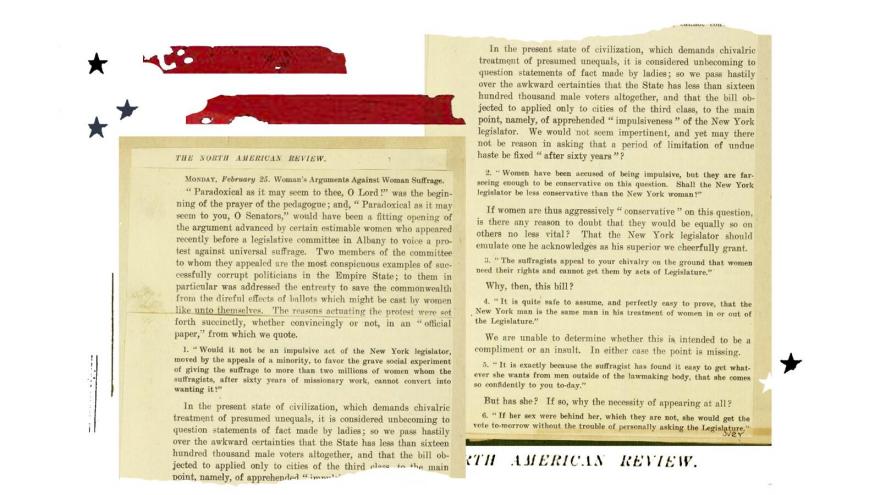 Argument: Women can get whatever they want anyway

(CNN) -- Today, women being able to vote is a given. A no-brainer. A natural, non-negotiable insurance of a Constitution designed to provide equality for all people. But before the 19th Amendment was ratified 100 years ago in 1920, ensuring all women the right to vote*, people invented all sorts of reasons why they didn't belong at the polls. (*Assuming you weren't Black or disabled.)

Women were seen as somehow too fragile and too powerful at the same time, liable to burst into hysterics or upend the entire family unit just by casting a ballot. Here are a few examples of these arguments, from the absurd to the downright depressing.

Argument: Eve ate the apple which made women unequal to men and, sorry, voting won't change that

Some of the most common arguments against a woman's right to vote centered on religion, which tied into ideas about the family unit, relationships between men and women and, as Justin D. Fulton, a pastor of the Union Temple Baptist Church in Boston, Massachusetts put it, "nature and common sense." His 1869 pamphlet, "Woman as God Made Her," not only incorporates traditional arguments from scripture, but also features this bold take:

"If we give to woman the ballot, shall the equality which woman lost, when she ate of the forbidden fruit, be restored, and shall she be made again the equal of man?"

Unsurprisingly, his conclusion is ... no.

Argument: Women don't actually want to vote, they just think it would be fun to try

Sadly, men weren't the only ones to rail against women's suffrage. There were plenty of women who insisted they didn't want the right to vote, and occasionally, the push for voting rights was dismissed by some as a fashionable cause du jour that women would simply pick up and later abandon, like a fancy hat. That viewpoint is on display in this cartoon, published by the New York Press, in which fairly common arguments for women's equality are cast as some questionable fashion choice -- as a passerby asks, "I wonder if it's really becoming?"

Argument: Women could cancel out their husbands' votes

Some anti-suffrage material mixed in political arguments with household tips to, as the Jewish Women's Archive writes, "convince ordinary women that the right to vote was unnecessary." In fact, to them it wasn't just unnecessary. It could actually blot out the power of men!

This pamphlet, published by the National Association Opposed to Woman Suffrage encourages women to vote (lol) "no" on women's suffrage because, among other things, married women can "only double or annul their husband's votes." And if that wasn't bad enough, "in some states more voting women than voting men will place the Government under petticoat rule."

That term is, of course, a derogatory reference to a government dominated by women.

More household tips! Another pamphlet from the National Association Opposed to Woman Suffrage makes the household tip-to-anti-suffrage connection even more obvious. Observe these helpful hints, any of which would make a beautiful cross-stitch sampler:

"You do not need a ballot to clean out your sink spout. A handful of potash and some boiling water is quicker and cheaper."

"Why vote for pure food laws, when your husband does that, while you can purify your ice-box with saleratus water?"

"Butter on a fresh burn takes out the sting. But what removes the sting of political defeat?"

Argument: Voting will lead women away from love and children and toward loneliness and anxiety

Enough of the "slippery slope" argument. What about the "stairs of doom" argument? This cartoon drawn by Laura E. Foster around 1912 features a roller coaster of highs and lows for a woman pursuing the vote.

At the bottom is love, marriage, children and home, which are all fine. But then things get dark, and the children are left behind as she ascends to ambition, social achievement, admiration, and then, suddenly, flattery and disappointment on her way to suffrage.

But alas, the fated journey has not yet ended. Once the vote is secured, she keeps ascending to strife, anxiety and loneliness, pausing to tear her gaze away from the laurels of fame toward the precious children she left behind about a dozen steps before.

Argument: Women can get whatever they want anyway

This excerpt features some rebuttals from suffragists against a paper titled "Woman's Arguments Against Woman Suffrage." The anti-suffragists call a woman's vote a "grave social experiment," and argue, basically, that women can already get whatever they want without the vote.

"It is exactly because the suffragist has found it easy to get whatever she wants from men outside of the lawmaking body, that she comes so confidently to you to-day," it reads.

In fact, to these anti-suffragists, it's not enough that women don't need the vote to get what they want -- voting could actually take away a woman's power!

"We believe that woman's non-partisan attitude gives her the opportunity for influence in the community which the suffrage would divert and curtail," the arguments go on.

Argument: Pregnant women could get too excited when they vote, and that will turn their babies into ugly idiots

Pregnant women and others in a delicate way, please look away lest you injure yourselves in rage. This book, written by Benjamin Vestal Hubbard around 1915 comes out swinging from the title: "Socialism, feminism, and suffragism : the Terrible Triplets."

In a section titled "Physiological Conditions Make Woman Suffrage Impractical," Hubbard (a lawyer and writer by trade), delves into the mercurial mystery of a woman's body and how ill-suited it is for the strenuous task of voting.

"Many women, at the time of holding primary elections, will be in a delicate condition, and to expose herself to excitement will jeopardize the physical and mental well-being of the child that is to be," he writes. "Better to let the government go to smash than bear a physically imperfect or idiot child."

Hubbard goes on to apply the same argument to such blasphemies as women jurors and politicians, who he claims couldn't do their jobs because they wouldn't know where to put their babies.

Finally, another cross-stitch sampler from his screed: "If you know the physical life of a woman, you know until she is 50 she has moods and tenses." What happens after 50? Who knows, but it apparently doesn't have to do with voting.

Argument: Women will abandon their husbands, cruelly leaving them alone with their own children, in order to vote

It's clear a lot of anti-suffrage arguments used a woman's role as mother to both dissuade them from voting and convince everyone else that women's suffrage would lead to a total breakdown in the family structure and destroy the next generation of Americans.

For instance, this cartoon suggests that women may actually need to leave the house to vote, which would leave her defenseless and fragile husband alone with the two small, loud strangers also known as his children.

A ballot on the lower right corner reveals the members of the "Hen Party:" Mrs. Henry Peck (get it? Henpeck) for president and Mrs. Wm. Nagg for vice president.

Argument: Women are sweet, weak and gentle and voting will make them hard and harsh like men

Many, many notable politicians were firmly on the anti-suffrage side, including Elihu Root, who served as the Secretary of State under President Theodore Roosevelt. This 1909 column from the Geneva Daily Times details Root's arguments against women's suffrage at a Capitol hearing and features text from an argument against suffrage that he made in 1894, when he was practicing as a lawyer.

"Woman rules today by the sweet and noble influence of her character. Put woman into the arena of conflict and she abandons these great weapons which control the world and she takes into her hands, feeble and nerveless for strife, weapons with which she is unfamiliar and which she is unable to wield," he writes. "Woman in strife becomes hard, harsh, unlovable, repulsive ..."

For the record, Root won the Nobel Peace Prize in 1912 for his advancement of international relations.

Argument: Women will vote to punish the men who have done nothing but give them everything they want

There are innumerable examples of ridiculous arguments made against women's suffrage, but how many of them are immortalized in four-part harmony?

The title of this little ditty by Frank Howard, published around 1869, is the first clue that it's a satire of the suffrage movement: "We'll vote against these terrible men." The verses feature women lamenting their hard, luxurious lives bereft of suffrage.

"My husband gives me but once a week, a hundred dollar bil to spend. Of such cruelty I'll no farther speak, but won't stand it long, depend ..." one verse goes. In another verse, a woman "leads a wretched life, she seems sad all the while; It's true she rides in her carriage fine, and buys six dresses every week ... But of trifles we'll not speak. "

Then, of course, the chorus, in which these silly pampered suffragists vow to "Fix these 'dreadful men'" who have given them money, status and children but not their constitutionally enshrined right to a say in what happens in their government.