The National Zoo's baby panda has a name, and it means 'little miracle' 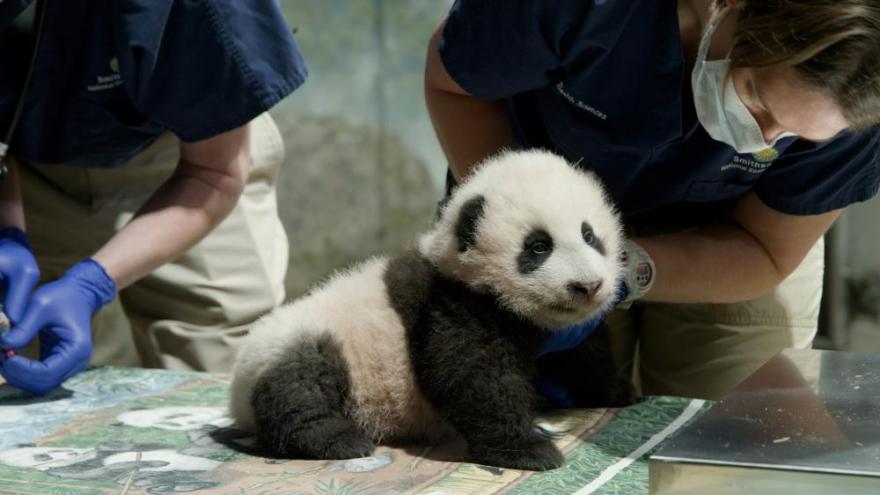 (CNN) -- The Smithsonian National Zoo's newest little miracle finally has a name, and it's as sweet as he is.

Meet Xiao Qi Ji, the zoo's roly-poly 3-month-old giant panda cub. His adoring public voted overwhelmingly for the name, which in Mandarin means "little miracle" -- a fitting name for a baby whose birth provided a healthy dose of joy during a dark year.

Xiao Qi Ji (pronounced Shiau-chi-ji) was born in August to 22-year-old mother Mei Xiang, who bravely gave birth on livestream. Since then, his every move has been documented by his keepers at the zoo, who regularly update the public on his progress while he's off exhibit.

He's got some famous fans, including Washington Mayor Muriel Bowser, who called him the "cutest and most popular bear in the nation."

The country's unofficial No. 1 cutie has hit some important milestones: He weighs over 10 pounds now, and last month he finally opened his eyes. The petite ursine has yet to take his first steps, but he's a proficient crawler.

Xiao Qi Ji is indeed a miracle. He was born through artificial insemination, the first time a zoo has ever successfully executed a pregnancy and birth using frozen semen, according to the National Zoo.

His birth provided a much-needed supply of hope during the challenging Covid-19 pandemic, too. As Chinese ambassador to the United States, Cui Tiankai, said in a message to the young cub, Chinese and American panda lovers alike have delighted in watching him teeth, roll and snuggle up to his mother.

When the zoo's little miracle turns 4, he'll move to China -- part of the breeding agreement between the country and the National Zoo. For now, though, his fans can watch him and his family on the zoo's 24-hour Panda Cam.