The new US Covid-19 test requirement for travelers: What you need to know 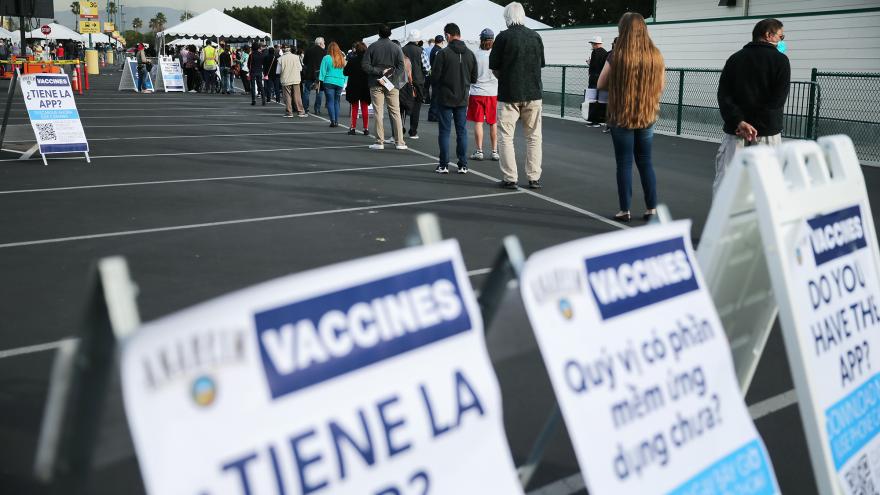 People who have been vaccinated are still required to have a Covid-19 test before entering the US. - Mario Tama/Getty Images

(CNN) -- Earlier this week, the US Centers for Disease Control and Prevention announced that, as of Tuesday, January 26, all air passengers ages two and older must show proof of a negative Covid-19 test to enter the United States.

The new rule includes US citizens and legal permanent residents.

Following the travel news, panic and confusion ensued, according to Henry Harteveldt, a travel industry analyst and founder of Atmosphere Research Group.

"The order created a lot of anxiety, partly because the timeline from the announcement to when it goes into effect is so short and partly because it was unclear exactly what it meant," he says.

Both US residents who are currently abroad or had plans to go abroad and return January 26 or later as well as international travelers who are scheduled to fly to the United States have numerous questions about what they need to do to ensure their entry into the country, says Harteveldt.

In addition, some resorts and local governments are scrambling to get prepared to offer testing to US-bound fliers.

Questions -- from what kind of negative Covid-19 test you need to the documentation you're required to show when you're at the airport, and to whom -- are addressed below:

What kind of Covid-19 test is considered acceptable for travelers?

Travelers bound for the United State on international flights must have a viral test, according to the CDC. PCR and antigen tests both qualify.

How far in advance can I get tested before entering the country?

The test time frame is no more than three days before your flight.

CDC spokesperson Caitlin Shockey says that if you are flying on a connecting flight into the US, a valid test is one that is taken no more than three days before your flight departs to the United States but only if the entire trip was booked under a single passenger record.

Also, each layover between those connections can't be longer than 24 hours.

If your connecting flight to the US was booked separately or you have a longer connection, you need to get tested within the three days before your final flight departs for the US.

If you are flying out of the country for less than three days, you can take a test in the US before you depart and use it for your return or take a rapid test before your return flight.

If your flight is delayed past the three-day window, you must take another test to board your flight.

What happens if I'm traveling internationally now and come back after January 26?

It doesn't matter when you left, according to Shockey: If you are returning to the US on or after January 26, you will have to be tested and show proof of being Covid-19 negative before being allowed to board.

I'm visiting a US territory, do I need to get tested?

No. US territories and possessions of the US are exempt, according to the CDC.

If I'm a US resident and have to pay for a test while I'm abroad, will my health insurance cover it?

It depends on your insurance plan, says Zach Honig, the editor at large of the travel site The Points Guy.

But Honig says that you should definitely file for reimbursement. "It never hurts to ask," he says.

Who is checking test results at the airport?

It depends on the destination, but you'll likely be asked for documentation of a negative test result from the first airline employee you have contact with when you're at the airport, says Harteveldt.

That could be at the ticket counter if you're checking in bags or with the gate agent if you have no checked bags.

Honig says that the new mandate may mean that you won't be able to check in online for your flight to the US. "You'll have to check in at the airport, so be sure to arrive in advance to give yourself enough time to do so," he says.

I'm flying to the US by private plane. Does this new requirement apply to me?

Yes, the order applies to commercial and private flights, according to the CDC.

What kind of documentation do I need to show?

The CDC is requiring fliers to have a paper or electronic copy of their negative test results.

Harteveldt highly recommends that travelers have a hard copy of their negative test results as opposed to having them only on their phones.

"It may be difficult for an agent to read the document on your phone, and you don't want to give them an excuse not to board you," he says.

I already had Covid-19. What kind of documentation do I need?

If you recovered from the virus more than three months ago, the CDC's Shockey says that you will need to retest and show proof of negative results before being allowed to board your plane.

I've gotten the Covid-19 vaccine. Do I still need to test?

How do I find a local testing site while I'm abroad?

It will vary by country, but Honig strongly recommends making sure that you'll be able to get a test at your destination before you leave the US. "It can be challenging in some places to get tested, so it's important to get confirmation of a place before your trip," he says.

You can find a testing location by asking your hotel in advance of your trip or checking the destination's official tourism site.

In addition, in the past week, a growing number of hotels, especially in destinations that are popular with American travelers, have started to offer on-site testing.

In St. Lucia, for example, more than 20 properties and villas will offer free rapid testing.

Baha Mar in the Bahamas has rapid tests for $25 and PCR tests for $125. At La Colección Resorts throughout the Dominican Republic and Mexico, rapid testing is free. And at Curtain Bluff in Antigua, testing is $250 a person for either PCR or rapid test results.

The return time for test results varies by property.

Are airlines allowing passengers to change their flights so that they can arrive in the US before the testing requirements take effect?

Some are allowing free changes including waiving the difference in fare.

Delta, for example, is waiving the fare difference through February 9 for customers who were booked to travel internationally to the US through February 9, if they rebook their trip to begin on or before January 25.

American Airlines and United Airlines are also waiving the fare difference for customers because of the new requirements.

With American, customers who have flights scheduled from January 12 to February 9 can rebook for no charge if they're departing from and arriving into the destinations on their original ticket. However, their trips must start on or before January 25.

With United, the fare difference will be waived for fliers rebooking international tickets purchased on or before January 12 for scheduled travel to the US through February 15.

My test result came back positive. Now what?

Shockey says that you should self-isolate and delay travel if symptoms develop or a predeparture test result is positive until you recover from Covid-19.