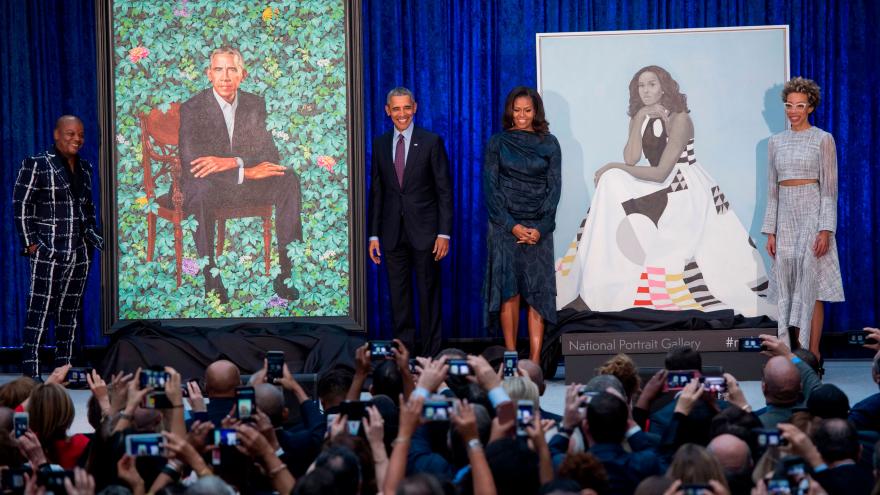 Three years after Barack and Michelle Obama\'s official portraits were unveiled at the Smithsonian\'s National Portrait Gallery, the paintings have arrived at the Art Institute of Chicago, where the former President and First Lady had their very first date. - Saul Loeb/AFP/Getty Images

(CNN) -- Three years after Barack and Michelle Obama's official portraits were unveiled at the Smithsonian's National Portrait Gallery, the paintings have arrived at the Art Institute of Chicago, where the former President and First Lady had their very first date.

On display there through mid-August, the artworks by Brooklyn-based Kehinde Wiley and Baltimore-based Amy Sherald -- the first Black artists to be included in the National Portrait Gallery -- have drawn millions of visitors, with Sherald's portrait of Michelle Obama even inspiring Halloween costumes that year.

To commemorate the Chicago homecoming, the former First Lady and Sherald took part in a virtual conversation hosted by the Institute and moderated by Thelma Golden, the director and chief curator of The Studio Museum in Harlem. Reflecting on the artists' interview process, which included personal visits to the Oval Office to speak with the couple, Obama said it must have been "a little intimidating."

She and the President kept an open mind about who would paint their portraits -- "until Amy walked in," she said. The artist and the First Lady appear to have clicked almost immediately.

"The more she talked, the more she and I just started connecting ... Barack kind of disappeared from the conversation," she said with a laugh. "Her presence, her aura is something that I connected with immediately," she explained, though she also noted the strength of her talent, creativity and purpose.

Though both Sherald and Barack's portraitist Wiley deal with the representation of Black figures in a historically White portrait tradition, Wiley's depiction of the President was filled with verdant greenery and vibrant tones, while Sherald's take on the First Lady was more muted. Against a robin egg blue background, she painted her skin tones in grisaille, or grayscale; she's known for the technique in order to "exclude the idea of color as race," as she has been quoted as saying.

"I honestly had never even considered painting Barack. In my mind, it was like, I'm going to paint Mrs. Obama," Sherald said in the recorded conversation. "I think that I'd never been more ready for that moment. I feel like everything I've done in my life was to prepare me for that moment."

When it came to choosing the dress that Obama would wear for the photo shoot that Sherald used as the basis of the painting, the artist and the First Lady's stylist, Meredith Koop, settled on a grid-patterned black and white Milly dress with accents of pink, yellow and red. Though there was no direct connection, Sherald saw a visual resemblance to the famed Gee's Bend quilts made by a community of Black women in rural Alabama.

"I realized that I had the opportunity for the whole painting to tell a story, and I wanted to be able to ground you, not only in art history and within the history of the United States, but within Black history too," Sherald told Obama.

Since painting the portrait, Sherald has become one of the most famous contemporary figurative painters, though her impact has stretched beyond the art world.

"I remember visiting a school in Baltimore and walking into the art room, and the level of excitement was stunning," Sherald recalled. "I might as well have been Jay-Z when I walked into that classroom."

During the virtual talk, the former First Lady also discussed her personal connection to the art world, and what the portrait has meant to her and her family.

"Not many people know that my father was a budding artist and he had an opportunity to take some courses at the Art Institute," Obama said of her late father, Fraser Robinson. "Now, like a lot of Black men his age, he didn't have the resources to invest and build a career in that area. He had to put down his paints and his clay and support his family."

She also revealed that one night, after the National Portrait Gallery had closed, the Obamas took their daughters and Michelle's mother to see the paintings in the empty museum. "(It was) quiet and (I was) watching my mom, Marian Robinson, sit at the base of my portrait and look up at it with such a level of awe," she recalled. "And for me, watching her see me in that way meant the world to me."

The portraits are embarking on a five-city national tour until May 2022. After leaving the Art Institute of Chicago, they will head to the Brooklyn Museum, the Los Angeles County Museum of Art, Atlanta's High Museum of Art and The Museum of Fine Arts in Houston.