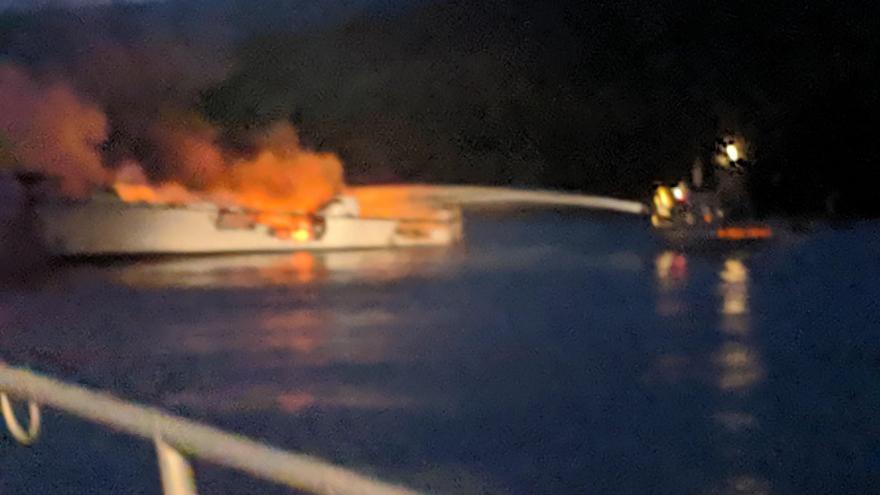 (CNN) -- The US Coast Guard on Tuesday suspended the search for victims of a deadly Labor Day boat fire off the California coast, officials said.

Of the 39 people aboard the 75-foot dive boat Conception, only five people -- four crew members and a captain -- were found alive, officials said.

Twenty bodies have been recovered. They have been identified as 11 women and nine men, Santa Barbara County Sheriff Bill Brown told reporters.

United States Coast Guard Capt. Monica Rochester said the search was suspended because no other people were seen entering the water. An aircraft that flew over the scene on Tuesday didn't see any additional signs of debris or distress.The search and rescue operation is now a recovery mission, she said.

"It is never an easy decision to suspend search efforts," Rochester said. "We know that this is a very difficult time for families and friends of the victims."

Divers saw four to six bodies in the wreckage but couldn't recover them before nightfall because the boat was unstable, Brown said. Crews will try to stabilize the boat so divers can safely enter it to recover the remaining bodies, he said.

Thirty-three people had signed up to spend what promised to be a glorious weekend for scuba divers aboard the boat: unlimited diving among colorful underwater sea life, with gourmet meals served between dives.

But on the last part of the three-day trip, the ship caught fire off Santa Cruz Island.

"This is probably the worst-case scenario you can possibly have," Brown said. "You have a vessel that's on the open sea, that is in the middle of the night. I mean, it's 3:30 in the morning."

The company that operates the Conception, Truth Aquatics, declined to comment to CNN.

Authorities will use rapid DNA technology to identify those whose bodies were badly burned, Brown said. DNA samples are being collected from family members.

"There was an extraordinarily hot fire and the bodies do exhibit signs of extreme thermal damage," Brown said.

The technology, which can simultaneously analyze five DNA samples in 90 minutes, helped to quickly identify victims of the devastating Camp Fire in Northern California 2018, federal authorities said. It can take weeks get results in a traditional forensic lab.

Questions abound over why the boat caught fire.

A mayday call revealed the confusion between a Coast Guard dispatcher and the Conception's captain. But only the dispatcher's words could be heard.

The captain apparently reports a fire and provides a location. The dispatcher is heard saying, "And there's 33 people on board the vessel that's on fire, they can't get off? ... Roger, are they locked inside the boat? ... Roger, can you get back on board and unlock the boat, unlock the door so they can get off? ... Roger, you don't have any firefighting gear at all? No fire extinguishers or anything?"

At one point, the caller says, "I can't breathe."

Rochester, the Coast Guard captain, said there was "a lot of adrenaline, a lot of confusion" over the radio communication system. She said she believes the radio dispatcher "was trying to ask for information."

She said "there are no locked doors in accommodation spaces" where passengers slept on the boat.

"The only privacy that you have ... are curtains," she said.

While passengers were not locked in the sleeping deck, they were apparently trapped by the blaze, Brown said. One crew member was among the passengers who were asleep when the fire broke out, he said.

"There was a stairwell to get down the main entryway, up and down, and there was an escape hatch. And it would appear as though both of those were blocked by fire,' Brown said in an earlier press conference.

By 7:20 a.m., the ship began to sink in 64 feet of water. The boat had burned down to the water line, Santa Barbara County fire spokesman Mike Eliason said.

Ventura County firefighters reached the boat within 15 minutes, the fire department said. But by then, it was engulfed in flames.

Firefighters struggled to extinguish the fire because each time it was snuffed out, flames flared back up -- perhaps because of the fuel on board, the Coast Guard's Aaron Bemis said.

A local captain responds to the mayday call

Capt. Paul Amaral, owner of maritime towing company TowBoatUS Ventura, heard the mayday call from the mainland California city of Ventura. He jumped into his 27-foot boat and started the 30-mile trip to Santa Cruz Island.

"Once I got on scene there was only one fire boat trying to put out the fire," Amaral said Tuesday.

"I proceeded to do a coastline search for passengers, and once I didn't find anyone, I offered assistance on fire fighting."

At one point, the Conception broke free from its anchor and started drifting toward the island -- meaning larger firefighting boats couldn't go any closer.

So Amaral had to step in, "I was in a much smaller 27-foot boat and was able to go in close to the boat, attach a chain and pull it away from the island," he said.

After the boat sank, Amaral said several bodies surfaced. He said he helped with the recovery efforts.

"I have responded to several boat fires, but to know these people were trapped on that boat, it's horrific," he said.

James Kohls waited anxiously to learn the fate of his brother, Mike Kohls, the galley cook and a deckhand on the Conception.

"It's very surreal at the moment," he told reporters. "They were going to let me know whether he was one of the survivors that got off."

He said Mike Kohls, a lifelong surfer and father of a daughter, is typically making breakfast for the passengers on the ship around 4 a.m.

Eliason, the fire department spokesman, said it's still possible some passengers may have survived. But the odds are stacked against them.

"We're still holding hope that someone may have swum to shore," Eliason said.

"When they anchor overnight, they're pretty close to shore. We have to hope, but we plan for worst-case scenario."