The thousands of wishes the pandemic put on hold 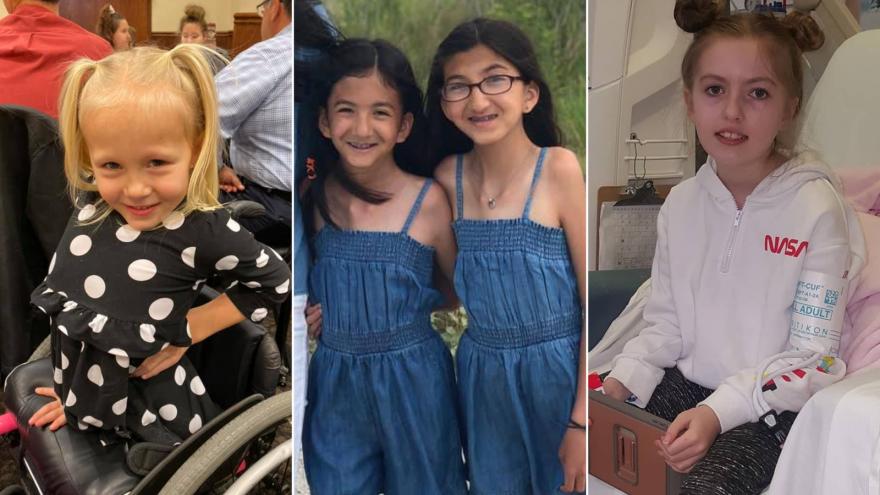 The 5-year-old planned to tour Disney World, SeaWorld and Universal Studioswith her sisters in April wearing the matching princess outfits their grandma bought for them.

But that trip, organized by the Make-A-Wish Foundation of America, is one of thousands of wishes that were put on hold as cases of coronavirus grew in the US.

The vast number of postponed wishes is unprecedented, says Frances Hall, the vice president of mission advancement for Make-A-Wish.

"We have delayed travels intermittently just according to hurricanes and tornadoes that we've experienced over the years but nothing like this pandemic," she said.

The nonprofit, which grants wishes to children and teens who are battling often devastating illnesses such as cancer, estimates about 5,000 wishes will be postponed by the end of the summer due to the pandemic. Nearly 80% of them involve travel, according to the foundation. Others that were postponed involved gatherings.

That means Emberlyn, who was diagnosed with caudal regression syndrome, a rare illness that's impaired the lower half of her body, will have to wait a little longer for the trip of a lifetime.

So too, willSavannah and Tallulah, who were scheduled to fly out last month to an apartment nestled in the heart of Paris. That trip also has been postponed indefinitely by the organization that's fulfilled more than 330,000 wishes in its 40-year history.

Learning French for a trip to Paris

The sisters and their family, who live in Highlands, North Carolina, were delighted when the Make-A-Wish Foundation said it would grant a wish for each of the girls.

The news came as the family was taking on the daunting task of trying to better understand their condition: congenital titinopathy. The rare disease has unleashed more and more symptoms since their birth, including a curved spine and loss of limb strength.

"I broke down," their father, Billy Leonard, says. "It is such a big thing, at least it is in my heart, to carry something as a family -- kind of on your own a little bit for so long, especially when it's undiagnosed -- and then to have somebody call up and say, 'We want to bless you,'" he said.

The trip to Paris was Savannah's wish, he said. The 13-year-old, an artist herself, wanted to gaze into Monet's landscapes and stroll through the city's renowned gardens. She started planning the minute volunteers announced their trip was scheduled for April.

"She started learning French. She's still learning it," Leonard says. "(Her trip) got delayed, indefinitely at this point, but delayed. But man, they had put us right downtown and in a great apartment."

Tallulah, 11, is still deciding on her own wish.

In the meantime, Leonard says his family has been enjoying the little moments as they stay cooped up at home: playing board games while sipping on hot chocolate and listening to Christmas music, journaling altogether and competing on Mario Kart.

"You see blessings in the kind of things that some people take for granted," he says. "It''s fun to pop some popcorn and have a movie night or a Jeopardy night."

There's still no solid timeline for when trips will resume, according to Hall with the foundation.

The nonprofit has created a task force which has met weekly for more than two months to carve a path toward re-emergence. But no children will be visiting theme parks, traveling on planes or setting sail on cruise ships any time soon, she says.

Chatting with Oprah for an hour

But that doesn't mean all wishes are going unfulfilled.

While wishes that require travel and large gatherings, such as concerts, have been put on hold, others still are being granted.

In the months since the pandemic began, the organization has continued constructing playhouses, planned slumber parties, gifted musical instruments, phones and, most recently, created a concrete path leading a child who usesa wheelchair to the lake behind his home, according to Hall. For another child, the organization installed a massive fish tank, Hall says.

"Whatever the child's imagination reveals, we try to work to grant it," she said.

The pandemic has also led to an increase in one particular type of wish: virtual celebrity meetings.

Smith, who was diagnosed with a brain tumor, often lines the walls of her New York hospital room with Winfrey's quotes, as words of encouragement.

"Everything I've seen or read about Oprah is always positive," she told CNN in an email. "She's caring, generous, charitable and is always helping others."

They spoke to one another for about 45 minutes, exchanging book suggestions and discussing the importance of family.

"The best part of the video call was when Oprah told me that I'm special," Smith said. "It really hit the spot and made me feel so happy."

And in a small town near Atlantic City, New Jersey, an entire community stepped in to recreate the wish one 10-year-old girl has been waiting for.

Khloe Sudol was looking forward to planning herown wish -- a trip to Disney World -- after finally returning home in March from a stay in the hospital to treat a blood disorder she was diagnosed with last year.

Though her trip was not scheduled yet, Khloe's mother, HeatherSudol, says they hoped to take it soon after she returned home.

But a statewide stay-at-home order meant Khloe would have to stay put and, perhaps, miss out on visiting Disney World.

"And then my friend, she owns a party-planning business so she had all the (Disney) characters, she said ... 'If Khlo can't get to Disney, we're going to bring Disney to her,'" her mom says. "So that's what they did."

The little girl's neighbors, family members, teachers and friends gathered in more than 75 cars and drove outside her grandmother's home to celebrate her birthday on April 1, in a massive, Disney-themed parade.

"I couldn't stop crying," Sudol said. "I was just completely floored and I still am... it's been a hard, a really hard time for my family."

The young girl, usually shy and quiet, said it was her best birthday yet.

As the pandemic bears on, about 30 more wishes are postponed each day, according to the foundation.

With their wishes on hold, children and their families are making the best of their time at home.

Savannah's family is preparing to celebrate her 14th birthday in June -- a day Leonard says he hopes will make his daughter feel like a true princess, and include all her favorite food and movies and perhaps a good round of Jeopardy.

And in Lincoln, Nebraska, Emberlyn's family is anticipating the young girl's return home from the hospital. As they wait for an end to the pandemic that put her wish on hold, they're taking comfort in care packages and princess activity kits from the Make-A-Wish Foundation -- small reminders of the magical trip to come.