The United States is reporting 20,000 coronavirus deaths, more than any other country 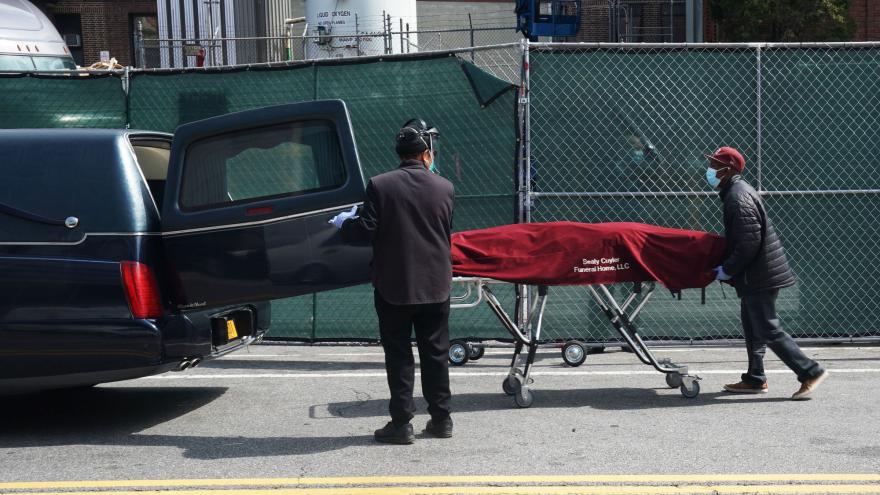 (CNN) -- More than 20,000 people have died from the coronavirus in the United States, which now has more reported deaths than any country in the world, according to a tally from Johns Hopkins University.

The US death toll on Saturday climbed to 20,283,surpassingthat of Italy, which is reporting 19,468 deaths, per Johns Hopkins.

At least 2,074 deaths were reported in the US on Friday, the largest increase in coronavirus fatalities the country has seen since the beginning of the outbreak. At least 522,286people have tested positive for the virus, according to Johns Hopkins.

Of the deaths reported Friday, 783 occurred in New York state, bringing the statewide death toll to 8,627, Gov. Andrew Cuomo said Saturday. That was a slight drop from the state's all-time high in single-day fatalities, which occurred Wednesday with 799 deaths. There were 777 deaths Thursday.

"You can see that the number is somewhat stabilizing, but it is stabilizing at a horrific rate," Cuomo said. "These are just incredible numbers depicting incredible loss and pain."

But Cuomo also shared what he called good news, saying the state's curve "is continuing to flatten."

"The number of hospitalizations appears to have hit an apex, and the apex appears to be a plateau," the governor said, where numbers will level out for a period before dropping.

The hospitalization rate is also down, Cuomo said, as are the number of intensive-care admissions.

"Still people getting infected," he said, "still people going into the hospital, but again, a lower rate of increase."

The US likely saw a peak in its daily death toll, according to Dr. Chris Murray, the director of the Institute for Health Metrics and Evaluation at the University of Washington -- who created the model the White House is using to gauge the peak of coronavirus cases.

"We re-run the model, basically, almost every night -- and the new returns from different states are suggesting different peaks in different states, but at the national level we seem to be pretty much close to the peak," he said Friday.

That model projects about 61,500 Americans will lose their lives to the virus by August -- if the country keeps social distance measures in place until the end of May. If they factor in states that may lift these rules by May 1, the numbers "don't look good," Murray said.

While health experts are encouraged by signs that social distancing measures are having a positive impact, they warn re-opening the country too quickly could set the US back.

Despite the positive signs, the US had not yet reached its peak in cases, Dr. Deborah Birx, the White House coronavirus coordinator, said Friday.

Saturday marked the first time every US state was under a federal disaster declaration simultaneously, after President Donald Trump approved one such declaration for Wyoming.

It was the 55th disaster declaration issued in response to the coronavirus, following others in the other 49 states, Washington D.C., the US Virgin Islands, the Northern Mariana Islands, Guam and Puerto Rico.

Deciding when to re-open the US

In New York City, Mayor Bill de Blasio announced Saturday that schools there would remain closed through the end of the school year while students continued to receive remote instruction.

But that was soon undercut by Gov. Cuomo, who said that "no decision" had been made on closing schools through the end of the year, adding he valued the mayor's "opinion."

In response, a spokeswoman for the mayor's office said Cuomo's "reaction to us keeping schools closed is reminiscent of how he reacted when the Mayor called for a shelter in place. We were right then, we're right now."

Additionally, Cuomo said no decision has been made on when businesses will reopen. That step, he said, should be coordinated with schools.

The state will gather the best minds to study whether reopening the economy would trigger a "second wave" of infections, Cuomo said.

"The worst thing that can happen is we make a misstep and we let our emotions get ahead of our logic and fact, and we go through this again in any manner, shape or form," he said.

In Ohio, the number of people impacted is lower than previously projected. But before the state attempts a return to normal life, Gov. Mike DeWine said more work needs to be done and there will need to be "a lot more testing."

"The reopening is going to have to be, you know, one step at a time, one stage at a time," he said.

"We don't want to be premature," he said, "but we also want to assure people that we're planning for this."

Meanwhile, local and state officials are cracking down on mass gatherings like church services as Easter weekend begins.

In Kentucky, authorities will record license plates of those who show up to any gatherings and hand that information over to the local health department, which will require those individuals to stay quarantined for 14 days, Gov. Andy Beshear announced.

The state is down to less than seven churches statewide that are still "thinking about" having an in-person service this weekend, he said.

President Donald Trump, who two weeks ago said he was hoping to have the country open back up by Easter, said Friday he wouldn't do anything until he knew the country was healthy again.

"I would love to open it. I have not determined anything, the facts are going to determine what I do. But we do want to get the country opened, so important," he said.

Internally, officials are pushing to reopen the country by next month, with specific discussions underway about May 1, a person familiar with the talks told CNN.

"I'm going to have to make a decision and I only hope to God that it's right decision," the President said Friday. "But I would say without question it's the biggest decision I've ever had to make."

The opening may come at different stages, Trump said.

Risk of rebound in cases in July

Hospitalizations in Connecticut are dropping. Arkansas also saw the lowest number of hospitalizations compared to neighboring states. The number of affected people in Ohio is lower than previously projected. And in California, hospitals saw a nearly 2% drop in ICU patients.

In New Jersey cases climbed to 58,151, Gov. Phil Murphy said Saturday. But while that number is "scary," the state is "beginning to beat this virus back," he said.

Government projections obtained by The New York Times show coronavirus infections and deaths could dramatically increase if social distancing and other measures were lifted after 30 days.

If stay-at-home orders were lifted after a month, the government report says, there would be a bump in the demand for ventilators and the US death toll could reach 200,000, the Times reported.

A Health and Human Services spokesperson told CNN, "We do not comment on any alleged, leaked documents." CNN has reached out to the Department of Homeland Security for comment.

Murray told CNN Friday night that if mitigation measures were lifted by May 1, cases could go back up in the summer.

"If we were to stop at the national level May 1st, we're seeing (in models) a return to almost where we are now sometime in July, so a rebound." Murray said. "There's a very substantial risk of rebound if we don't wait to the point where most transmission is near zero in each state."

According to the IHME model created by Murray's team, states such as New York and New Jersey may have passed their peaks this week, but others -- including Florida and Texas -- could see the worst by the end of the month.

New York and New Jersey account for about half of all US deaths that have been reported, the CDC said Friday. By Saturday, at least 2,183 people had died in New Jersey, the governor said.

De Blasio, the New York City mayor, said Friday that "this is a week where we've reached milestones we could never have imagined: 5,000 New Yorkers lost, so many more than we even lost on our worst day on 9/11."

The CDC cautioned a variety of factors -- including population density and testing capacity -- could explain why some regions have more cases and deaths than others, adding that case counts are also likely "underestimated" and deaths are underreported.

California Gov. Gavin Newsom said thanks to social distancing measures, the state has been able to flatten its curve and expects to see its peak in May.

In Mississippi, Gov. Tate Reeves said he was "very concerned" and warned residents the "peak is coming soon." The state is under a shelter-in-place order until April 20.