The United States' reported coronavirus deaths approach 52,000, over a quarter of the world's known tally 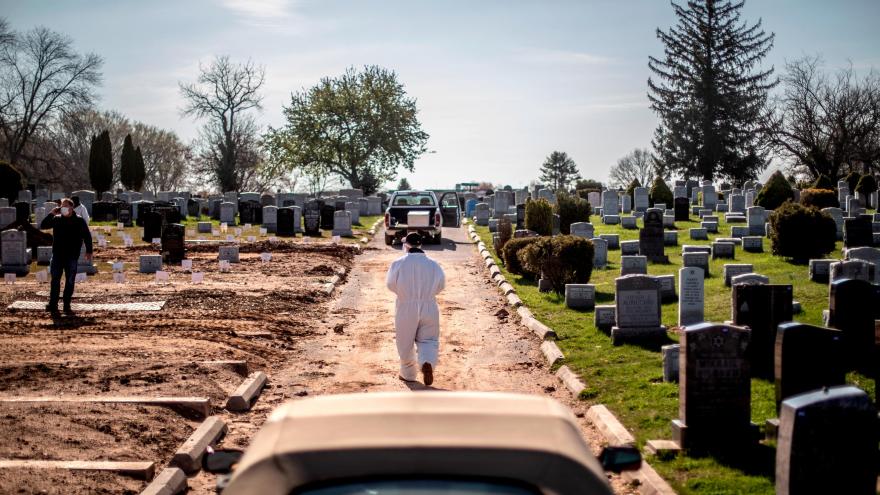 Credit: David Goldman/AP
(CNN) -- Less than three months since the first known coronavirus death in the US, the country's reported Nearly 52,000 Americans have died of the virus so far -- a number that increases daily as a result of new fatalities and states reviewing previous deaths that had not been tied to the disease.

Nearly 52,000 Americans have died of the virus so far -- a number that increases daily as a result of new fatalities and states reviewing previous deaths that had not been tied to the disease.

The virus has killed at least 197,000 people worldwide, according to Johns Hopkins University.

In the US, limited testing was partly why California officials initially did not count two February deaths as coronavirus-related. This week, they confirmed the two victims -- a 57-year-old woman who died February 6 and a 69-year-old man who died February 17-- are so far the earliest known to have died of Covid-19 in the US.

New efforts by some states to trace more cases will give officials a better idea of the magnitude of the pandemic in the country. That, in addition to testing -- which experts say is still not where it needs to be.

The US has conducted about 5.1 million tests, but Dr. Anthony Fauci, the nation's leading epidemiologist, said this week the nation needs to ramp up testing. Two new reports from public health experts and economists argue that to safely reopen states the country needs to conduct millions of tests per week.

And as health officials race to get the virus under control, state leaders are setting the date they'll begin reopening their economies -- decisions that President Donald Trump has said are entirely up to governors.

Georgia Gov. Brian Kemp on Friday opened some businesses, including barber shops and hair salons, tattoo parlors, gyms and bowling alleys. The state has recorded more than 22,491 infections and at least 899 deaths, according to a tally by Johns Hopkins University.

Georgia was one of the last states to call for stay-at-home orders and one of the first ones to start easing those restrictions.

The state's move runs against the advice of experts at the Univeristy of Washington's Institute for Health Metrics and Evaluation, whose model suggests Georgia should not begin to reopen until at least June 22.

But on Friday, business owners and customers in Georgia donned masks and gloves across the state as they returned to stores ordered shut about two weeks ago by the governor's stay-at-home order. Theaters and dine-in restaurants will be allowed to reopen Monday.

Some business owners told CNN they felt they had no choice but to reopen. Others said they did so to pay their bills.

"I'm at the point where I have to do something ... I'm about to lose my business if I don't," Tim Timmons, owner of Salon Gloss in Woodstock, said.

Timmons said there were measures in place to prevent the possible spread of the virus. The business wasn't running on full staff and employees stood 14 feet apart. Customers had their temperatures taken when they arrived and were also asked whether they've come into contact with anyone who's had the virus. During shampoos, they covered their faces with towels.

But other business owners said attempting to reopen wasn't in their plan.

"I said, 'No, absolutely not. Get your hair done for what?'" Sabrina Watkins said of her hair salon in College Park, an Atlanta suburb. "There's a pandemic, people are dying. As much as I love the business, now is not the time, regardless of who says it is."

More states partly reopen while others set the date

Alaska allowed salons and restaurants to open in many areas Friday, though restaurants must keep distance between tables and can't exceed 25% of their normal capacity. The state also strongly encouraged face coverings.

Earlier this week, South Carolina retail stores reopened, but can operate only at 20% capacity or five customers per 1,000 square feet.

In Iowa, elective surgeries and farmers markets will begin reopening on Monday.

"We are pursuing a careful, measured approach to reopening our economy that does not depend on heavy-handed mandates but instead provides practical tools for businesses of all sizes," Lee said.

Other states, including Colorado, Minnesota and Montana, will ease restrictions in varying degrees in the coming week. And other governors are setting dates for when their reopening plans will kick into action.

Yet other leaders have stopped short of setting a timeline.

In San Francisco, which issued the country's first sweeping stay-at-home order in mid-March, Mayor London Breed said the order is "very likely" to be extended for a few more weeks past May 3.

"How we reopen is going to be important to ensuring that we do it responsibly so that we don't go backwards," said Breed, who stressed the importance of having enough PPE, testing and requirements for social distancing.

CDC, Lysol warn not to digest disinfectants after Trump's remarks

As state leaders weigh the best options for moving forward, many have turned their attention to possible treatments. The World Health Organization recently said the world is "weeks to months" away from knowing which drugs will work against the virus.

In a briefing this week, Trump suggested the possibility of ingesting disinfectants to protect people from the virus -- and since then, companies and health officials issued warnings urging Americans not to do so.

Reckitt Benckiser -- the company behind Lysol and Dettol -- issued a statement Friday after "recent speculation and social media activity."

"Under no circumstance should our disinfectant products be administered into the human body (through injection, ingestion or any other route)," the company said.

A similar warning came from the US Centers for Disease Control and Prevention.

"Household cleaners and disinfectants can cause health problems when not used properly. Follow the instructions on the product label to ensure safe and effective use," the CDC tweeted.