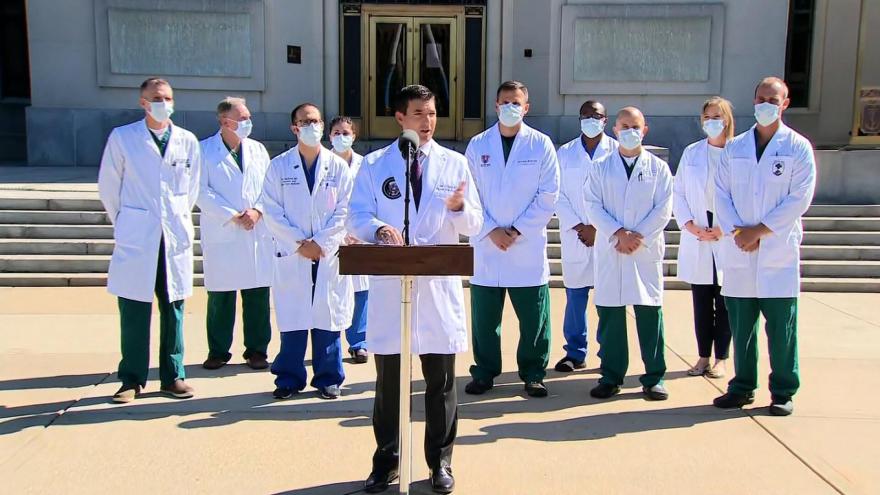 White House physician Navy Cmdr. Dr. Sean Conley giving an update to the press about President Donald Trump's health as he is being treated at Walter Reed National Military Medical Center for Covid-19 on Oct. 3.

(CNN) -- The White House physician, surrounded by a group of other doctors, emerged just before noon on Saturday from Walter Reed medical center to give a sunny update on President Donald Trump's condition after his positive Covid-19 diagnosis.

Roughly half an hour after that rosy assessment, came this from a "source familiar with the President's health" speaking to the print and TV pool reporters, "The President's vitals over the last 24 hours were very concerning and the next 48 hours will be critical in terms of his care. We are still not on a clear path to a full recovery."

Uh, what? It's not hard to reconcile what Conley said about Trump's current condition with what the "source familiar with the President's health" said mere minutes later. It's impossible to reconcile the two statements.

And the net result is that the public has no real idea what condition Trump is actually in. Does he have a very mild case of the virus as spokespeople and allies -- and Conley -- have suggested since we learned he was positive for coronavirus early Friday morning? And that he was taken to the hospital out of an abundance of caution? Or are there real concerns that Trump's condition is far more serious, as the use of an experimental Regeneron polyclonal antibody cocktail -- not yet approved by the Food and Drug Administration -- and the eerie background quote suggest?

There's simply no way of knowing, which is the problem. The President of the United States is the single most powerful person in the country -- and one of the most powerful in the world. The specifics of his current health matter for a number of reasons, but chief among them is -- if he is indeed sicker than Conley is letting on -- maintaining the continuity of government.

Contributing to the uncertainty is the fact that Trump has long obfuscated when it comes to his medical health prior to coming into the White House in 2017. In fact, we know less about his health than we do any modern president.

Consider this: Trump released zero medical records when he ran for president in 2016. What he did release was a letter from Dr. Harold Bornstein, his longtime personal physician, that asserted simply: "If elected, Mr. Trump, I can state unequivocally, will be the healthiest individual ever elected to the presidency. His physical strength and stamina are extraordinary."

Which, of course, is crazy. Bornstein had never examined any past president. So his ability to claim that Trump would be the "healthiest individual" ever to be president is roughly equivalent to my ability to say the same.

At the time the letter was released, it was subject to widespread mockery -- mostly because it read like Trump himself had written it. Which it turns out he did, at least according to Bornstein.

"He dictated that whole letter. I didn't write that letter," Bornstein told CNN in 2018. "I just made it up as I went along." Added Bornstein, "(Trump) dictated the letter and I would tell him what he couldn't put in there. They came to pick up their letter at 4 o'clock or something."

Bornstein also told NBC that Trump's medical records had been taken from him by former Trump bodyguard Keith Schiller and another man just days after the doctor told The New York Times that the President took medicine to grow his hair.

Then there was the unscheduled visit to Walter Reed days before last Thanksgiving, a trip dismissed by the White House as nothing more than the President getting a jumpstart on his annual physical -- although details that came to light later raise major questions about that explanation.

All of which brings us to not only the competing narratives of Trump's health offered on Saturday but also a series of inconsistencies in Conley's answers to reporters' questions.

Asked directly whether Trump had been administered supplemental oxygen as a sign he was having difficulty breathing, Conley said, "He is not on oxygen right now. He has not needed any today at all."

CNN had reported Friday night that the President was having some difficulty breathing.

Which all makes Conley's answers decidedly and purposely evasive.

Conley also offered a confusing timeline as to when Trump was given the experimental Regeneron polyclonal antibody cocktail, a timeline that initially suggested the White House was aware of Trump's positive test on Thursday as opposed to early Friday morning.

In a statement released just before 2 pm eastern Saturday, Conley clarified. "This morning while summarizing the President's health, I incorrectly used the term 'seventy two hours' instead of 'day three' and 'forty eight hours' instead of 'day two' with regards to his diagnosis and the administrations of the polyclonal antibody therapy," he said. "The President was first diagnosed with COVID-19 on the evening of Thursday, October 1st and had received Regeneron's antibody cocktail on Friday, October 2nd."

The simple truth is this: We do not, currently, have any clear sense of the President's condition -- or his prognosis. The reason? Because the White House physician seemed more interested in spinning a story about how hale and hearty Trump is than providing an objective set of medical facts free from political considerations.

Which isn't surprising. But it is a shame.