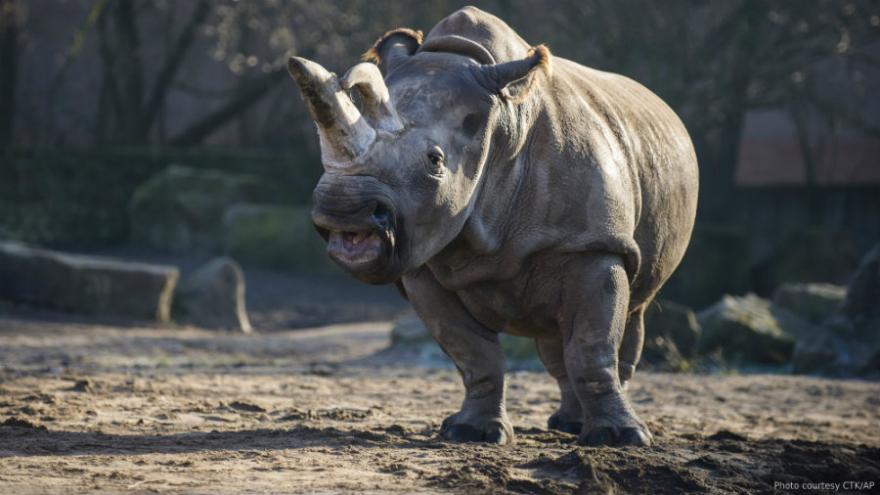 (CNN) -- With three northern white rhinos left in the world, the only male is gravely ill, raising fears the subspecies is getting closer to extinction.

Sudan made headlines last year when the Tinder dating app named him the "most eligible bachelor in the world" in a campaign to raise funds to save the subspecies.

With the animal on the verge of extinction, the fate of the subspecies rests on Sudan's ability to conceive with the two rhinos.

But Sudan's ill health is a cause for concern as experts scramble to ensure the subspecies does not go extinct.

"We don't think he will last for much longer," said Elodie A. Sampere, a spokeswoman at Ol Pejeta.

Sudan developed an age-related infection on his back right leg last year, Ol Pejeta said. It was assessed and treated, and he resumed normal movement in January.

A secondary infection developed beneath the initial one, and it's not responding to treatment.

"Euthanasia will be explored if we feel he is suffering too much and won't recover," Sampere said. "We do not want him to suffer unnecessarily. Right now he is still feeding and walking around ... albeit very little."

Even before his illness, Sudan was a crucial part of ensuring the beloved animal does not go extinct. So much so, he was protected from poachers by 24-hour armed guards.

Rhinos are targeted by poachers, fueled by the belief in Asia that their horns cure various ailments. Experts say the rhino horn is becoming more lucrative than drugs.

With only three left, there's a race against time to try to sustain the northern white rhino. A committee at the conservancy is looking at various alternative reproduction techniques, including in vitro fertilization.

The western black rhino was declared extinct seven years ago as a result of poaching. All five remaining rhino species worldwide are considered threatened, according to the conservation group Save the Rhino.