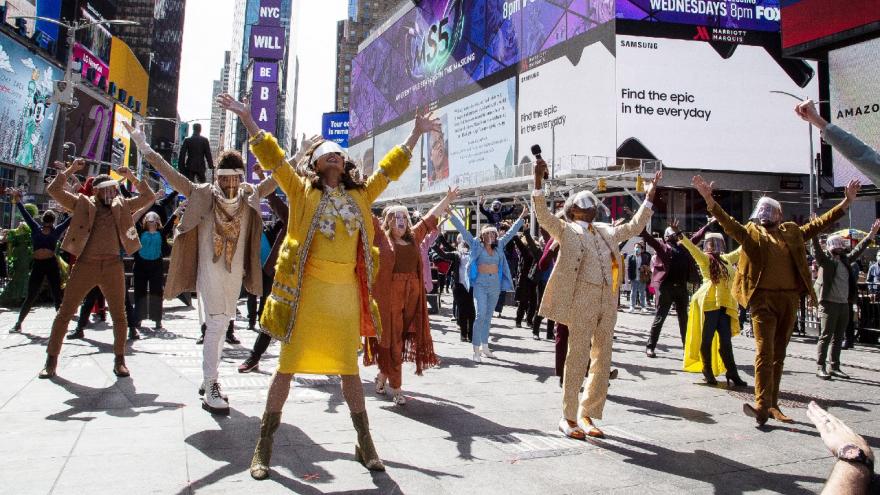 (CNN) -- Exactly one year after Broadway went dark due to the pandemic, members of the theater community reunited for a live, pop-up performance in Times Square.

"We Will Be Back," which took place on Friday, aimed to support the arts and shine a spotlight on the millions of people that work in the Broadway industry.

"We contribute $19 billion to the New York state economy alone, and we haven't been given any funding," Holly-Anne Devlin, director and producer of "We Will Be Back," told CNN. "This is really to show people that we're here and we need support, and we have love for our city."

All 41 Broadway theaters have been closed since March 12, 2020. While Broadway has gone dark before such as after the 9/11 terrorist attacks or due to strikes, the suspension of shows due to the Covid-19 pandemic has been the longest shutdown in its history, costing countless jobs and millions of dollars.

With the help of sponsors, including Broadway Cares/Equity Fights AIDS, Kaleidoscope Entertainment, NYCNext and the Times Square Alliance, Devlin said she and Executive Producer Blake Ross raised $32,500, which went toward paying arts workers who contributed to the event, including the performers, musicians, front of house workers and costume industry coalition workers.

The money raised also helped pay for pre-production preparations, including studio time to pre-record music, design work for the billboards in Times Square and purchase PPE for all performers, Devlin said.

Devlin said she spent seven to eight weeks preparing for the production, and performers had approximately one to two weeks to get ready.

"We're up against this hidden virus, and to be able to actually sing out loud and see the joy that it brings to people again after so long ... this reunion of sorts and this celebration of what is to come is something that will stick with the rest of my life," Tony Award nominee Charl Brown, who sang the opening number for Friday's performance, told CNN.

Brown said the performance's location was also significant, calling Times Square "the place of dreams, the place where every young kid who dreams of being on Broadway thinks of."

"New York will very soon be a safe place to come back to and enjoy the arts and entertainment," Brown said. "And we can't do it without people coming here to see us."

Broadway will most likely not be opening again in theaters for several more months, Devlin said. However, performers plan to continue these pop-up shows to remind the public that the end is near, and they will be back soon.