There is no sign that a bill on $2,000 checks is going to get a vote in the Senate 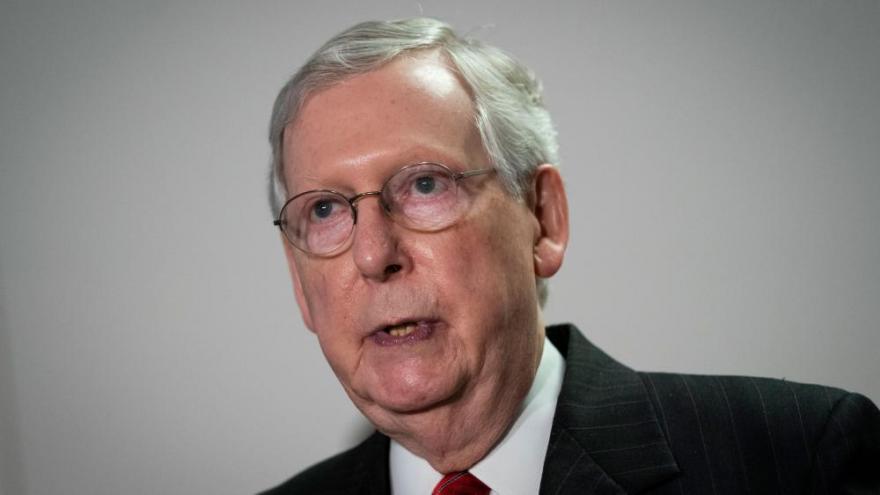 (CNN) -- Things are going to drag on in the Senate for a few days.

Bottom line: There is absolutely no sign right now that a standalone bill on $2,000 checks is going to get a vote on the Senate floor. It looks like McConnell is simply going to run out the clock. There were several opportunities on Tuesday when McConnell could have made that assurance or let Democrats pass the bill with a unanimous consent agreement that would have shielded his members from having to take a potentially tough vote.

Instead, he gave himself an out card down the line -- and only if he needs one -- by placing on the calendar a bill that would tie a repeal of Section 230 to increasing direct stimulus payments to $2,000 for Americans under a certain income level. The Kentucky Republican may never bring it up. It's there just in case he needs to put something on the floor. Democrats were furious. And there's nothing they can do about it.

Meanwhile, Treasury Secretary Steven Mnuchin tweeted Tuesday evening that direct payments to Americans were expected to begin arriving immediately. These would be the $600 payments included in the relief package President Donald Trump signed on Sunday evening.

It's important to remember that McConnell is essentially ignoring Trump's request at the moment. Remember, he never made Trump any promises about what he was or was not going to do on the Senate floor. Trump's statement Sunday night was full of things he thought he'd won. McConnell made no such mention on fulfilling those promises in his own statement thanking Trump. In a lot of ways, this moment isn't that dissimilar to how McConnell has managed Trump for four years, letting the President rant and vent only to quietly conduct things the way he thinks is best for his members in his own chamber (remember how when the tax bill was drafted, McConnell ignored Trump's later requests to bring up health care for the zillionth time).

Trump tweeted on Tuesday that unless senators had a "death wish," they better vote fast on $2,000 checks. This is a time to remember that McConnell literally wrote a memoir that was titled "The Long Game." McConnell isn't focused on the next five days or even the final weeks of Trump's presidency. He's thinking about his majority and his legacy far beyond that. Right now, leadership aides tell me that the thinking is that it may be enough for both Sens. David Perdue and Kelly Loeffler in Georgia to campaign on the fact that they support $2,000 checks. They don't necessarily need to have demonstrated they voted on it. Caving to a President, who had a negotiator in the room who agreed to $600 checks and is bullying members into voting "yes" on something that goes against the tenets of fiscal conservatism that they built their careers on -- that's not exactly McConnell's style.

At the end of the day, a lot of Republicans are still very uncomfortable with the idea of $2,000 checks for people who made less than $75,000. Even if they did support the direct payments in some capacity, they aren't comfortable with the House-passed bill. Sen. John Cornyn, a Texas Republican in leadership, told reporters Tuesday that he doesn't want the money to be "manna from heaven" for those who have been employed this whole time. He argued that if they did vote for bigger checks, they'd need to be far more targeted to people who have been out of work. That view is shared among a lot of members. Yes, a handful of Republicans senators have been on the record saying they'd vote for $2,000 checks. But note that none of them has said explicitly they would vote for the House bill.

"This is all funny money, borrowed money at this point. And that's another consideration, I mean being just ridiculously frivolous about the way we spend money and rack up debt. I think people are willing to do what we need to do when they feel like it's meeting a need, and it's an emergency, which we've already done and will probably continue to do. But this is just, I think, opportunistic on the part of the House," Cornyn said. "They think now they've got, they've got an issue. Unfortunately, it seems to be drowning out all the other good stuff we've done -- $4 trillion worth of relief for the public health and for the economy including these same people."

Let's never rule anything out. Dynamics change. If something from polling in Georgia begins to shift to the point that McConnell feels like he needs to give Perdue and Loeffler a vote, he will. And he now has one on the calendar he can bring up. Cornyn summed it up best when asked if he thought checks would happen: "I've given up making predictions around here. I didn't think I'd be here today, either. So, I don't know. I don't know the answer."

In the meantime: There is still at least one objection to moving to a final vote to override the National Defense Authorization Act. Vermont Sen. Bernie Sanders has shown no willingness to back off of his demands for a guarantee that there would be a vote on the checks. At this point, senators will return for a procedural vote Wednesday evening at 5 p.m. ET. That vote is simply procedural. A final vote to override could stretch into Saturday if Sanders continues to hold it up. Eventually, it will pass. It's just a matter of how long this takes.