There were conflicting accounts about packages sent to Breonna Taylor's address before fatal raid, documents say 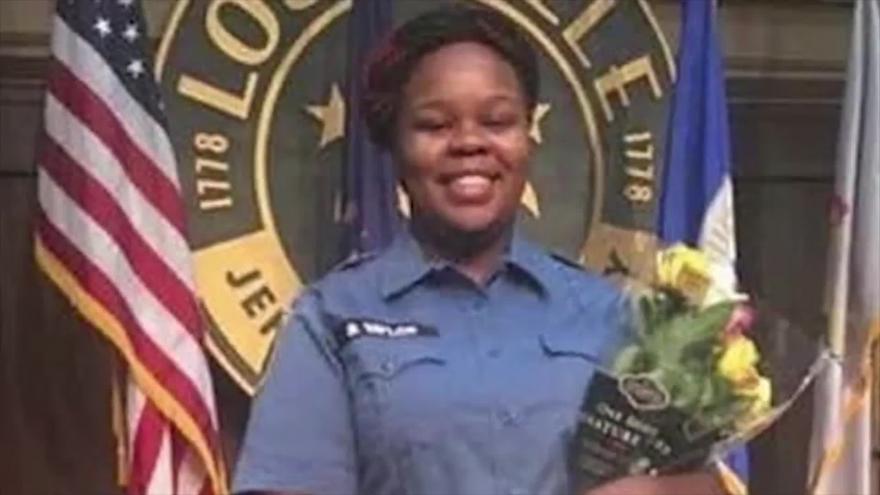 Change.org-Breonna Taylor was shot eight times by Louisville police after officers forced their way inside her home during an attempted drug raid in March.

(CNN) -- A game of telephone among three law enforcement agencies led to conflicting accounts of the evidence that brought police to Breonna Taylor's apartment, documents released Wednesday by the City of Louisville show.

At question was whether Jamarcus Glover -- the target of a Louisville Metro Police Department narcotics investigation -- had been receiving packages at Taylor's Louisville address.

Multiple law enforcement officers who were involved in the case told investigators that, before the raid, they did not believe Glover was receiving packages at Taylor's address. But in the search warrant that was used to enter Taylor's home, police said they had "verified" that Glover was "receiving packages" there, according to the warrant.

A CNN investigation in July found that detectives had linked Taylor's home to Glover, who was suspected of supplying a local drug house, and detectives suspected Taylor was tied to Glover's alleged drug ring, allegations that Taylor's family has consistently denied. Police said Glover had recently used Taylor's residence as his "current home address," according to an affidavit for a search warrant.

The affidavit also claims that police "verified through a US Postal Inspector that Jamarcus Glover has been receiving packages" at Taylor's address, and that "it is not uncommon for drug traffickers to receive mail packages at different locations to avoid detection from law enforcement."

In a transcript released by the City of Louisville, Sgt. Timothy Salyer, supervisor of the Shively, Kentucky, Police Department's Special Investigations Unit, told investigators in May that he and another officer, Shively Det. Mike Kuzma, had been contacted by Louisville Sgt. Jon Mattingly on January 17. Salyer said Mattingly asked whether they could check with the US Postal Inspection Service if any packages for Glover had been sent to Taylor's address.

Salyer told investigators that the LMPD officers had a habit of running postal inspector requests through a different agency because there was "bad blood" from a previous incident between LMPD and the postal inspectors. "They don't want any more dealings with Louisville Metro units," Salyer said of the inspectors.

CNN has reached out to the US Postal Inspection Service for comment, but has not received a response.

Identifying details of the previous incident were redacted from the transcript that was released.

Salyer and Kuzma -- who were interviewed separately by Louisville investigators -- said they checked with their postal inspector contact to see whether Glover had received packages at Taylor's address. The contact said no, according to what both Salyer and Kuzma told investigators.

"I told Jon Mattingly that, you know, 'hey no parcels,'" Kuzma told investigators, "and that was pretty much the end of it."

A few weeks later, however, Kuzma said another Louisville detective reached out to him, asking him to run the same address by the postal inspectors. Kuzma said he told her he had already asked, and no packages had been sent there to Glover.

Kuzma said he also told Nobles that there were no packages.

Kuzma told investigators he did not know whether other packages, such as from Amazon, were being delivered. In the transcript, Kuzma does not specify whether he also said that to Nobles.

Kuzma told investigators he did not know whether the inspectors meant there were no packages at all, or "if they were getting, like, Amazon boxes." In the transcript, Kuzma does not specify whether he also expressed that to any of the LMPD officers.

"They told me no," Kuzma said of the postal inspectors, "and that's what I passed on (to LMPD), was no."

Taylor, a 26-year-old EMT and aspiring nurse, was fatally shot in her Louisville apartment on March 13 as officers executed a warrant linked to their investigation of Glover.

None of the officers was charged with Taylor's killing. Ex-Detective Brett Hankison was charged with three counts of wanton endangerment because some of the shots he fired allegedly entered a neighboring apartment, where three people were present. He has pleaded not guilty.

Salyer told investigators that nearly a month after the raid, on April 10, Louisville Detective Joshua Jaynes, who wrote the warrant for the raid, texted him to ask yet again about any packages sent to the address in Glover's name.

"Exact same as what Jon Mattingly asked, but in April, a month after the shooting," Salyer told investigators.

Salyer told investigators he responded, "I think we hit that guy before," to which Jaynes texted back, "Interesting. It showed him getting mail from that address."

"It seemed odd," Salyer said of Jaynes' text. "I kinda thought, this is a month after the shooting and you're just now asking me if there has been a box in his name delivered there. He wrote a search warrant on it saying it was delivered there, but now you're asking a month later."

"I don't know how to say it without saying it looks like you're trying to cover your ass, is what it appears to me," Salyer told investigators, referring to Jaynes' April inquiry.

But in his own interview with investigators, conducted the next day, Jaynes said he understood the information from Mattingly's sources to mean that no suspicious packages were coming to Glover at that address, but that ordinary mail was.

In his own interview with investigators, conducted in March, just 12 days after Taylor was shot, Mattingly said he could not recall the name of the target on the search warrant.

"We didn't write it," he said of the search warrant. "We didn't do any of the investigations. We did none of the background."

Kent Wicker, an attorney for Mattingly, declined to comment Thursday. Neither Jaynes nor his attorney immediately responded to a request for comment.

None of the officers involved, in either department, is accused of wrongdoing.

Jaynes told investigators in May that the postal inspector's information merely served to confirm what he felt he already knew -- he said he had witnessed Glover at Taylor's address in January, receiving a package.

"I didn't need that line in there to get my (probable cause)," Jaynes said.