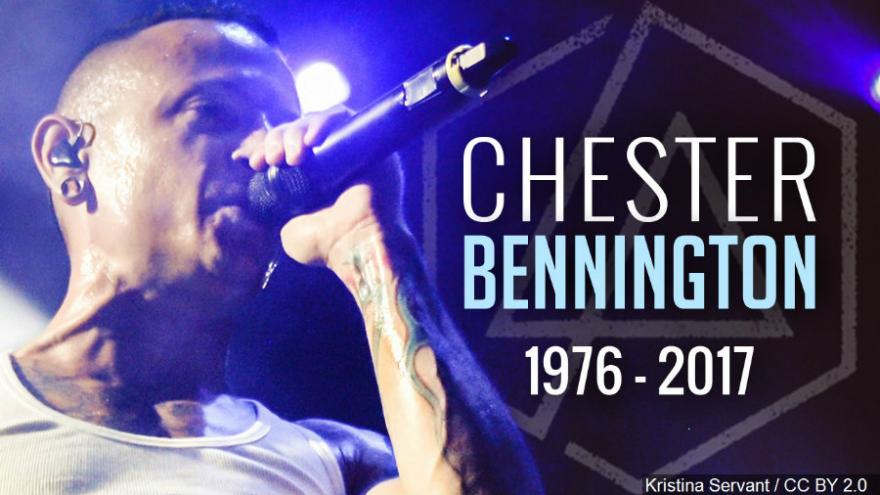 (CNN) -- Now, nearly a year after Linkin Park lead singer Chester Bennington took his own life, it's clear to his widow that in the days before he died, there were warning signs.

"I am now more educated about those signs, but they were definitely there: the hopelessness, the change of behavior, isolation," Talinda Bennington told CNN during an interview with CNN's Anderson Cooper during the CNN Town Hall, "Finding Hope: Battling America's Suicide Crisis."

But, Bennington explained, these behaviors weren't uncommon for her husband, a father of six who had battled depression for a long time.

"That was all part of our daily life," she said. "Sometimes, some signs were there more than others. Sometimes, they weren't there at all."

In the days before he died, Chester Bennington had seemed happy and well, his widow recalled.

Indeed, the night before the 41-year-old took his own life at the couple's California home, "he was (at) his best," she said.

"We were on a family vacation, and he decided to go back home to do a television commercial," his widow recalled. "This was not a time where we or any of our family suspected this to happen, which is terrifying. ... We thought everything was OK."

In retrospect, though, Talinda Bennington realizes her husband was in a dark place.

Bennington emphasized that there is no simple explanation for her husband's struggles over the years, attributing his depression to a confluence of factors.

The musician was open about his troubled life, including his experience battling addictions to cocaine and methamphetamine. He also said he suffered sexual abuse as a child.

"If we can find good coping mechanisms, if we have people we trust that we can talk to, that helps us to make better choices for ourselves," she said. "And my husband didn't have that in a lot of situations."

Witnessing her husband's suffering made Bennington determined to educate herself on the causes and effects of depression, she told Cooper.

"I don't suffer from depression," she said. "I never have.

"Watching my husband go through it, I had no idea. I could not relate."