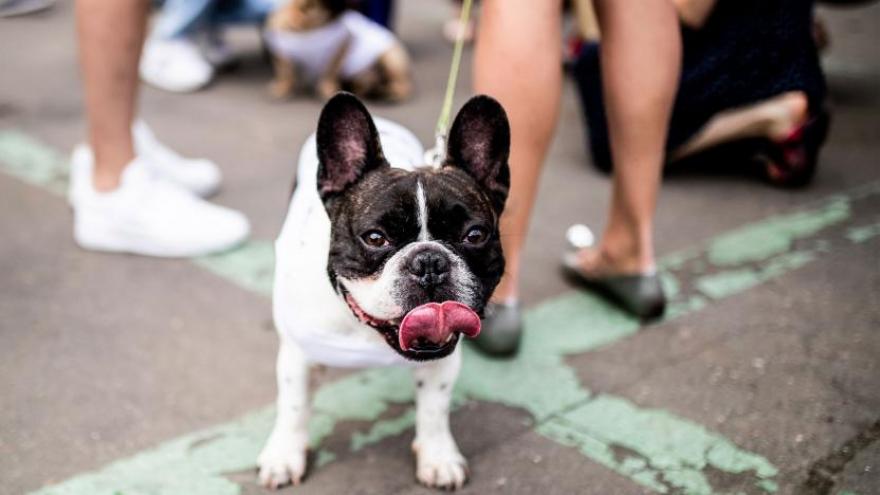 A parade of French Bulldogs as part of the Day of France festival held at Moscow's Flacon Design Factory creative cluster.

(CNN) -- The portly and petite French bulldog is an ideal canine companion: They don't bark much, prefer snuggles and indoor play to long walks or games of catch and retain their puppy-like stature all their lives.

Their popularity makes them a frequent target for theft, though.

Perhaps the highest-profile case of French bulldog theft happened this week, when two of Lady Gaga's dogs were stolen after unknown assailants shot her dog walker in the chest.

"This is a particularly horrific incident," dog trainer Victoria Stilwell told HLN's Elizabeth Prann on Friday. "But unfortunately, dog theft is not."

French bulldogs, the fourth most popular dog breed in the US (and the smallest breed among the top five), are often preyed upon by dognappers for the same qualities that make them such beloved pets. The best way to keep them safe is to stay vigilant and within your sight, canine experts say.

They're in high demand

French bulldogs are one of the "it" breeds of the 21st century: Their adorably flat faces and affectionate attitudes endear them to owners and breed admirers.

But the higher their demand, the more likely theft becomes, said Brandi Hunter, vice president of public relations and communications at the American Kennel Club.

"Smaller breeds are more appealing for theft, and French bulldogs are wildly popular right now," Hunter told CNN. "The demand for the breed is higher than the supply so they are often a more targeted breed."

They're small and easy to steal

The breed's size makes it a relatively easy target. According to the AKC, Frenchies can weigh up to 28 pounds and don't grow more than a foot in height.

"They're just easy to access; they're easy to grab," Stillwell said. "So if people leave their dogs of any breed in the front of backyard, unattended, that's an easy grab."

Because the breed is so in demand, French bulldog puppies can fetch between $1,500 and $5,000 or even higher, Hunter said -- a restrictive price range for many prospective French bulldog owners.

"Thieves generally know how popular these dogs are, what they cost, and how much people are willing to pay for them," Hunter said.

"If they're not spayed or neutered, the will make good breeding stock, so people can make money for their puppies," she said.

How to keep your Frenchie safe

Watch your dog. Dogs are easier targets when they're left alone, even if they're just in your yard. Keep an eye on them at all times, Hunter said.

Microchip your pup. If your dog becomes lost or is stolen, your pet's microchip can tell the people who find it or the veterinarian who treats it that it belongs to you, Stilwell said. It's also a good idea to keep an ID tag on your dog.

Spray or neuter it. To prevent a stolen dog from being used to breed, spray or neuter your dog when it's old enough, Stilwell said.

Use social media carefully. Try not to disclose any identifying information on your social media platforms, Hunter suggests -- people who prey on French bulldogs could find your dog this way.