There's a sweet reason this house is painted like a Van Gogh, but not everyone is a fan 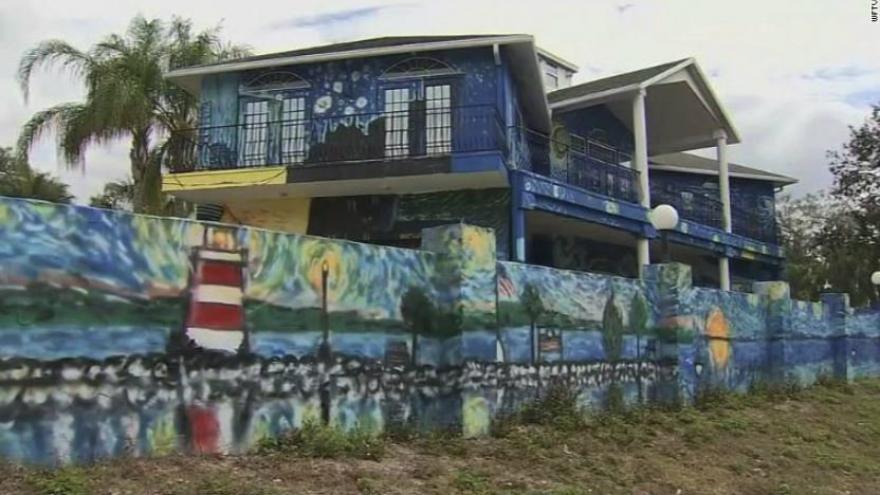 (CNN) -- What do you see when you look at this house, covered in the blue and yellow swirls of Vincent Van Gogh's "The Starry Night?" Is it art, or an eyesore? A neighborhood gem, or a neighborhood nightmare?

The Mount Dora, Florida, couple who live there say it's an important part of their family and their community. They also are facing a $100-a-day fine to keep it.

Nancy Nemhauser says her adult son, who has autism, lives at home and loves the painting, which covers parts of the house's exterior and is preceded by a full mural on a nearby wall that the family commissioned and was completed in 2017.

Her son's happiness is a key reason Nemhauser says her family is fighting the city of Mount Dora over the mural.

She told NBC's "Today" that the colorful house and mural might help her son if he ever wandered away from home and got lost.

According to CNN affiliate WFTV, city officials first considered the mural to be graffiti, then reclassified it as a sign. That's a zoning violation in a residential area, so last September the city asked the family to paint over the mural with a solid color. The family refused, and has been facing fines ever since -- to the tune of at least $3,100.

This week, a special magistrate judge ruled that Mount Dora, in central Florida north of Orlando, can continue to fine the family $100 a day. Nemhauser and her husband have retained an attorney and plan to continue to fight the city's decision.

"There's art on other homes, other buildings in the city, in the residential district as well. So why are we being chastised for ours when we did what we were told we had to do to keep the wall that our son loves?" Nemhauser told WFTV.

CNN has reached out to the family's attorney and the city of Mount Dora for comment.

The actual Van Gogh painting was completed in 1889 and is considered one of the most famous artworks in history. It hangs in New York's Museum of Modern Art.