These 20 states will raise their minimum wage by January 1 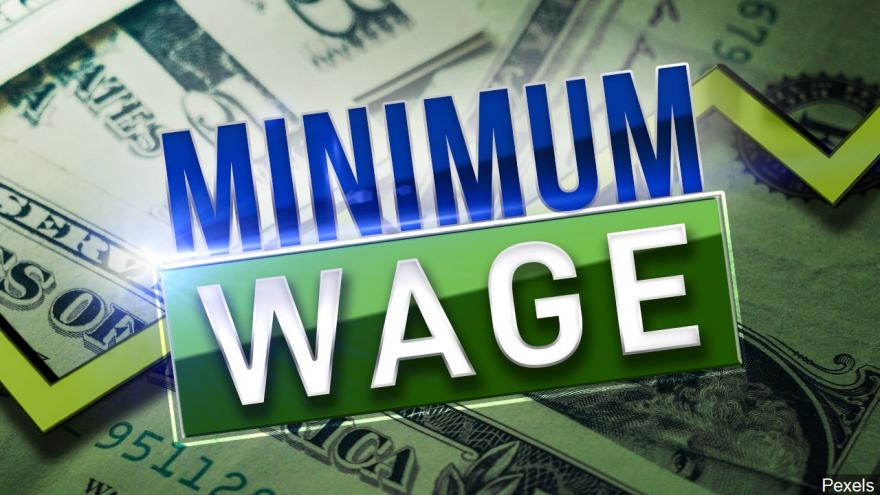 (CNN) -- Come Friday, many low-wage workers across the US are getting a pay bump.

Twenty states are raising their minimum wage rates — some by pennies, others by a dollar or more — as part of previously-scheduled efforts to adjust for cost-of-living gains or to ratchet up toward goals like $15-an-hour minimum pay.

In New Mexico, the minimum wage will increase to $10.50, up $1.50 from the current $9 wage. And in California, the rate for employers with 26 workers or more will rise from $13 to $14 an hour, the highest state-wide baseline in the country. In Minnesota, the gain is just 8 cents, to a $10.08 hourly rate for large employers. (Scroll down to see a full list of the changes).

Although some of the new state increases were set in place years before, they carry additional significance now, when low-wage workers have been hit particularly hard by the coronavirus pandemic.

"We have lots of low-wage, service workers who are working through the Covid crisis, many of whom are in jobs with a greater risk of transmission," said Ken Jacobs, chair of the Center for Labor Research and Education at the University of California-Berkeley. "This will be a very welcome boost for them. As well, a lot of families are struggling right now in this crisis."

Workers' needs are greater during an economic downturn because, with so many people jobless, they have little bargaining power and employers are able to keep wages low, said Ben Zipperer, an economist at the Economic Policy Institute, a progressive think tank.

Minimum wage workers are typically younger and predominantly have jobs in the leisure and hospitality sector, federal data show. These service-heavy businesses have been rocked throughout the pandemic as public health and safety measures have triggered closures of restaurants, hotels and entertainment venues.

As the pandemic has raged on, housing and food insecurity have risen and incomes have fallen. And it's been lower-wage workers who have suffered the brunt of the economic fallout.

There 19 states will raise their minimum wages on January 1, 2021. New York’s increase will happen on December 31, 2020. Here are the new minimum wage rates by state:

At the same time, some legislators and business organizations have called for a pause on scheduled minimum wage hikes, citing the burden on small businesses that are already struggling.

In New York, members of the state Senate Republican Conference had urged Governor Andrew Cuomo to stop the planned increases slated to go into effect Thursday.

"We do not want our small businesses to make the difficult choice of laying off workers or closing their doors because this becomes the final straw during the financial fragility of the pandemic," Senate Republican Leader Rob Ortt said in a statement in early December.

Cuomo's administration later released a report concluding that the state's labor market recovery is "not likely to be substantially harmed" by the minimum wage increases, and rather the pace and distribution of vaccines likely will have a far greater effect on the job market.

"New York is implementing the minimum wage gradually over many years, not all in one fell swoop," Evercore ISI economist Ernie Tedeschi told CNN Business via email. "Moreover, and this is the most important point, the schedule for New York's minimum wage increases has been known for years now, and businesses have been planning for and expecting the hikes this whole time."

Starting Thursday, the minimum hourly wage in the state will increase 70 cents to $12.50 an hour. The minimum wage rates in suburban Long Island and Westchester County will also rise to $14 per hour from $13 an hour.(The minimum was already set at $15 in New York City).

Some states will have to wait

In Michigan, the pandemic likely will scuttle efforts to increase the state minimum wage. There, a state law prohibits scheduled minimum wage increases when the state's annual unemployment rate is above 8.5%.

Although the jobless rate has recently improved in Michigan, it averaged 10.2% from January through October, so it's "highly unlikely" the annual averagewill drop below the 8.5% threshold,the state's Bureau of Employment Relations said in a press release.The state's minimum wage will stay at $9.65 versus rising to $9.87.

For the 20 states that will raise their minimum wages, the effects ultimately should be more positive than negative, the EPI's Zipperer said.

"Redistributing money towards the lowest paid workers is smart policy, because they will spend it," he said. "This will help the shortfall in consumer demand our economy faces right now."

And public support appears to be growing for minimum wage increases. On Election Day, voters in Florida passed a measure to raise the state's minimum wage to $15 per hour by 2026 — up from $8.56 this year. A Public Agenda/USA Today/Ipsos survey released in September showed increases in public support for a federal minimum wage hike.

Most of the minimum wage gains have occurred at a state, city or business level and have included companies such as Target and Amazon offering $15-an-hour pay.