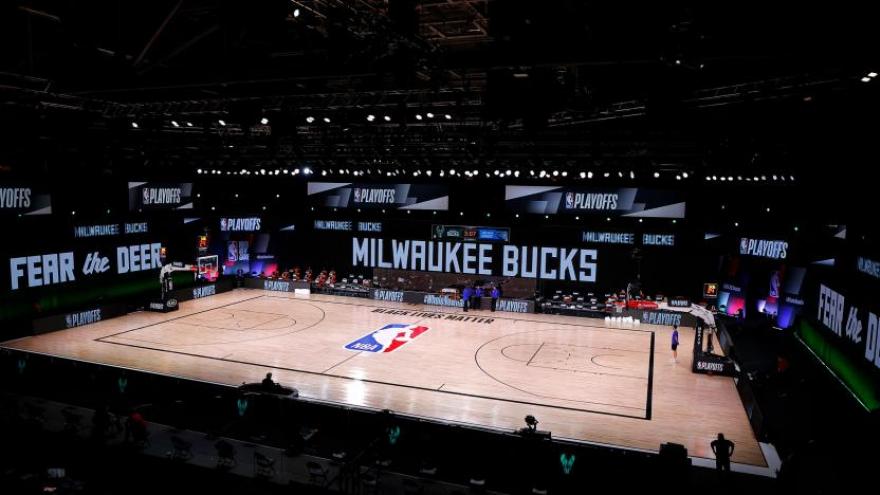 The Milwaukee Bucks started a trend when they decided not to play their NBA playoff game.

(CNN) -- Across the sports world, athletes took a stand for Black Lives Matter on Wednesday night by holding an unprecedented wildcat strike and refusing to play their regularly scheduled games.

The decision started with the NBA's Milwaukee Bucks and stemmed from the police killing of Jacob Blake in Kenosha, Wisconsin, on Sunday. The stand quickly spread across a number of sports and even into the broadcast booth, where TNT's "Inside the NBA" analyst Kenny Smith took off his mic and walked off stage.

Here's a look at the teams and athletes who pulled back in order to have their voices be heard.

The Milwaukee Bucks did not emerge from their locker room before the scheduled tip at 4 p.m. as they decided to refuse to play their playoff game.

Soon after, the NBA announced it would postpone Game 5 of three different playoff series -- the Bucks vs. Orlando Magic, Houston Rockets vs. Oklahoma City Thunder and Los Angeles Lakers vs. Portland Trail Blazers.

The postponed games have not yet been rescheduled, and the entire NBA playoffs now hangs in the balance.

Strikes are banned under the NBA's collective bargaining agreement, which means the Bucks players broke their own contract in order to protest racial injustice and police violence.

In a statement issued on Wednesday afternoon, the Bucks players said they are "calling for justice for Jacob Blake and demand the officers be held accountable. "

"The past four months have shed a light on the ongoing racial injustices facing our African American communities. Citizens around the country have used their voices and platforms to speak out against these wrongdoings," they said in a statement.

"Despite the overwhelming plea for change, there has been no action, so our focus today cannot be on basketball."

The Los Angeles Lakers also offered a statement in support of the players' decision.

"Eighty percent of NBA players are Black men. We cannot love them for the joy and entertainment that they bring to the world, yet sit in silence and fail to use our platforms and resources to amplify their voices when they demand the justice and equality that America has promised us all, but denied Black people for too long," the Lakers said.

Representing the six teams slated to play on Wednesday, Atlanta Dream player Elizabeth Williams announced that WNBA players were standing in solidarity with "our brothers in the NBA" and also would not play.

The ESPN2 broadcast showed players from the six teams scheduled to take the court in locked arms and kneeling while wearing shirts spelling out Jacob Blake's name.

The WNBA announced that the three games scheduled for the evening had been postponed.

"Given the pain in the communities of Wisconsin and beyond following the shooting of Jacob Blake, we respect the decisions of a number of players not to play tonight," a league statement says. "Major League Baseball remains united for change in our society and we will be allies in the fight to end racism and injustice."

The Reds and Brewers were to play in Milwaukee.

"The players from the Brewers and Reds have decided to not play tonight's baseball game," they said in a joint statement. "With our community and our nation in such pain, we wanted to draw as much attention to the issues that really matter, especially racial injustice and systemic oppression."

The Mariners also unanimously voted to not play their scheduled game against the Padres, Mariners second baseman Dee Gordon said in a tweet.

"There are serious issues in this country," Gordon wrote. "For me, and for many of my teammates, the injustices, violence, death and systemic racism is deeply personal. This is impacting not only my community, but very directly my family and friends. Our team voted unanimously not to play tonight"

"The entire Major League Soccer family unequivocally condemns racism and has always stood for equality, but we need to do more to take tangible steps to impact change," MLS said. "We will continue to work without players, our clubs and the broader soccer community to harness our collective power to fight for equality and social justice."

Tennis superstar Naomi Osaka announced on social media that she will not play in the Western & Southern Open semifinals on Thursday.

"Watching the continued genocide of Black people at the hand of the police is honestly making me sick to my stomach," she wrote.

Before the start of Game 3 of the second-round series between the Tampa Bay Lightning and Boston Bruins, there was a moment of reflection for racism in response to the Blake shooting.