These businesses are making more money because Americans are staying home 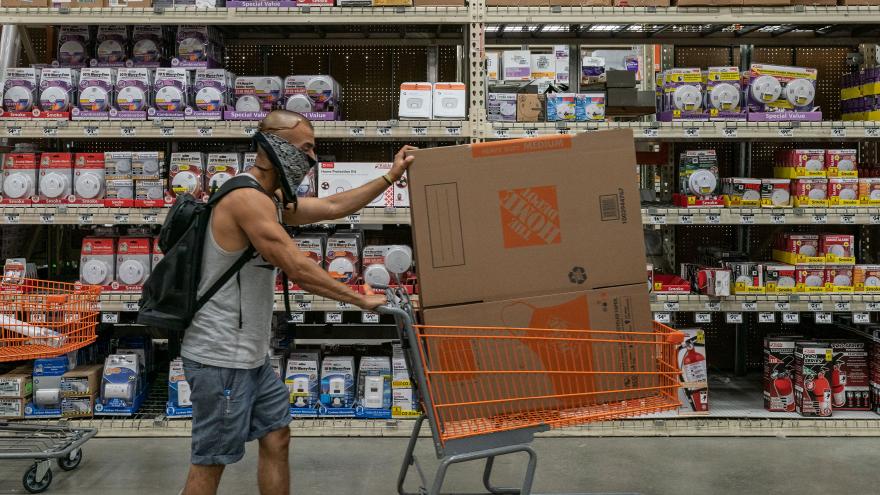 (CNN) -- Although the pandemic brought about one of the steepest economic contractions in history, home improvement businesses have fared well through the downturn.

Companies that aim to make home a bit cozier, or a bit more functional, are benefiting from Americans having nothing better to do -- and few other places to go.

We looked at several economic indicators to illustrate how central home has become to American life in 2020. Here are few:

Although huge swaths of the US economy are getting crushed by the pandemic, housing remains a bright spot. Building permits and housing starts both surged in July, according to the US government. Sales of previously owned homes jumped 20.7% from May to June, a new record, according to the National Association of Realtors.

Many city dwellers are flocking to the suburbs — partly because of Covid-19, but also because mortgage rates are at an all-time low. Whatever the reason, new homes mean new projects, which is good news for stores like Lowe's and Home Depot, both of which were deemed "essential" in the early days of the lockdown.

Lowe's recently reported a 30% jump in revenue for the second quarter, including a 135% surge in online sales. Home Depot had a similarly busy summer, with a 23% revenue jump in the quarter that ended in July.

Target reported its best quarter ever for sales.

But "nonessential" retailers that were forced to close, such as Bed Bath & Beyond and Pier 1, are on life support -- or went bankrupt. BB&B this week announced it was cutting 2,800 jobs. The company said that significantly reducing the number corporate employees and retail workers will help save $150 million in annual pretax cost savings.

As working from home becomes a more permanent situation for millions of workers, the quest to create a home office space has intensified. For some, that means taking the office to the backyard.

Shed manufacturers have been running a brisk business since the pandemic started, said Mike Koenig, president and co-founder of Studio Shed, a Boulder, Colorado-based firm that sells prefabricated backyard buildings.

"A lot of people were already working from home and California and Washington had already shut down," said Koenig. After that, the orders started coming in, particularly of its Signature Series model that ranges from 64 to 240 square feet, and starts at $10,500.

Home is where the Peloton is

With most gyms closed, people have been flocking to at-home fitness classes, and that's been a boon for Peloton. The stationary bike, and its stock. Shares are up more than 130% this year thanks to a surge in sales for its bikes and treadmills, which have garnered such ardent fans that it's sometimes called "cultish."

Even Apple is reportedly getting in on the home fitness market.

Household robotic vacuum Roomba is on a tear because people are tired of staring at dust bunnies all day. iRobot, Roomba's parent company, is reaping the benefits. The company's stock is up almost 47% this year. iRobot is capitalizing on the surge in popularity. In August, the company announced that it's giving its robots a "genius" software update.