These relief programs are expiring unless Congress acts 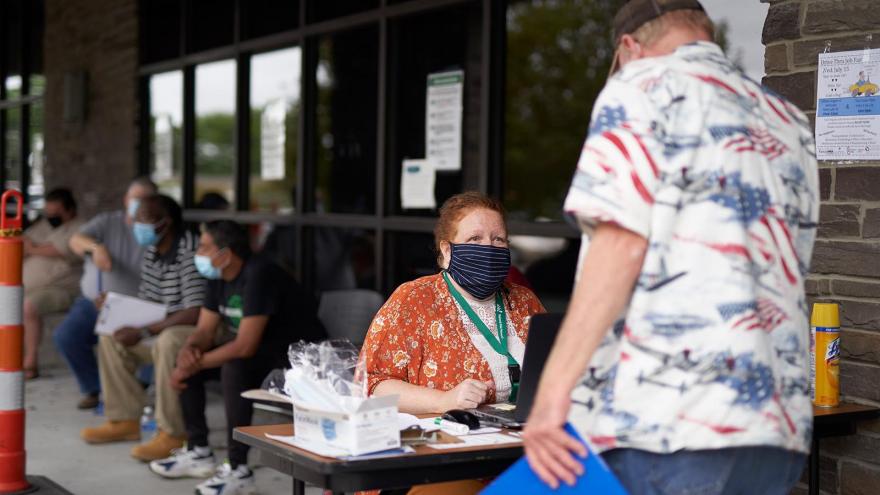 Three key relief programs have either expired or are on the verge of ending. The image shows Vickie Gregorio with the Heartland Workforce Solutions talking to a jobseeker outside the workforce office in Omaha, Neb., Wednesday, July 15, 2020.

(CNN) -- When the coronavirus pandemic first swept through the nation in March, Congress swiftly stepped in to help Americans and businesses stay afloat by funneling hundreds of billions of dollars to them.

But now three key relief programs have either expired or are on the verge of ending. And lawmakers are deeply split over what to do next, even as a renewed surge of cases threatens to topple the nascent economic recovery.

Senate Republicans rolled out a $1 trillion relief package earlier this week, but it is deeply at odds with what House Democrats proposed in legislation they passed in May.

The program that has provided millions of jobless Americans with an extra $600 a week in unemployment benefits formally expires Friday. But most of those in the program have already received their last enhanced payments, which covered the week ending last weekend.

This measure was one of three major expansions of the nation's unemployment program in the $2 trillion CARES Act. It has not only helped the jobless pay for housing and food, but it has also propped up the economy.

However, when combined with state benefits, the $600 boost has also provided more money to about two-thirds of the unemployed than they received in wages, according to a University of Chicago estimate. That has led to concerns among Republicans and employers that it's keeping some of the jobless on the sidelines and delaying the economic recovery.

That's a main reason why the GOP bill calls for cutting the weekly payment to $200 until states implement a system that replaces roughly 70% of laid-off workers' wages. The supplement would expire December 31.

But Democrats say the economy is still weak and the jobless still need assistance. The House bill would continue the $600 enhancement into early next year.

Housing instability has been a looming crisis against the backdrop of the pandemic as the economic fallout coupled with the absence of a broad federal response has left renters vulnerable.

On Sunday, Larry Kudlow, the White House chief economic adviser, said the eviction moratorium would be extended, but that has yet to be seen. Meanwhile, millions of Americans continue to struggle with monthly rent payments amid the relentless pandemic.

As many as 23 million renters are at risk of eviction by September 30, according to a report by the Covid-19 Eviction Defense Project and the Aspen Institute Financial Security Program. Those most vulnerable to getting evicted are undocumented individuals, low-income renters and renters of color.

Congress has provided about $660 billion in forgivable loans to small businesses through the Paycheck Protection Program. It helped keep these businesses open and their workers employed.

The effort, which still has $130 billion in remaining funds, is set to expire on August 8.

In the bill they rolled out this week, Senate Republicans would repurpose that money, add $90 billion and allow businesses to take out second loans. Businesses have to have fewer than 300 employees and be able to prove 50% reductions in revenues compared with a comparable period before the outbreak.

The proposal also reduces the amount that a borrower can receive from $10 million to $2 million and gives businesses more flexibility on how they spend the money. The loan amount is meant to cover only two-and-a-half months' worth of costs.

Plus, the bill creates a separate low-interest, long-term loan program for seasonal businesses or those in low-income communities.

The legislation would extend the deadline to apply to December 31, according to Thomas Wade, director of financial services policy at the American Action Forum, a right-leaning think tank.

House Democrats didn't include additional money for the Paycheck Protection Program in their relief bill, but they pushed back the deadline to apply for a loan until the end of the year. Some Democrats have said they'd support expanding the program now that applications have slowed.

The House bill included $10 billion for a separate loan program for small businesses, known as Economic Injury Disaster Loans. The program ran out of money last week, using up all $20 billion already allocated by Congress for advance loans.