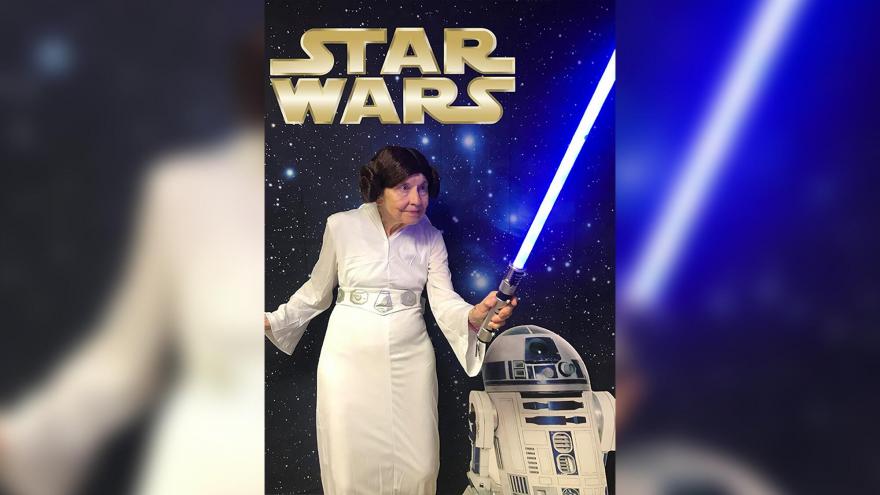 Proceeds from the community's calendar sales go toward Alzheimer's research.

(CNN) -- With each flash of the camera, these beautiful people "smize" with their eyes and work their best angles.

Decked out in colorful wigs, makeup and costumes, the mature models are recreating iconic movie scenes and characters for their annual calendar. The glitzy group are all seniors from a Washington state assisted living community, and proceeds from sales of the calendar go to the Alzheimer's Association.

"All of the money we raise goes to them. We really believe in it. We deal with it (Alzheimer's disease) here every day," Marketing and Community Relations Director Jennifer Angell said. "It's very close to our hearts."

Angell, an amateur photographer whose last name is pronounced "angel," came up with the idea to transform everyday grandmas and grandpas into iconic entertainers after noticing an uncanny resemblance between one of her seniors and Hollywood legend Katherine Hepburn.

She took the lookalike's photo and started casting other residents at the Village Concepts Communities -- Spiritwood at Pine Lake facility.

"I thought, 'well, let's do all of them. I'll start buying the costumes,' and we put them into a calendar situation," Angell told CNN.

When the first box of calendars hit the shelves three years ago, Angell says the community sold more than 150. "They were going really quick and I had to keep ordering and ordering," she exclaimed. "The seniors were so proud."

The photo project is open to all members of the Spiritwood Assisted Living community including those in memory care. Members living with Alzheimer's or dementia get special time and care to take on their role. On average, Angell said, each photo requires a minimum of two hours.

"They may not remember your name, but if you interact with them enough and show constant friendship, they trust you and a huge bond is created."

Angell said each senior gets involved in the creative process to the best of their ability. Production planning usually begins with Angell dropping by one of the seniors' social hubs -- the dining room.

There, Angell and her supervisor can use their creative eyes to scout fresh faces for new roles.

"We actually kind of have a roundtable and talk about what we're going to do. They (the residents) have a big voice in everything too."

After the photo shoots, the seniors parade through the dining room in full costume to celebrate their role in the calendar. "They feel like they're special," said Angell.

From best friends to Blues Brothers

Kip Steele and his best friend Jack Guptil posed together as the Blues Brothers.

Prior to retirement, Steele was a businessman and and traveled to more than 70 countries. In his spare time, he loved to play hockey and go dancing. "I am a lover of life," he said. So, when Angell pulled out the costumes, the grandfather of four was ready for his close-up.

For Steele, who now uses a wheelchair, his portrait holds a deeper meaning beyond his appearance in the calendar. It is a creative chance to express his desire to keep living. "That sort of gave me a lift spiritually," he said.

After their photo shoot, Kip and Jack -- still clad as the Blues Brothers -- made their lunchroom rounds, egged on by applause, cheers and good-natured jeers.

For Steele, his community is a loving family.

"We got a lot of applause, smiles and laughter. I think that was the essence of doing the whole thing anyway," he said.

Confidence at any age

Steele said his community gives him the confidence to try new things, like popping wheelies over curbs. He also loves art class. Steele is clear though; his big goal is to get out of the wheelchair and walk on his own. But in the meantime, he's working on a final goal.

"You know what the last thing on my bucket list is?" he asked with a laugh.

While the community's calendar project and other fundraisers yielded $14,000 for the Alzheimer's Association, the project's full value for the residents is immeasurable.

"As seniors, they lose their feeling of importance sometimes," said Angell. "They're so willing to help me and they're so excited about being in the spotlight."

To date more than 40 residents have posed for photos with 300 calendars sold. The oldest participant is a thriving 102-year-old model returning for her second feature this year.

Angell and her supervisor are planning their next photo campaign which will be release in October.

Due to the coronavirus pandemic, Angell is planning less "group shots" and more individual portraits to follow social-distancing guidelines. She hopes the calendar will include classic recreations of Willie Nelson, Eleanor Roosevelt, Sonny and Cher and Winston Churchill.

Although photography in a pandemic poses unique challenges for her mature models, Angell and team are determined to do whatever it takes to make sure her seniors shine -- and do so safely.

"I feel like they're my family. There isn't anything I wouldn't do for them."