They survived New Zealand's volcano eruption, then went back to rescue others 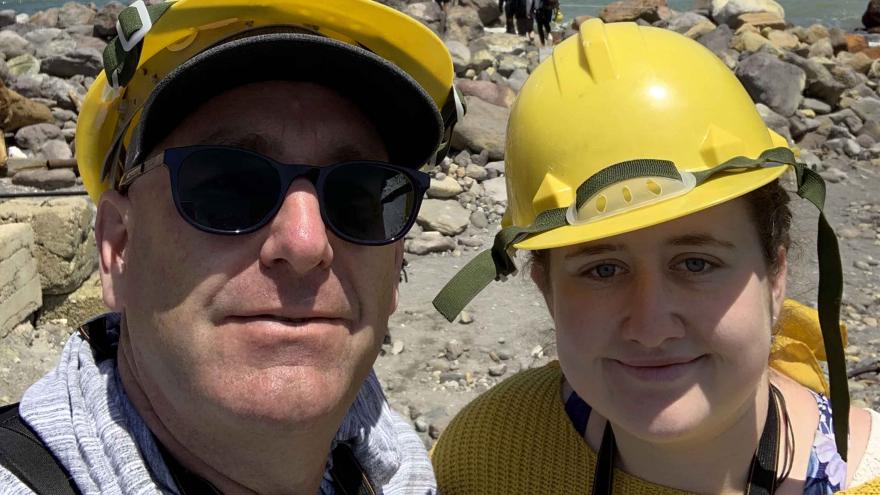 (CNN) -- Geoff Hopkins says he will never forget the cries as the survivors of the White Island volcano eruption were pulled aboard the boat.

Screaming in pain, with skin peeling from their faces and limbs scorched by steam and ash, the survivors were transferred from a dinghy bobbing in the water off the small island.

There was "lots of screaming. Panicked screaming," he says, recalling the injured shouting: "'Get me out of here. I'm burning. I'm burning.'"

The tour boat Hopkins was on had left White Island, off the coast of Whakatane, New Zealand, shortly before the volcano erupted on Monday. Forty-seven people were on the island at the time of the blast. Eight people have so far been confirmed dead.

In the moments immediately after the eruption, the boat's crew made the decision to turn around and help those people left behind.

"We (could) see there's people in the water. There's people swimming off the island," Hopkins, a New Zealand pastor who was on the vessel for a day trip with his daughter Lillani, told CNN.

The 23 people who were brought on board the boat had "horrific burns," he said.

"A lot of people were in shorts, T-shirts, so their faces, their arms, their hands, their legs (were burned)," Hopkins added. "Skin falling off, and hanging from chins. From fingers. From elbows."

The vessel, owned by a company called White Island Tours, was more accustomed to running sightseeing trips than being used as a floating triage center, but as more and more injured people were brought to the boat by dinghies, the crew made a desperate appeal for any doctors on board to come forward.

Hopkins and his daughter are both trained in first aid, and they stepped up to help as the situation unfolded.

He recalled one crew member's expression: "The look of horror on her face as she said, 'We need all the help we can get.'"

As the pair turned from tourists to first responders, he said they focused on those who were most seriously injured.

Of all the people that Hopkins helped, he says one couple has stuck in his mind the most.

US newlyweds Matthew Urey, 36, and Lauren Barham, 32, from Richmond, Virginia, were on the island during a day trip from their honeymoon cruise on the Royal Caribbean vessel Ovation of the Seas.

Their love for each other touched him, and he prayed for them both to survive, Hopkins said.

"When she says 'I don't think I'm gonna make it,' you rebuke that. 'You are gonna make it. You're strong. You're a fighter. You're gonna get through this. You've got a future.'"

Urey and Barham are being treated at two different hospitals, one in Christchurch and one in Auckland.

New Zealand has four specialist burns units, all of which are now full in the wake of the White Island disaster.

"It's absolutely soul-crushing," Janet Urey, Matthew's mother, told CNN via FaceTime. "It's my worst nightmare. But on the other hand I'm trying to focus on the positive."

"I was lucky enough to be notified by Matt that's he was okay," she said. "There were so many families that didn't get any word."

"Minutes could have been life or death for them," Urey added.

"33% of his body is burned," she said. "Many of them are full thickness burns, which are pretty severe. They're going to require plastic surgery, skin grafting."

It was a painful end to what was supposed to be a dream trip.

"It was his trip of a lifetime," she said. "He put so much work and effort and time into planning this to make it just what they wanted. This would be the perfect honeymoon."

CNN also spoke via text message to Barbara Barham, Lauren's mother. She is also traveling to New Zealand to be with her daughter.

"We don't know how she is yet," Barham said. "We don't think she is conscious."

Both mothers are now making the grueling multi-leg trip from the US to New Zealand, with no idea of what awaits them on their arrival.

Correction: This story has been updated to attribute the quote "We need all the help we can get" to a White Island Tours crew member.