They were trying to save a species. Instead, scientists created a fish that's part sturgeon, part paddlefish, all accident 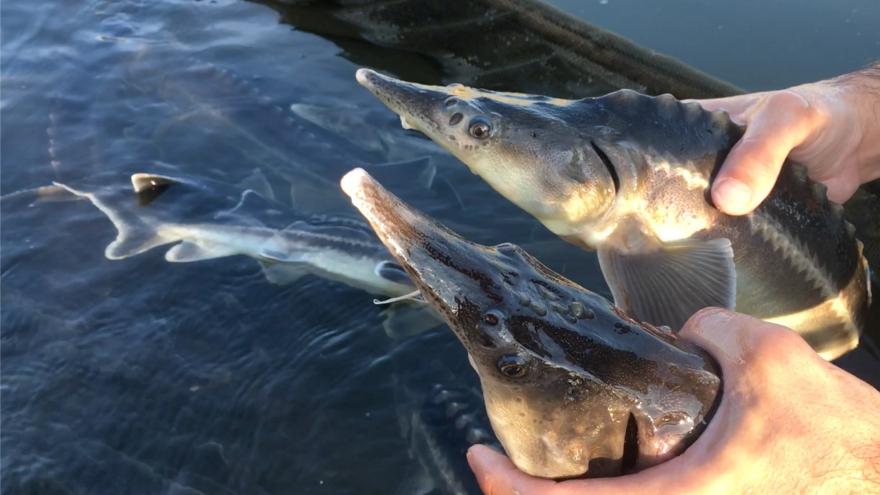 Originally Published: 21 JUL 20 19:00 ET
By Scottie Andrew, CNN
(CNN) -- A group of Hungarian aquatic scientists was looking for ways to save the fish responsible for some of the world's finest caviar from extinction.

Instead, they made a Frankenfish.

But their accidental hybrid, a fish that's part American paddlefish and part Russian sturgeon, could benefit fish farming and the industry's carbon footprint. And on their own, the fish are a marvel of biology.

Though they haven't been formally named yet, fellow fishery researchers have given them the moniker "sturddlefish."

The "sturddlefish" study appeared this month in the scientific journal Genes.

The initial goal of the study was to encourage the critically endangered sturgeon to reproduce asexually. That isn't quite how it went.

The Russian sturgeon, instead, hybridized with the American paddlefish, the first time the two have ever hybridized successfully in captivity. The paddlefish was originally meant to provide sperm -- not its DNA -- to help the sturgeon reproduce on its own.

The sturgeon isn't so genetically different from paddlefish -- they belong to the same group, Acipenseriformes. According to the US Fish and Wildlife Service, sturgeon and paddlefish both provide tasty caviar.

But they weren't supposed to hybridize. Previous hybridization attempts between American paddlefish and other sturgeons hadn't worked, the authors wrote. And for their evolutionary similarities, the two have vastly different feeding habits, preferred habitats and physical characteristics.

Plus, the two fish would never have met naturally. The American paddlefish dwells in the Mississippi River Basin, and the Russian sturgeon inhabits Russian rivers. The Russian sturgeon is considered extremely valuable for its roe, or eggs. Both species are threatened by shrinking habitats and overfishing.

While the caviar that comes from sturgeons is a delicacy, the fish themselves are exceedingly rare in Russian waters. That's why the researchers, all from Hungary, wanted to encourage the sturgeon to reproduce through gynogenesis, which uses the treated sperm of another species to coax the specimen's eggs to develop.

But in gynogenesis, the DNA of the sperm specimen isn't supposed to transfer to the offspring.

What the hybrids could do next

Both hybrids resembled the sturgeon, with its ridged back and short nose, though one of them did have a pointier snout reminiscent of its paddlefish parent.

"The how and why are still open questions," said lead author Jenő Káldy, an aquaculture researcher at Hungary's National Agricultural Research and Innovation Centre's Research Institute for Fisheries and Aquaculture. The two likely hybridized because the sturgeon was slow to evolve. This means there are likely fewer differences between its morphology and genes and those of other species, including, apparently, the American paddlefish.

Sturgeon hybrids are typically used in aquaculture and provide around 20% of global caviar production, the researchers said. But if the hybrids adopt the paddlefish parents' habits and learn to feed on plankton and other microscopic organisms instead of the more discerning sturgeon's diet of crustaceans and larger fare, they may play "an important role in adapting pond aquaculture to the challenges of climate change," the authors wrote.

Put simply, if these "sturddlefish" end up not needing to be fed and instead can rely on natural plankton in their habitats, the carbon emissions that would've resulted from feeding them will shrink. Paired with their high market value, the accidental hybrids could end up being more valuable than their creators imagined.

As for saving the endangered sturgeon, the study "has taken us closer to our aims," Káldy said.

For now, though, the hybrids live peacefully at a research facility in Hungary, where there's no risk they'll invade non-native waters.