Thieves in California are stealing scarce water amid extreme drought, 'devastating' some communities 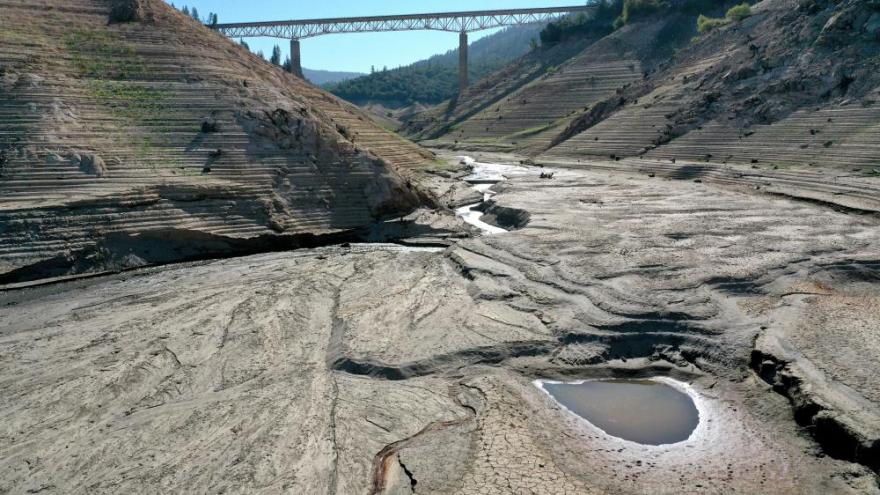 In an aerial view, low water levels are visible at Lake Oroville on July 22 in Oroville, California. As the extreme drought emergency continues in California, thieves are making off with billions of gallons of water, tapping into fire hydrants, rivers, and even small family homes and farms.

(CNN) -- As an extreme drought grips California, making water increasingly scarce, thieves are making off with billions of gallons of the precious resource, tapping into fire hydrants, rivers, and even small family homes and farms.

State and local officials say water theft is a long running-issue, but the intensifying drought has driven the thefts to record levels as reservoirs dry up and bandits make off with stolen water, often to cultivate the growth of illegal marijuana crops.

"Water stealing has never been more severe," said John Nores, former head of the California Department of Fish and Wildlife Marijuana Enforcement Team. The agency has been fighting the thefts for years, usually in rural areas of the parched state, that have been "devastating" communities, he said.

At least 1.8 billion gallons of water are estimated to have been stolen across the state since 2013, impacting legitimate farming operations, drinking water sources, Native American tribes and small communities, Nores said.

How thieves are getting their hands on water

Officials say the thieves are getting their hands on water by breaking into secure water stations, drilling into water lines, tapping into fire hydrants and using violence and threats against farmers, making off with truckloads of water for their crops under cover of darkness.

The issue has become so severe that some communities have been forced to place locks on fire hydrants or remove them altogether.

"The amount of water that is being stolen to water those (marijuana) plants has a huge impact on our local aquifers," Siskiyou County Sheriff Jeremiah LaRue told CNN. His rural county in the northernmost part of the state is one of the hardest hit by thieves, where many residents rely on well water.

Yvonne West, director of the State Water Resources Control Board's Office of Enforcement, told CNN that the board has recently received an "uptick in complaints" of stolen water. It is a "local problem" in smaller communities, West said.

The county has seen up to 18 water main breaks, forcing the waterworks department to spend about a half-million dollars responding to the incidents, Saraiya said.

As California enters its hottest and driest stretch of the year, which forces municipalities to increasingly restrict water use, the thefts are threatening to make a bad situation even more dire.

"As the state enters another potential drought emergency, we need to ensure that this new activity does not further exacerbate water scarcity," Barger said in a statement to CNN.

Officials say they are doing all they can to combat the issue by removing fire hydrants, securing key water sources and implementing greater enforcement to stop would-be thieves from making off with water.

The California Department of Fish and Wildlife MET team has made more than 900 felony arrests of illegal cannabis growers and removed over 400 miles of pipes diverting water from natural streams to man-made dams from 2013 to 2018 during Nores's tenure, he said. Those diversions threaten native fish and wildlife that depend on the water to survive during hot summer months.

After publication of this story, a spokesperson for the California Department of Fish and Wildlife said the department could not verify figures Nores provided on arrests and the amount of water stolen, but added that the department had made 95 arrests last year for illegal marijuana grow operations, many of which had diverted water for their plants

As officials move to crack down on the thieves, the drought -- which now covers every corner of the state -- threatens to create long-term impacts as climate change exacerbates the hot and dry conditions, creating a vicious feedback loop that becomes harder to break.

"All of California has to get used to this concept of water scarcity," West said.

Correction: An earlier version of this article incorrectly referred to John Nores' status with the California Department of Fish and Wildlife Marijuana Enforcement team. He is the former head of the team. The article also misstated the amount of water that was estimated stolen -- it was at least 1.8 billion gallons, according to Nores.