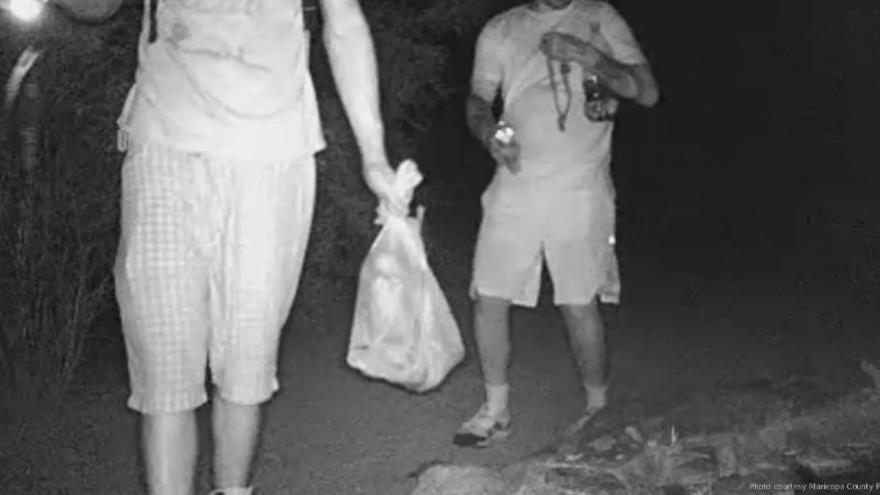 Maricopa County Parks and Recreations released a couple of clips on the Spur Cross Ranch Conservation Area's Facebook page Monday. In one video, you can see at least one toad moving around in what looks like a plastic shopping bag.

Another clip shows a woman putting a toad into the bag.

Those clips are among several that have been turned over to the Maricopa County Sheriff’s Office, according to the Facebook post.

Sonoran Desert toads, also known as Colorado River toads, are among the largest toads native to North America, according to the Arizona-Sonora Desert Museum. They are most active during the summer monsoon and are generally nocturnal.

"Sonoran Desert toads have extremely potent, defensive toxins that are released from several glands ... in the skin," DesertMuseum.org explains. "Animals that harass this species generally are intoxicated through the mouth, nose, or eyes. Dog owners should be cautious: the toxins are strong enough to kill full grown dogs that pick up or mouth the toads."

Those toxins have hallucinogenic properties, which is why members of this species have been victims of "toad licking."

The toads made headlines in 1994 when a 41-year-old teacher was arrested for having the venom of a Desert Sonoran toad in a classroom at a camp where he taught.

According to a New York Times article, Bob Shepard was charged with possessing various drugs but "it is the toad venom, which Mr. Shepard told investigators he had dried and smoked, that has drawn attention in an otherwise routine drug bust."

The article says Shepard caught the toads while camping in Arizona and that he "... was the first person ever arrested for possession of venom from psychedelic toads, which is classified by the Federal Government as a Schedule 1 hallucinogenic, like LSD and mescaline."

As for last week's theft in Cave Creek, it's not clear why the thieves, who appear to be two young men in their late teens or 20s and a woman, took the toads. The three were in the conservation area about two hours after it closed for the night.

That rule involves vandalism and prohibits “[d]estroying, damaging, or removing … any County property or property administered by the Department.” That includes toads and any other "natural resources."

Spur Cross Ranch Conservation Area is in Cave Creek, about an hour north of Phoenix. It's open every day of the year, Sunday-Thursday, 6 a.m.- 8 p.m., and Friday-Saturday, 6 a.m.- 10 p.m.