'Think about the donuts of your day.' A 5-year-old's life affirmations go viral 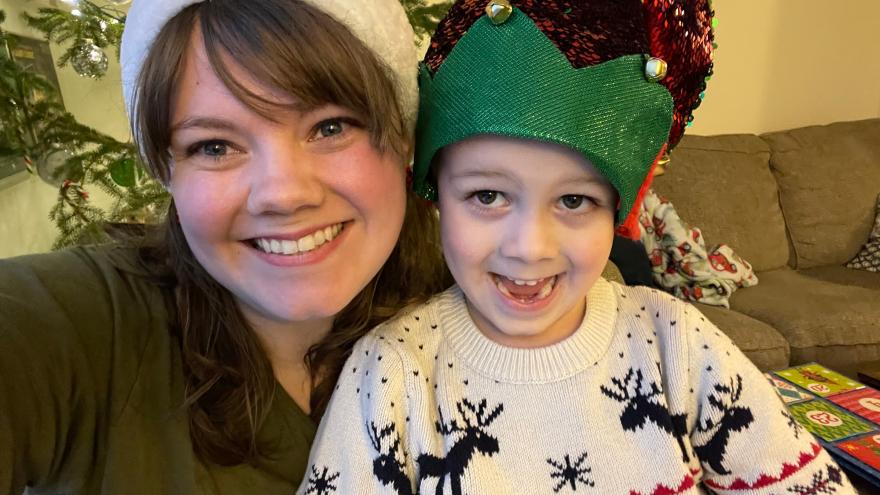 (CNN) -- Not long ago, Gwenyth Todebush began using morning affirmations to help encourage her 5-year-old son, Clark, to get out the door in the morning and off to kindergarten.

The transition to in-person school in Michigan was hard on him, Todebush tells CNN, since the pandemic had kept him home for so many months.

"I would start with trying to have him look forward and say what are things that he is looking forward to so he could think about the future in a positive way rather than dread. Or I'd say after school we can watch TV and have potato chips. And sometimes that's all you need is just TV and potato chips," Todebush explains.

She had no idea how closely he was listening.

"Apparently more of it was sticking than I thought," Todebush says.

When she told her son she was feeling nervous about a parent-teacher conference, Clark spouted out his own list of affirmations, inspired by hers, but with a child's twist.

The following are other "Clark-isms," with Todebush interpreting each one for CNN.)

Clark: "Think about the donuts of your day."

Clark: "You gotta walk big. You gotta mean it. Like Dolly on a dinosaur. Because you got it."

Mom: "He loves Dolly Parton more than me probably, we talk about 'Coat of Many Colors' and how Dolly had some kids that weren't very nice to her. And if she can do it, you can do it. I have no idea where the dinosaur came from, but he's just very pro dinosaur."

Mom: "I love the grammatical construction of brave in this, because if you can be scared of something you can be brave about something. So I was like, yeah, I'm nervous about the meeting. Like, you gotta say that you are brave of this meeting. I don't really know where I smell good came from but I use it all the time now."

Clark: "You gotta say your affirmations in your mouth and your heart."

Mom: "Sometimes, I'll be like take a deep breath and he'll do this one kind of halfhearted one and I'm like, no, you gotta do it again. You gotta give me more than that."

When Todebush first shared some of Clark's affirmations on Twitter, she had just a handful of followers. But after a few days, they caught on -- and people were using them. Her followers keep increasing and one affirmation post garnered 50,000 likes.

Todebush says the majority of the feedback has been people telling her they are now using her son's wise words to get through the day.

"I couldn't resist, I loved the words so much. A glorious mix of wisdom and surrealism. I hope you don't mind and many thanks for sharing," wrote one follower, who made fan art from the quotes.

But there were a few negative comments sent to Todebush too.

"Before I'd never really had any negative interaction. It was just me and other moms. Suddenly there are people judging your parenting. There's a thousand good ones for every bad one but some of the negative ones have been like, 'You should have told him not to worry about you, it's not his job,'" she says, adding, "I get the point. You don't wanna emotionally dump on your kid, but that was really not what this was."

Ultimately, Todebush says, people have been sweet, hanging Clark's messages up up in their cubicles and repeating his phrases.

"It's resonating," she says.

Except for one Clark-ism, that Todebush says came out of left field: "Never put a skunk on a bus."

"Not really sure about that one," she laughs, "Everybody on Twitter is trying to give it some sort of like deeper meaning and I'm like, I think he is just five and that might be literal, but I like that you're getting stuff out of it."