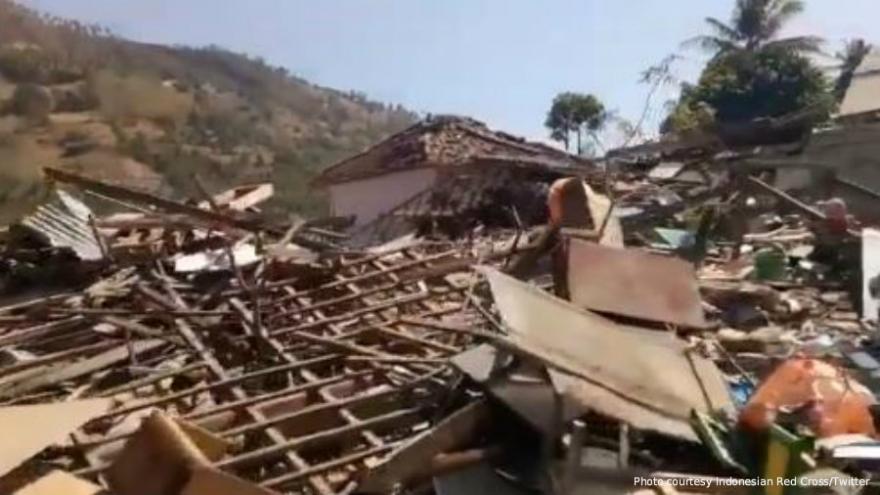 TANJUNG, Indonesia (AP) — The Indonesian island of Lombok was shaken by a third big earthquake in little more than a week Thursday as the official death toll from the most powerful of the quakes topped 300.

The strong aftershock, measured at magnitude 5.9 by the U.S. Geological Survey, caused panic, damage to buildings, landslides and injuries. It was centered in the northwest of the island and didn't have the potential to cause a tsunami, Indonesia's geological agency said.

Videos showed rubble strewn across streets and clouds of dust enveloping buildings. In northern Lombok, some people leaped from their vehicles on a traffic-jammed road while an elderly woman standing in the back of a pickup truck wailed "God is Great." An Associated Press reporter in the provincial capital, Mataram, saw people injured by the quake and a hospital moving patients outside.

"We are taking action as fast as we can to handle this disaster," he said.

Nguroho said in statement that the death toll will continue to rise because rescue workers are still finding victims in the ruins of collapsed buildings and some people who are already buried are not yet included in the official toll.

Grieving relatives were burying their dead and medics tended to people whose broken limbs hadn't yet been treated in the days since the quake. The Red Cross said it was focusing relief efforts on an estimated 20,000 people yet to get any assistance.

In Kopang Daya village in the hard-hit Tanjung district of north Lombok, a distraught family was burying their 13-year-old daughter who was struck by a collapsing wall and then trampled when Sunday's quake caused a stampede at her Islamic boarding school.

Villagers and relatives prayed outside a tent where the girl's body lay covered in a white cloth.

"She was praying when the earthquake happened," said her uncle Tarna, who gave a single name. "She was trying to get out, but she got hit by a wall and fell down. Children were running out from the building in panic and she was stepped on by her friends."

Nearly 68,000 homes were damaged or destroyed in Sunday's quake and 270,000 people are homeless or otherwise displaced, according to the disaster agency's latest update.

"People are always saying they need water and tarps," said Indonesian Red Cross spokesman Arifin Hadi. He said the agency has sent 20 water trucks to five remote areas, including one village of about 1,200 households.

In Kopang Daya, injured villagers got their first proper treatment Thursday after medics arrived with a portable X-ray machine and other supplies. They tended to an elderly woman with an injured face and hips who had been knocked over by her grandson as they scrambled from their house.

Indonesia is prone to earthquakes because of its location on the "Ring of Fire," an arc of volcanoes and fault lines in the Pacific Basin. In December 2004, a massive magnitude 9.1 earthquake off Sumatra triggered a tsunami that killed 230,000 people in a dozen countries.

Wiranto, who goes by one name, said the government will develop a plan to rebuild communities on Lombok, which like its more famous neighbor Bali is a popular tourist destination with powder white beaches, mountains and a lush interior.

"We will make a new roadmap for what we are going to do after this emergency response is finished," he said. "For example, how we can deal with the number of damaged houses, mosques, schools, hospitals. Who will rebuild and how much money and how long it takes."