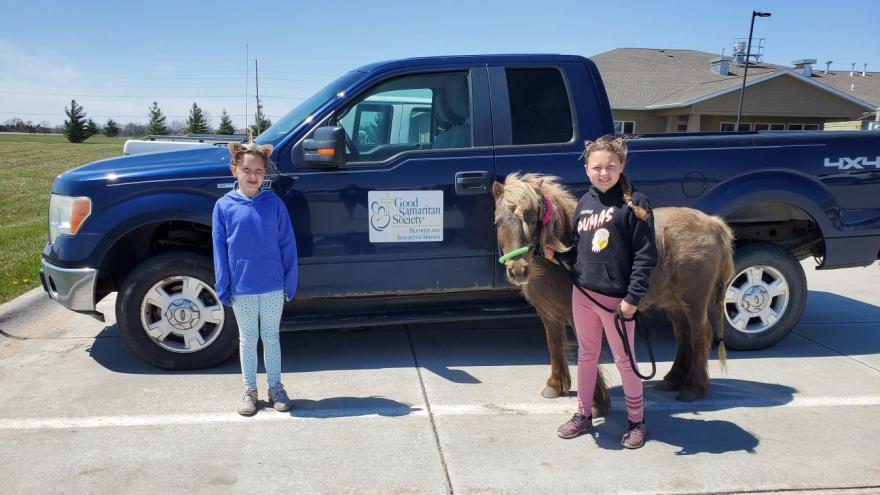 Eleven-year-old Jorja, right, with her eight-year-old sister Journee, left, wait to bring Peanut to the windows of a nursing home.

(CNN) -- Eleven-year-old Jorja Boller wanted to cheer up older adults in the nursing homes around her hometown of Beatrice, Nebraska.

And when she thought of who makes her smile when she feels lonely, she knew her little pony Peanut would have to pay them a visit while they are isolated during the coronavirus pandemic.

"We brushed him and braided his hair with some colored pipe cleaners," Jorja told CNN. " And we put on a unicorn horn but he shook that off!"

Jorja and her 8-year-old sister Jurnee led Peanut up to the windows of the nursing homes. Staff on the phone helped facilitate conversations with the residents.

"I would talk to them ... and Peanut was acting up so he put on quite a show." Jorja explained. "And of course, my sister was dancing around."

The residents really enjoyed seeing Peanut. Some would follow the girls and their pony from window to window.

Jorja visited three nursing homes with Peanut and has promised to return with him again. When the pandemic is over, Jorja plans to get the residents more involved.

"They really wanted more than anything to pet him." Jorja told CNN. "I am hoping I can have them do more with him soon. He was a little cranky but after a while he got used to it and liked it."

Jorja is developing a program for the residents to be able spend more time with Peanut. There will be grooming, petting and plenty of treats to feed him.

A helping hand for older adults

Jorja is already well known at the nursing homes. She started volunteering at the facilities when she was about 7, when she helped out by opening doors and playing games. She also started her own annual fundraiser called "Gifts for Grands" which raises money for Christmas gifts for the residents. Last year she raised enough to give out 550 presents.

Jorja has received recognition from the Good Samaritan Society and the Prudential Spirit of Community Awards -- but for her it's the smiles from the elderly that inspire her.

She is now teaching her younger sister Jurnee how to help out at the nursing homes.