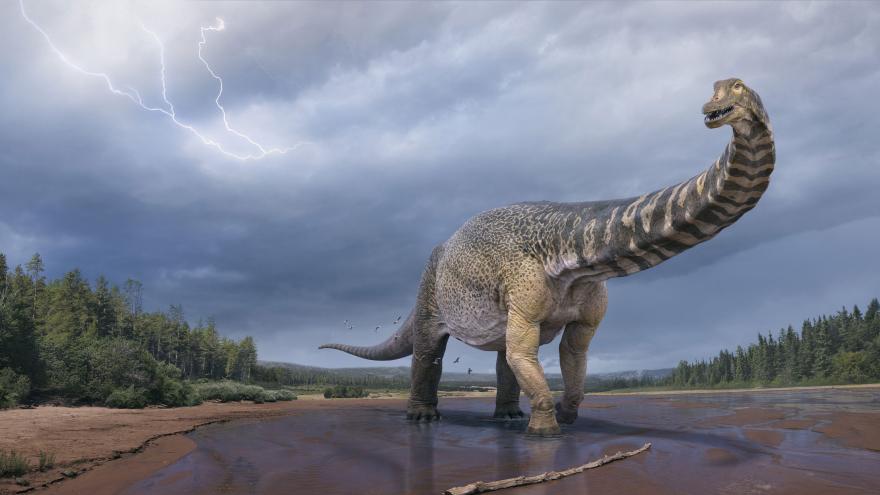 Meet Cooper, the largest dinosaur fossil ever recovered in Australia and one of the largest creatures to ever roam the planet. - Courtesy Eromanga Natural History Museum

(CNN) -- The things that fascinate us most tend to be wonders we have never seen up close.

It's our natural response to be curious, to question what it must be like to fly by Jupiter and its moons or live among dinosaurs.

Dinosaur bones have preserved information from millions of years ago, which scientists can use to model what they looked like, the way they moved and how they lived.

We'll never see long-extinct dinosaurs -- unless some John Hammond figure creates his own Jurassic Park for real. But science is bringing us ever closer to what the world was like when dinosaurs reigned and revealing the wild land before time.

Meet Cooper, the largest dinosaur fossil ever recovered in Australia and one of the largest creatures to ever roam the planet.

They say the waiting is the hardest part, and Cooper has certainly paid those dues. The titanosaur, which lived 90 million years ago, was first discovered in southwest Queensland in 2007, but the skeleton remained a mystery as its enormous bones resided in buildings hundreds of miles apart from each other -- until now.

The plant-eating dino was roughly as long as a basketball court and as tall as a two-story building, sporting a long neck and tail similar to Brachiosaurus.

The discovery has led researchers to believe there is a "whole new dinosaur frontier" waiting to be discovered in Australia.

Ever wake up bleary-eyed and say to yourself, "I feel old"? Imagine how these critters must feel. Microscopic Bdelloid rotifers have been revived after slumbering in the Arctic permafrost for 24,000 years.

The tiny multicellular animals live in watery environments and have an incredible ability to survive. Russian scientists found the creatures in a core of frozen soil extracted from the Siberian permafrost.

Once the rotifer thawed out, it was able to reproduce and even chow down. Talk about a long-deserved meal.

Frozen environments like permafrost act like a preservative for ancient life -- and rotifers aren't the only thing to be recovered from it recently.

Scientists have finally uncovered the cause behind Earth's most spectacular light show: aurora borealis, or the northern lights.

These brilliant lights in the higher latitudes are produced by electromagnetic waves during geomagnetic storms, according to the researchers.

In order to make this discovery, scientists actually simulated the interaction in a lab.

The findings could help astronomers understand more about space weather -- like storms caused by the sun that could impact our global communications.

If you're a Barbie girl living in the Barbie world, life in plastic is fantastic -- especially if it keeps that plastic from ending up in our oceans.

Mattel is launching a new line of Barbies made from plastic that would otherwise become ocean waste. The Barbie Loves the Ocean collection, with its appropriately summery theme, includes three dolls, a beach shack play set and a starter assortment play set.

This is the company's latest move to reach sustainability goals, something other toy companies are also pursuing after decades of relying on environmentally destructive plastic in their products and packaging. Globally, 11 million metric tons (24 billion pounds) of plastic waste flows into the oceans every year.

In addition to companies aiming to reduce ocean waste, solutions like Amsterdam's The Great Bubble Barrier are catching plastic before it reaches the ocean.

Hundreds of mysterious fast radio bursts have been detected in space.

These bright, millisecond-long flashes of light are often traced to distant galaxies, but their underlying cause remains unknown.

Detecting these fleeting bursts could help astronomers map the universe. And, of course, the more bursts they find, the closer scientists come to understanding the mysterious mechanism that sends them.

Some more intriguing highlights from this week:

-- Medieval men and women -- even friars -- sported some fancy footwear, but they paid a painful price for their pointy fashion.

-- The Perseverance rover has set off on a road trip on Mars, and it's taking the scenic route.

-- The discovery of a shackled skeleton tells the grim story of slavery in Roman Britain.

-- New NASA administrator Bill Nelson sat down with CNN to discuss SpaceX's Mars rocket, UFOs and going back to the moon. (And check out the new lunar spacesuits!)

Like what you've read? Oh, but there's more. Sign up here to receive in your inbox the next edition of Wonder Theory, brought to you by CNN Space and Science writer Ashley Strickland, who finds wonder in planets beyond our solar system and discoveries from the ancient world.